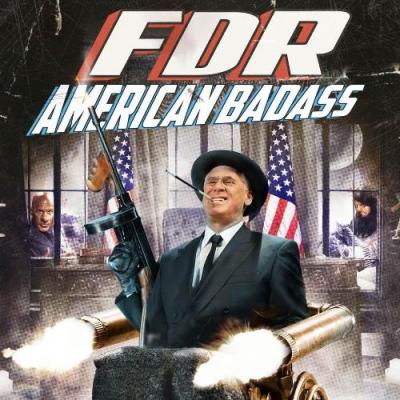 Allow me to begin with a little nugget of information on this movie. It's only listed quote on IMDB is Abraham Lincoln saying "Emancipate that ass." That should give you some kind of idea on what manner of movie we're talking about here. This is most definitely the kind of movie that should come with a disclaimer that reads "WARNING: Smoke a joint before viewing".

This movie was simultaneously one of the stupidest and most brilliant films I have ever seen. The Netflix description reads "After contracting polio from a werewolf bite, FDR and a team of historic figures seek victory in World War II by defeating an army of Nazi werewolves," and honestly, I can't think of any better summation. That sentence alone is entertaining, much less an entire movie on the subject. I was absolutely rolling through the entirety of it.

The film was purposefully made to appear incredibly low budget. Crappy digital effects, silly creature makeup (the werewolves looked like low budget Wookies), and "low-budget" props (I'm fairly certain those "rocket launchers" were made of PVC pipe) all added into a movie that was filmed nearly entirely on an indoor set make for a very silly feel to the whole durned thing. That was the key right there, that they did it in a way that was silly, not stupid like "Nazis at the Center of the Earth".

The film's sense of humor was abrasive and offensive,, which is why I liked it so much. Casual racism, casual sexism, nonchalant adultery, presidents smoking joints... All of this done in a way that no one could possibly take offense to. This movie is fucking magical.

To be truthful with you, this is the kind of movie that cannot be adequately verbally reviewed. It's a must watch. It has firmly lodged itself into my "favorite movies" list, and it seems to be in no fear of going anywhere.