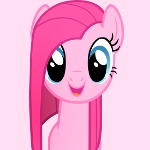 So it was two years ago now that the great website we all call home was created. Or well, maybe not all of us call this place home, but some people do like me, and well I do believe it is about time I said happy birthday and thank you to it. So if you will stick with me, I am going to tell a small tale, about how a guy known as Aaron, or more commonly, Pinkie D Pie, came to a website known as MLPforums and had a grand old time, and finally broke there shell and made some friends.

So it was a little over a year ago, or more accurately, nearly a year and a half ago, that a guy buy the name of BlogBlogLast all over the internet was reading though an issue of Gameinformer magazine. They mentioned a term known as Brony, a term this kid had never heard of. He laughed at the though of males liking MLP and went along on his happy way. Now fast forward a few months and the kid now needing something to do. So what could he do but research this term known as Brony, and find out more about it. So it was one faithful night in the dark of his room, a few days before school started for after Winter break, that this kid known as BlogBlogLast watched the first episode of MLP:FIM and fell in love. It was months later before he would finish watching the first and second season, and a month after that before he would find a website known as MLPforums and make an account known as Pinkie_D_Pie. When he first joined these forums, he did not go out of his way to make friends. He simply posted in random topics, and looked around at all the bright shiny things he had seen before. You see this kid was quite shy, and the one time he had ever known a home on the internet was on a website known as Roblox.com, there forums, or at least the RP section of that forums. So it was only a few days into this kids days of fourming that this kid found a topic known as the Last Poster Wins thread. He posted there, and posted there. It was during the summer of 2012 that this kid would meet his best friend, thanks to the forums. It was during the summer of 2013 that this kid would meet one of the most epic people here on the forums. He made other friends, but he never really stuck to them or messaged them, which is something he has regretted for a long time. Ehh, I don't know where I'm really getting at now, so I guess this is the end of that story. Basically what I am saying is that if you ever were trying to be my friend and I just sort of ignored you, I'm sorry.

Okay, now that that is over, let me go ahead and thank everyone on the forums for being epic. Personally, I love everyone here, but the two people in the story are two people I have to mention.

The first is a guy known as @kappa214, or to me as Doom2053. This guy is epic, and that's probably the smallest word I could use to describe him. It didn't take long for him to become like my best friend ever, even though we live so far apart. I know people say you can't have true friends on the internet, but I beg to differ, because he is probably my best friend, ever. So it was during the summer of 2012 that we met, and well, I may not remember the exact way we met, I think it had something to do with RPlaying and Steam, but I may be wrong, but anyways we met and quickly, as least to my knowledge became really good friends. Ehh, I'm going on again, but I just want to say thank you for being a great friend.

The second person who I am going to mention is . One of the most epic people on the forums, and another person who I consider to be one of my best friends. We met during a RP. I think she messaged me after I changed my profile pic, and then what do you know, we quickly began a conversation, and soon I had another friend on the forums. Even now, I get so happy whenever I see another message because I know that there is someone to talk to. The other thing is that I never message anybody, like ever, so thank you for messaging me first!

There are a ton more people out there that deserve to be mentioned, but so many of them changed there name that I know longer know them.

A few things I do need to mention however are two topics, the Last Poster Wins Thread, and the General Chat Thread.

The Last Poster Wins thread is my home within a home. It's my favorite place to be on the forums, because I know there are so many awesome people there. So this is just a big hello and thank you to everyone around that part of the forums.

The General Chat Thread I did not discover for awhile. Or well I knew about it and posted small posts there from time to time, but never made to many things. It all changed when I really started posting there, and discovered just how epic everyone is there. I don't know who is left to see this, but if we ever talked on the GCT then thank you. Oh and just because, this is what the GCT did to me...

Anyways, that is about all I have to say, but let me go ahead and thank everyone on the forums, not just the two I mentioned, but everyone, because all of you are awesome. Anyways, see you around the forums, possible in the Last Poster Wins theard.(Where your never going to beat me!)

-Pinkie D Pie(Previously: TGAP Trixie Sparkle, Luna Sparkle, DJ-DASH3, Shadow Stalker, TGAP Babs Seed!) Maybe one of you remember me as one of these!