It is unwise to venture down this road. Your actions will make my anger explode! – Zecora

This episode introduces the very convenient Zecora to the show. This magical Zebra eventually became a kind of second mentor to Twilight, a role she was supposed to play more frequently, according to Faust. However, in her first appearance, she is feared as an evil enchantress by the Mane 6, with the notable exception of Twilight.

We start with Twilight and Spike wandering through Ponyville, which seems to have become a ghost town for some reason. Spike suggests pony holiday, his own bad breath (no worse than usual, which implies either that bad breath comes part and parcel of eating gemstones, or that Spike doesn’t clean his teeth) or even Zombie ponies. 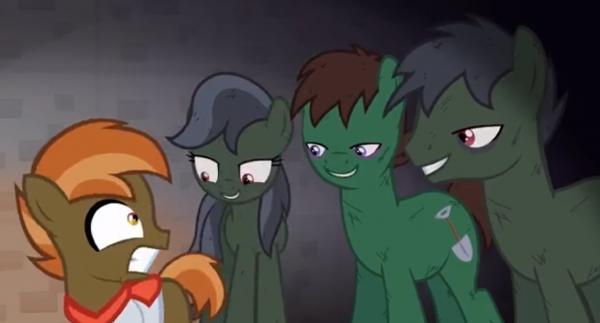 “GGRRAAAIIINNNS!” PS: Don't mine at night!

Passing by Sugarcube Corner, their attention is attracted by Pinkie, who tells them to get inside quickly before “she” gets them. Finding the rest of the gang there (along with Apple Bloom) Twilight wants to know why they’re all hiding in the dark. Applejack points out the window at our new zebra friend, Zecora. How they know her name without knowing anything else about her is a question mark for me. Anyway, Twilight tells them about zebras, that her “garish” stripes are not a fashion choice but something she was born with; Rarity is quite overcome with horror at the thought. The others say that she lives in the Everfree Forest. We also get a bit more information about said Forest, furthering a comment made by Applejack in the pilot: “Folks say it don’t work the same way as Equestria!”

Twilight tries to talk some sense into the others, along with some well-placed snark at their ignorant assumptions of evil intentions. Apple Bloom tries to chime in in support of Twilight, but is rather bluntly brushed aside by Applejack, because the “big ponies are talking”. When Twilight tells the others that if they were brave enough, they could talk to Zecora and get the real story, she decides that is exactly what she will do. She leaves unnoticed, to follow Zecora as she heads back into the Everfree Forest. 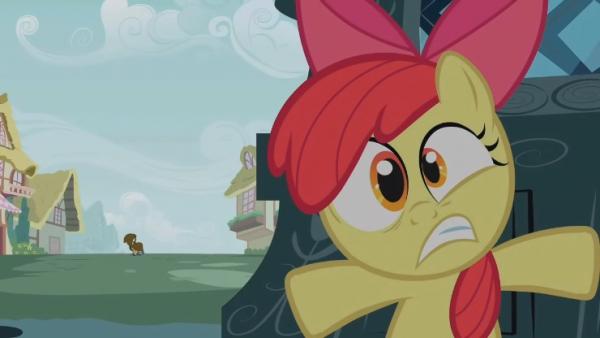 Finally noticing an Apple Bloom-shaped hole in the scenery, the rest run out to find her, leaving Spike on guard. They follow all the way into the Everfree Forest, and right into a patch of pretty blue flowers, AJ grabbing her sister and lifting her onto her back. When Zecora tries to warn them about the Poison Joke (a play on poison oak… well, no dur), they take it as the evil enchantress threatening them, and shout at her to go away.

Twilight is adamant that there is no such thing as curses. This is forgivable, since we don’t hear about curses being real until Season 3, but since magic can ban ponies to the moon or cause eternal night, one might think she’d be a little more open to the idea of magic being used for evil purposes. Applejack says as much, warning Twilight that sometimes “Old Mares’ Tales really are true.” The ironic thing is, all of the Mane 6 saw an Old Mares’ Tale come true in the pilot, so they should know this.

Despite her doubt of the whole evil enchantress spiel, Twilight finds herself having nightmares about Zecora being evil. In the morning, she finds she has a problem… the opposite problem than one might expect: her horn has been cursed with spots and now flops around in a way that makes me wonder if this episode should have been censored… 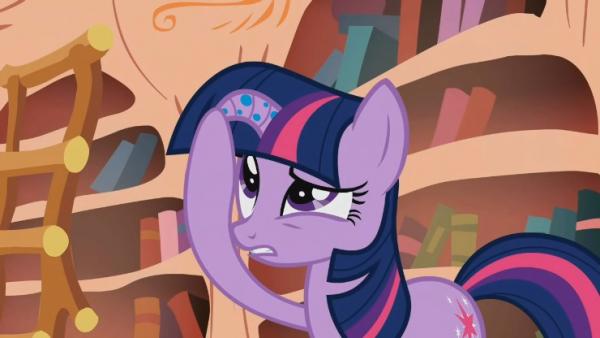 Looking for an explanation, Twilight dismisses Spike suggestion that this might indeed be a curse, as well as refusing to look at a book called “Super Naturals”, believing it to be about the supernatural. One space can mean a lot. Soon, her friends start arriving, each “cursed” in a different way: Pinkie Pie can’t speak because of a swollen tongue; Rarity’s coat has grown out until she resembles Fluffle Puff; Applejack has shrunk down to become a different form of apple-based cider; Rainbow Dash’s wings are on upside down, making her crash into things; and Fluttershy’s voice has become 20% deeper (Okay, I know, that meme is overused, but I so seldom employ it, you’re just going to have to forgive me.) Spike, of course, finds it all hilarious and gives them all insulting nicknames. He has trouble with Twilight at first, but eventually comes up with something for her too.

Apple Bloom, blaming herself for the others’ misfortune, walks out to find Zecora, so she can make things right. She gains a teeny-tiny stowaway in Applejack, who notices her leaving and jumps into her big-little-sister’s mane. The others of the Mane 6 notice she’s gone, and have a brief panic attack over stepping or sitting on her. Pinkie Pie even checks under Rarity’s coat, eliciting an indignant, “Have you never heard of ‘personal space’?!” Some people think Pinkie replies to this question with a blunt “Nope”, but I personally think she’s just telling the others that Applejack isn’t in there. Realizing Apple Bloom is also gone, they decide to head out to Zecora’s hut in the Everfree Forest.

Meanwhile, Applejack pops out of her sister’s mane and demands she turn around. AB simply refuses, since she’s now the “big sister”, and deposits her on a branch over a ditch. This leads to one of my favorite quotes from Applejack ever: see Highlights below. She isn’t stuck for long, however, since as the others make their way into the Forest, Rainbow accidentally crashes into the tree where AJ is, ending up with said pony in her mouth. AJ wiggles free, cobbles together a bit and bridle and shoves them into RD’s mouth. A well placed tiny knee to the stomach sends her new mount up, up and away.

Meanwhile, the rest find Zecora’s hut, complete with strange masks, various ingredients, and a bubbling pot of something green. When Zecora herself wonders aloud where Apple Bloom is, even Twilight becomes convinced that Zecora is evil and hankering for some pony soup. Cue Spitty Pie and Hairity's high-pitched shrieks, (EEEEEE!) along with Flutterguys resonant baritone yell (AAAHHH!), a short scene which has me laughing every time I watch it.

Along with RD and AJ’s arrival, they break down the door and confront the evil zebra witch. Rainbow’s wild flying starts wrecking the place, and even knocks over Zecora’s cauldron. She is outraged at their intrusion and accusations of witchcraft, and literally ends up butting heads with Twilight. She also has to deal with a minor major assault by Applejack, who valiantly ropes her ear. 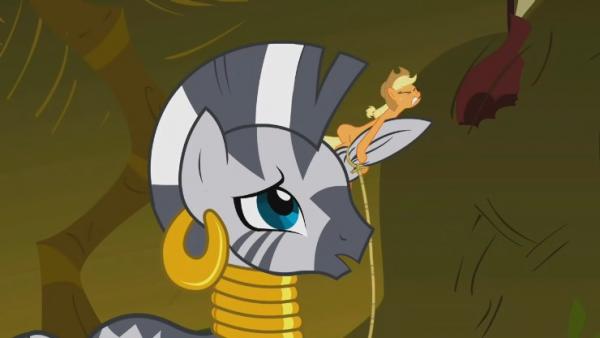 Who is this wrestling with my ear? I find this pony very queer.

Apple Bloom then appears in the doorway, and the truth comes out. Zecora had heard from AB about the Mane 6’s afflictions, which were as a result of the Poison Joke, and was making up a bubblebath cure, with AB going out to collect some necessary ingredients. Zecora’s explanation in rhyme confounds Applejack, who protests from her perch on the zebra’s ear, “Would somepony please talk normal?” Hypocritical humour at its best. She also amusingly takes offence at Twilight’s statement that their problems are just “little jokes” the plant has played on them.

When Twilight asks where the cure comes from, Zecora shows her a book; the very one she dismissed because she misread its title: “Super Naturals”. Thus is the moral for this episode delivered: “Don’t judge a book by its cover”, applying equally to the book and to the Mane 6’s treatment of Zecora. One bubble bath later, everyone is back to normal, and Zecora has been accepted as an honorary citizen of Ponyville.

Pros:
The humour in this episode is spot-on, from Spike’s dubbing of the ponies with nicknames reflecting their problems to Applejack’s many hilarious lines. The lesson is a good one, not to let outside appearances deceive you and to make sure you look a bit deeper to find the truth of the matter, and is delivered in a very natural way. Although Pinkie’s song is pretty standard for her, being a “work in progress”, the true delight is Flutterguy’s “smooth jazz” rendition, complete with beatnik backing.

Cons:
The plot is rather straight-forward, and doesn’t really offer any surprises. Then, again, it really doesn’t need to, so this is nitpicking.

The exchanges between AJ and AB are priceless.

AJ pops out of AJ’s mane
AJ: You turn around right now, Missy!
AB: No.
AJ: “NO”? You can’t disobey a direct order from your big sister!
AB tosses AJ up in the air and catches her, then puts her on a tree branch.
AB: Sorry, Applejack, but I’M the big sister now!

Spike has a rare opportunity to mock the others for once:
Spike: This is hilarious! We’ve got Hairity, Rainbow Crash, Spitty Pie, Apple-teeny, Flutterguy and…
Turns to Twilight, and pauses
Spike: …eh, I got nothing. Twilight Sparkle? I mean seriously, I can’t even work with that.
Twilight: Eh he he. This is no joke, Spike.

5 – Celestia Rank: A great episode. It will be re-watched frequently.
4 – Luna Rank: A good episode, but with one or two problems that prevent it from being great.
3 – Spike Rank: An average episode. Positives and negatives are balanced.
2 – Discord Rank: Worth watching once. After that, turn it to stone and put it in the garden.
1 – Nightmare Moon Rank: Send it to the moon!