"Some of what I will tell you relates to events in the future. Not only on this planet but also on others whose existence you don't even know of. But my knowledge is scientific fact. Now, Davros has created a machine creature, a monster which will terrorise and destroy millions and millions of lives and lands throughout all eternity. He has given this machine a name, a Dalek. It is a word new to you, but for a thousand generations it is a name that will bring fear and terror."

Interesting little tidbit: Doctor Who was originally meant to be an educational show of sorts, with each serial presenting a new period of history for the characters to explore. The Doctor himself wasn't even created to be the main character, just the means as to how the real protagonists traveled through time. Thus, the original producers were trying to steer clear of the normal tomfoolery you'd see in sci-fi shows in the 50's and 60's. This was to be a classy affair, you see, and the number one rule was that there were to be no robots or bug-eyed monsters.

An admirable effort, to be sure, but to be frank, it was one that would have severely limited the lifespan of the show. There's only so many times you can do "people get captured by ancient civilization" before the show gets stale, and while the initial, totally bizarre concept of a police box actually being a gigantic time machine on the inside was enough to peek people's interest, most people back then probably wouldn't hold interest in the show long after that.

Yes, as utterly unique a concept it is, the adventures of the Doctor and his companions would have faded into oblivion after a couple of seasons if this original plan had gone unchanged.

Fate decided otherwise. The production of the first serial, involving the Doctor's introduction and a couple of angry cavemen, was drawing to a close and the producers were stuck without a story to move ahead with into the next story. Looking for anything to produce, the crew were stuck with a script written by then 33 year old Terry Nation. Unlike the type of stories that the producers intended for the show, this one was most definitely a sci-fi tale, and one that even had antagonists that was both robots and a bug-eyed monsters.

But these beings weren't just guys in suits. Nation had something else in mind. Having grown up in WWII, he wrote these new foes to be allegories for the Nazis; faceless, oppressive, and ruthless conquerors who sought total domination of the universe through the destruction of anything that did not meet their ideals. As designed by Raymond Cusick, they were made to look more like tanks than living things, hinting at the lack of humanity that now defined the creatures forced to lived inside these exoskeletons after years of their hate-fueled war on others left them mutated beyond recognition. They never spoke but instead shouted, always angry and always ready not just to kill, but to exterminate, as if everything else was merely vermin that needed to be wiped out.

It didn't fit the original idea behind the show at all, but hey, when you have lemons, produce them because no other scripts are available. And thus, the serial was made, and on December 21st, 1963, the world caught their first glimpse of Terry Nation and Raymond Cusick's weird, scary, and all-around fantastic aliens, the Daleks... ...and the rest is history.

It's a known fact that if it wasn't for the Daleks, Doctor Who wouldn't be around today. The overnight popularity of the creatures secured the show firmly in the public's eyes and kept it from fading away. The design of the Daleks, intentionally or not, were ready made for mass marketing, and the BBC took full advantage of that. "Dalek-Mania" became a thing, and any new episode featuring them became the thing everyone had to watch that week. Entire generations in the U.K. shared the experience of "hiding behind the sofa" in fear of the Daleks, who became as iconic as the Doctor himself, if not more sure. The show was able to ride that success to the point that when they more or less went on hiatus during all of the Second Doctor's run and half of the Third Doctor's, Doctor Who was able to survive.

It kicked the door wide open for the creative process behind the show too. The reason this show has been able to stick around for fifty years is that its able to constantly reinvent itself do pretty much whatever it wanted to. Having the characters escape a prehistoric fight for survival and then have them encountering alien warriors on a post-apocalyptic planet in the next story demonstrated the limitless possibilities. The Dalek's inception is almost as important as the idea that the protagonist would constantly regenerate into a completely new character in defining this show as one that would never easily be defined.

It seems the Daleks growing stronger in opposition to the Oncoming Storm is a two-way street. 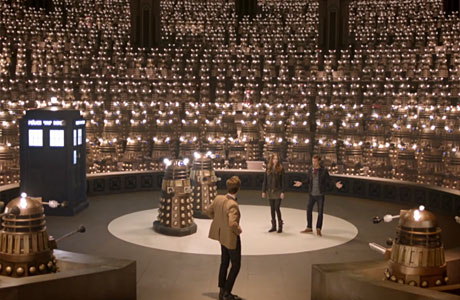 So yeah, I know we already celebrated the Doctor's 50th anniversary, but certainly some of the greatest villains of all of science fiction and fantasy deserve some love, too. So here's to 50 years to the Daleks, the reasons we still care about the Doctor after all this time.

For although the Daleks will create havoc and destruction for millions of years, I know also that out of their evil must come something good.

Have some awesome bad guy music.