Her talent is recognized by ponies such as: Hoity Toity, a fashion bigwig (literally) from Canterlot (Suited for Success – review coming soon

); Sapphire Shores, the Pony of Pop, who also mentions that Rarity has been given at least one rave review as an up-and-comer in Clothes Horse Magazine (A Dog and Pony Show); the ruler of the land, Princess Celestia (A Canterlot Wedding); and in her latest focus episode, Prim Hemline, the fashion community of Manehatten and even a costume designer for the Equestria equivalent of Broadway (Rarity Takes Manehatten). So her skills as a fashion designer have been recognized in at least two major cities. It’s pretty apparent that if it were not for the fact that she consistently puts her friends ahead of her fashion career, she would already be a huge success. It’s not that she isn’t good enough to leave them all behind and achieve her dreams. She chooses to remain with her friends, and she is not willing to sacrifice her friendships for success, give or take the odd wobble.

This is not a result of serendipity. She was not born into a high class family; quite the opposite, in fact, as her parents and Sweetie Belle make entirely clear. She has lifted herself up to that level, through nothing but her own hard work and determination. In Sweet and Elite, she proves that she fits right in with the most upper class ponies in Canterlot. All it takes is one chance meeting with Fancy Pants to set her up as the Pony Everypony Should Know. Even if that was a case of right time and place, she still made the best of the opportunity, as she later impresses the upper class ponies in the absence of Fancy Pants himself. Even in real life, making the right connection is often necessary for one’s virtues to be recognized, so I believe Rarity should still be given credit for making the most of her lucky break. And despite knowing who and how important he is, she didn’t just sycophantically agree with everything he said, like the hangers-on were doing. She was willing to vocally disagree with him. Finally, that wonderful accent, darling? That sort of accent has to be worked on and polished, much like a diamond. In many senses, she is a self-made mare. Which bring us to the next point.

She owns her own business, Carousel Boutique, and she runs it alone. She has no employees, purchases her own supplies, finds her own raw materials and she makes all her own dresses (I’m looking at you, Suri Polomare). With the possible exception of Applejack, she is the one who works the hardest out of all the Mane Six, and even then, Applejack has her family to help her, while Rarity goes it alone. Related to this, she is trendy, and I mean that in the most positive sense. Rarity does not follow fashions, for the most part. She actively looks forward and tries to anticipate what fashions will be popular in the near future, and she strives to stay ahead of the game. Another thing she works really hard on is her appearance, and that is the next thing I want to look at.

She is gorgeous. That mane deserves its own billing in the credits. Purple being one of my two favorite colours doesn’t hurt her case either (the other one is green, if you were wondering

). I’ve also always been partial to ladies with blue eyes, and Rarity’s peepers are just the right shade. The only pony (both in universe and out) who can compete in the beauty department is Fluttershy. The indications are that (apart from mane extensions

) Fluttershy is beautiful without making any effort to be (just look at how little mud her mud mask needs in Green isn’t your Colour) whereas Rarity works at being beautiful. She wears false eyelashes, frequently goes to the spa, and apparently brushes her mane a hundred times before she goes to bed and uses curlers. She brings out her own beauty. To me, the essence of Rarity is bringing out the hidden beauty in things. She strives to be better in her appearance and her behavior, and wants others to be better as well. She takes raw materials and produces beautiful dresses from them. She finds gems hidden in the ground, and if they weren’t already cut and polished naturally, no doubt she would cut and polish them as well. Out of all the ponies, her cutie mark is arguably the most appropriate to her character. She is also amazingly cute. Just look at her expressions. 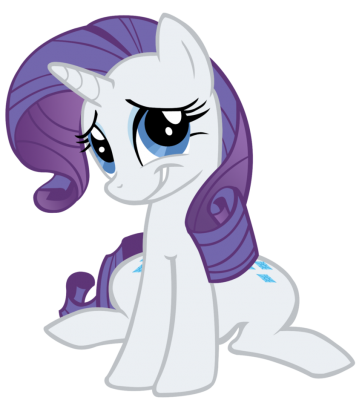 How can you say "no" to this face?

Finally, whether you agree with how she employs her ability or not, Rarity is able to charm just about anypony. And she does it without ruffling any feathers or making anyone feel bad to have her turn her attention to them. Even when she does it to get something for herself, she makes her target feel good about it.

Rarity is often shown to be very insightful into her friends. She recognizes when others are putting on a brave face, like Rainbow Dash in Sonic Rainboom. She noticed that something was bothering Twilight in Lesson Zero. She was the one who comforted Spike after he rampaged through Ponyville in Secret of My Excess, and defended him against Rainbow’s teasing in Dragon Quest, before trekking half-way across Equestria with Rainbow and Twilight in a dragon costume she made herself with no prior notice in order to keep an eye on him. And finally, despite being in a deep depression, she came running to the rescue when she thought her dear pet Opal was caught in a tree in Suited for Success. When the Cutie Mark Crusaders were found out to be Gabby Gums in Ponyville Confidential, Rarity was the only one who actually tried to explain why what they were doing was wrong, instead of just turning her back to three young fillies who had made a mistake and felt terribly guilty about it. She forgave her friends at the drop of a cat (pun intended) in Suited for Success, forgave Sweetie Belle for ruining the cloth she spend a long time making in The Stare Master, and forgave Fluttershy when she said some extremely hurtful things to her and Pinkie Pie in Putting your Hoof Down.

While Twilight may be the acknowledged as the brains of the Mane Six outfit, Rarity shows that she is far from vapid herself. She very quickly gets the number of the Diamond Dogs, and outfoxes them thoroughly by the end of the episode. In The Crystal Empire, she not only learns a traditional hat-making method overnight, but also manages to think up excuses for Spike’s sudden departure in order to keep the crystal ponies from realizing something is wrong. She came up with a great idea to explain why they had a fake Crystal Heart, which Applejack totally ruined. She also showed her ability to learn things quickly when she volunteered to work on Cadence’s hair, and despite skipping a step, she managed to correct the resulting disaster in time (Game Ponies Play). She also delivers her fair share of snarky lines.

Not only is Rarity both beautiful and intelligent, but she can kick serious flank when she wishes to. She may be a lady, but she can take care of herself. Notable scenes include her giving Applejack a roundhouse kick to the face and lugging around a huge boulder in Return of Harmony; coming just short of first place in a race alongside Sweetie Belle, and being athletic enough throughout that Sweetie Belle had no idea that it was not in fact Applejack running with her in Sisterhooves Social; facing down three teenage dragons in Dragon Quest (and delivering a fabulous line at the same time) and outright smacking Changelings in the face with a solid right hook during A Canterlot Wedding. Let’s face it, for somepony who is often called "prissy" she’s really quite a powerhouse.

Rarity is generally agreed to be one of the most entertaining ponies to have on the screen. Her flair for the dramatic and tendency to chew the scenery make her a riot to watch, and provide some of the series best lines (“I’ll destroy her!”; “Fighting’s not really my thing, I’m more into fashion… BUT I’LL TEAR YOU TO PIECES IF YOU TOUCH ONE SCALE ON HIS CUTE LITTLE HEAD!”; “Of the all worst things that could happen, this is the worst. POSSIBLE. THING! beat What? I really mean it this time…”) Of course, not everyone appreciates that aspect of her as much as I do, but I’m including it as a positive here in any case.

Now to be fair, none of the Mane Six are what you would call simple or flat characters. There is a lot of depth to all of them. Still, I feel that Rarity goes beyond the others in this category. Rarity wants good things for others, but she also wants good things for herself. She's caught in a tug of war within herself between these two motivations. For example, consider Green Isn't Your Colour. In that episode, Rarity wanted to be happy for Fluttershy and her success as a model, but she was also very jealous of the attention she was getting. And then she felt guilty for having those feelings, especially when things seemed to be going wrong for Fluttershy. That's just one example from one episode, and I could list more, but I think that suffices for the point I wanted to make here. She has her flaws, as well, which I will deal with in another entry at a later time.

Now you may have noticed that I have yet to mention what most consider the foremost aspect of her character, her generosity. That’s quite deliberate. I don’t need to defend Rarity’s generosity in order to justify her being my favourite pony. Not when there are all these other great reasons to like her. If you want evidence of that, I’d recommend getting hold of @@ghostfacekiller39: he has a list.

So that was Part 1 of Looking at Rarity, focused exclusively on what I think to be her good points. In Part 2, I want to look at some of her more questionable personality traits. I’ll examine the things fans point out as reasons not to like Rarity, and I’ll explain which ones I think are sound, and which ones I think would be

Look forward to it, and of course, stay Rarity side up!