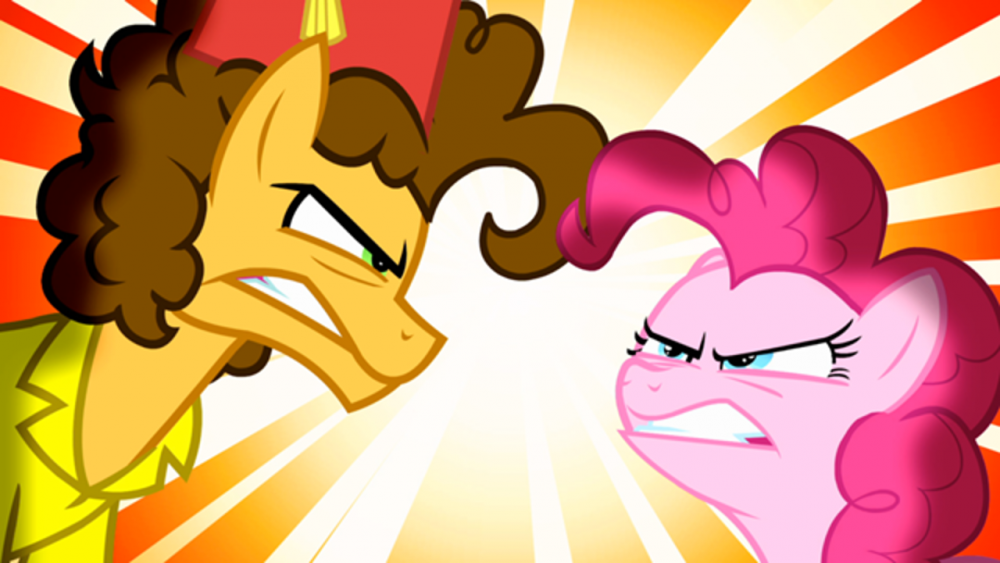 Pinkie Pie struggles as a background pony, and during season 4 she has come across as just a mere comic relief. We seem to get too much of her, and wish she was toned down. Instead, when we get a whole episode featuring all of Pinkies shenanigans it turns out great. This is because we get a deeper look at her, and the writers are more open to explore her personality.

Pinkie Pride does a great job of capturing what I love about Pinkie Pie again. Seeing her planing parties, and spreading smiles to everyone around her. She truly stayed in character in this one.

We also get visit from Weird Al Yankovic, someone who I have enjoyed in the past, and was thrilled to see in my favorite show. Cheese Sandwich seems to be his ponysona, and I love that his character shines through in the show.

His introduction to the show was also really cool. He was introduced, and the premise of the plot was revealed, all within the first 40 seconds before the opening.

Apparently this was a musical, something i'm a bit skeptical about. Over 10 minutes of the episode were song. However it worked really well, I found all the songs good, and fitting to the plot. The last one was the most memorable though.

In the first song we also get to hear Diamond Tiara sing, which was great! I have always though she gets too much hate, but I find her delightfully mean. Pinkie replies to Tiaras part with "Thanks, I guess". That's something I don't quite understand. Tiara gives Pinkie a pure compliment, it seems Pinkie isn't quite convinced. I don't think Tiara and Pinkie has any bad vibes.

Then Weird Al comes and steals the show, leaving Pinkie behind. I felt like the mane 5 were awful towards Pinkie for just forgetting her, but I guess they just got carried away by Cheese and his song. They probably thought Pinkie Pie was there with them, and was as exited as they were.

It is a explanation that makes sense, until Rainbow Dash screws it all up and bluntly states that Pinkie's parties aren't that fun. It wasn't out of character thought, but damn... That's mean, right in front of Pinkie.

Her hair deflates somewhat, but not completely as in Party of One. Some have said that was a bad thing, but I believe her hair only deflates that much when she is completely broken or for other reasons aren't herself anymore. She is really hurt indeed, but not to the extent she loses herself.

The jokes in this are some of the best I have seen in the series so far. Pinkie hiding her feeling by watering the ground, the reaction to the goof off, the goof off itself and of course the life action scenes. Concerning the live action scenes, I found Boneless dance hilarious, but the Gummy one didn't quite get me. However the best part was when Weird Al stole the smile song, classy.

Pinkie Pie did of course get her rainbow eyes and her key in this episode, and I am really happy with how it all happened. I though Pinkie would get her eyes as she saw somepony that needed to be cheered up, and then she would make them smile.

Instead she get her eyes as she realizes she has gone too far, and her own egoistical reasons has take over the true purpose of partying.

This shows how reflected Pinkie really is.

I do have some nit picks with this episode though.

What kind of name is Cheese Sandwich? I don't get his name nor his cutie mark, and how they are related to throwing parties. Are his parties cheesy? Is it because his parties seems to revolve around food? All I know is that he got a cheese sandwich at Pinkies party.

Also how Spike and Rainbow Dash ruined the joke with Twilight having a rule book. It was such a good joke, it didn't have to be explained, and certainly not twice!

Minor nit picks in a great episode! This is the best episode in season 4 this far, and ranks among the best of the entire show.

When I rate anything, I never give it a full score 10/10, because it is always something to mention that wasn't that great. With this episode I am having a hard time finding the thing that pulls it down from that score. So this should be a perfect score, but I will scrape together the nit picks I got, and add the fact that Cheese Sandwich never acknowledged Pinkie Pie until the end, which was weird.