After the credits, the Mane Six see Fluttershy off on her research trip, Pinkie displaying her usual signs of separation anxiety, until a red balloon distracts her. She rejoins the others waiting at the station for Cadance’s arrival. Twilight has planned to take her sister-in-law to the Starswirl the Bearded Travelling Museum for some sisterly bonding. How much fan art is going to require reworking now that we actually see a picture of Starswirl is anyone’s guess. Even one of his bells from his cloak (you mean hat, don’t you, Twilight? That's what you're pointing at) will be on display. (Spoiler alert… it’s that one, particularly notable for being indistinguishable from any of the others.

) The others of the Mane Six pledge to keep anything from interrupting the two Princesses personal time.

The locomotive from the Crystal Empire arrives, looking very technological. Pity they didn’t have the technology to oil the brakes… that thing is loud when it’s coming to a stop. Cadance alights, flanked by one crystal guard, and one Flash Sentry (For God’s sake, people, stop calling him Brad… you’re insulting all the Brads of the world.

) He even glances back significantly as he gets back on the train.

This scene raised a hell of a stink, with fans decrying Meghan McCarthy for lying, since she said he wouldn’t appear in Season 4. I don’t think it’s as bad as all that, and yet another example of the fan base overreacting to things. He doesn’t speak, after all. Some official sources also suggest that it was an animator who put him in there, despite him not being in the script, and you can hardly blame Ms. McCarthy for that. Nor should Derpy fans be too hard on the animator. It was animator initiative gave us Derpy Hooves, after all.

Anyway, the two Princesses head off together. No sooner are they out of sight than a spinning blue something comes zooming out of the sky towards the Mane Five, forcing them to “DUCK!” and crashing into a nearby tree. As they gather around to find out more, a familiar voice comes from the tree. It’s Discord, who claims to be suffering from the Blue Flu. His sneezes also have a variety of chaotic effects: burning all the leaves on the tree; lampposts coming to life; houses floating away in the background, etc 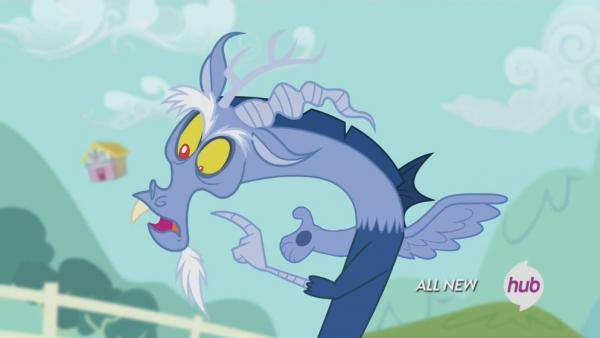 Discord is acting very pitiable, but there are indications that he might be faking… he says he is so weak that a spoon is heavy enough to drag him to the ground, yet in the next scene, he picks up Pinkie Pie and then uproots the entire tree, while looking for Fluttershy (nice reference to the “I want to be a tree” line there) so she can look after him, as friends should do. Applejack practices her Spock impression. Is it just me, or does Applejack have the best expressions in the entire show? 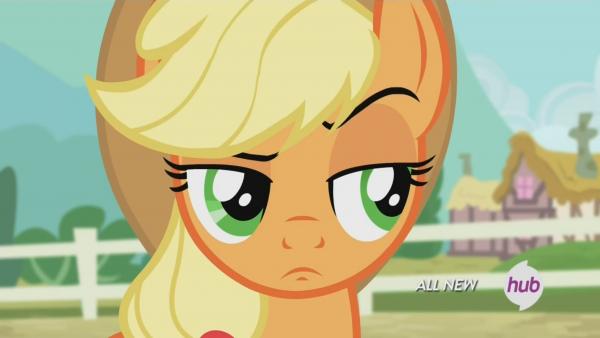 Discord reveals that he and Fluttershy have been pen pals for a while, and that while Fluttershy had told him about the trip to see the Breezies, he’d forgotten it was that day. He decides the others must take care of him instead, which makes Rainbow Dash bug out, leaving her friends to deal with the problem. I know, I know, she doesn’t feel loyalty to Discord himself, but that’s not the issue for me. She should be loyal enough to her friends not to just declare the situation someone else’s problem. It’s only a minor gripe, though. Pinkie is fine with taking care of him, but Discord distracts her with another balloon, so that he can force Rarity and Applejack to be “it” instead, to their consternation. They decide they have to comply in order to keep Discord away from the Princesses, but Discord overhears them. He “accidentally” sneezes on them and gets them sick as well, before leaving. 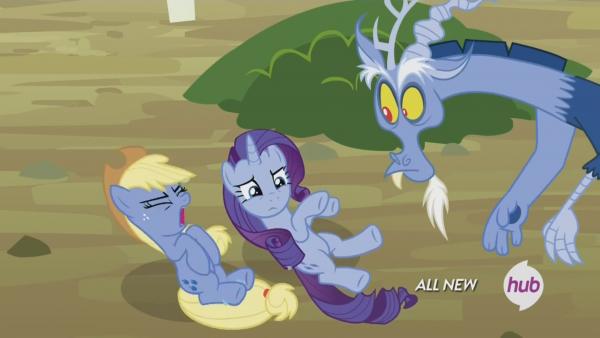 When he arrives in front of the sisters-in-law, Twilight is not happy to see him. Considering this is the first time Discord and Cadance have met in the show, Cadance seems remarkably nonchalant to see such a weird creature. Perhaps Twilight told her about him off-screen. She also conjures a health bubble to protect them both, right before another nasal assault by Discord. They agree to take care of him, and head back to the library to put Discord to bed. They are just about to leave when Discord asks for a glass of water… in song.

Being Discord, the visuals are rather frenetic, and the song itself gets faster and faster as it progresses, building up to a crescendo of Maelstromic (I know that’s not a word, just go with it) proportions. John Delancie doesn’t exactly have a great singing voice, but it’s not entirely awful. And then there’s this scene: 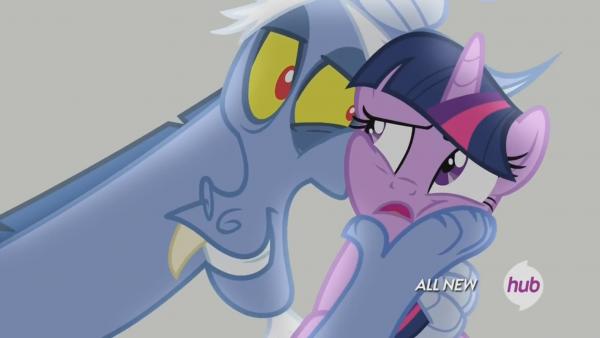 At the end, Discord drops the glass of water anyway. Realizing that he won’t stop pestering them until his “illness” is cured, they settle in for the long haul. Luckily, Discord “remembers” a cure for the Blue Flu, but they’ll have to go to the very ends of Equestria to obtain it. He tells them about a flower, the petals of which can be brewed into a remedy. They get roped in to hauling him there, towing a gigantic golden throne reminiscent of the movie 300 for him to ride. Once they arrive, they discover that Discord neglected to mention that the flower is as large as your average tree.

Combining their levitation magic, they manage to pull it out, only to discover an equally gigantic worm creature was living underneath, and is none too happy about their removal of its roof. This starts an action scene where the two Princesses use their wing and beam power to battle the worm, each having a turn getting caught in its vines and needing the other one to bail them out. Eventually they force it to retreat and block the hole with some boulders. They return with the flower to Discord, only to find him back to normal and gleefully dancing. Of course, he was never even sick in the first place!

He claims that he was thinking one day in his thinking tree, that Twilight might say they are friends, but he felt that he needed a physical demonstration of their friendship. 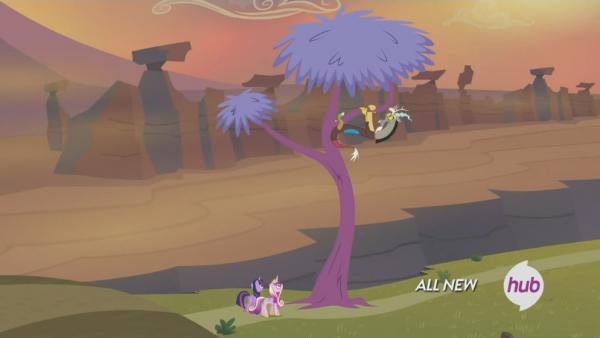 Appropriately enough, Discord does his best thinking when he’s high.

So he faked his illness in order to test Twilight’s vow of friendship to him. Or so he says, since it’s pretty clear that he was hoping to ruin Twilight’s and Cadance’s day together. Cadance, however, is not put out at all, saying that while the day didn’t go according to plan, it still gave her the time to spend with Twilight, and the events have brought them closer, despite Discord’s best efforts. He’s rather miffed about that, but about this time, his karma finally catches up with him. The worm rears up out of the ground and sneezes on Discord, getting him sick for real.

Back in Ponyville, Discord is in quarantine, with Fluttershy back from her trip and looking after him, and all he needs is one last little thing… a teensy glass of water.

Discord hugs all the ponies
Discord: Let the healing begin!
Rainbow Dash: Not it! *Zooom!*

and Rarity not being very charitable.

About Discord: I see him trolling, I’m hating. Yes, I’m back to disliking the reformed Discord. All the sense of menace he once had has been replaced by silly antics, and we’ve already got Pinkie Pie for that. He’s become rather pathetic, an annoyance rather than a legitimate threat. It’s irksome to watch, although I have to admit that John Delancie voices him brilliantly.

The plot was for the most part entirely predictable. That Discord was faking his illness should have come as no surprise to anyone, nor should the fact that Cadance would enjoy the day anyway, or that Discord would end up properly sick by the end of the episode. However, credit where it’s due… the flower being huge and the worm living in its roots were a legitimately interesting twist. *Successfully resists urge to make an M Night Shamayalan joke*

The fight with the worm is pretty cool, and at least this episode provides a reason for Twilight to have wings and more powerful alicorn magic. Still not much was riding on the princess part of the equation. It’s also the first time we’ve seen two spell users work together to levitate one object that I can remember.

The visual portion of the song was amusing to watch, but it’s definitely not an earworm like some of the other songs we’ve had in this season. John Delancie just doesn’t quite have the voice to pull off the parts that are sung.

Pros: Some nice action scenes; a Discord song, which has novelty value at least.

I’d give this one six giant flowers out of ten.