This is the episode that made me a Rarity fan. Before I watched it, Applejack was top in my book. So, with that, let’s jump in headfirst, and see why it happened.

Rarity is busy with her dress for the Grand Galloping Gala, while gushing to Opal about it. Opal is unimpressed, but every sound noncommittal she makes, Rarity interprets as an offer to help her, leaving the poor cat balancing her mistress’ sewing supplies and being rather exasperated about it.

Applejack and Twilight come into the Boutique, and despite noticing she is busy concentrating and deciding not to disturb her, they whisper loudly enough to each other to defeat the purpose of it. Rarity, exasperated herself, puts on a rather brittle smile as she turns and asks “Is there something I can help you with?”

Twilight has an old dress with a button that needs to be sown back on, but Rarity declares it to be unfitting for the occasion, and insists on making her a brand new gown for the GGG. Twilight eventually agrees, thanking Rarity for her generosity. Applejack is also lackadaisical, stating that she was planning on wearing her old work duds. They reach a compromise: AJ can wear her duds as long as Rarity can spruce them up a bit. Rainbow Dash then comes crashing through the roof and into some of Rarity’s supplies, inspiring Rarity to make a gown for her too. She decides each of the Mane Six will get a new gown from her, and then they’ll hold a fashion show! Even Rainbow Dash is excited about it. 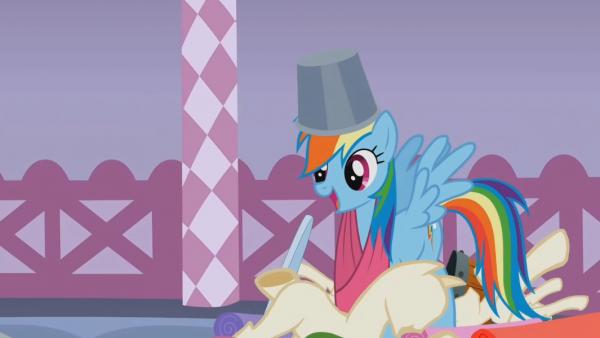 Applejack expresses concern that Rarity might have difficulty making six original stunning dresses at short notice, but Rarity laughs it off. This leads us into… it. The song that is still my favorite, even after all this time: The Art of the Dress. Borrowing heavily from Stephen Sondheim's "Putting It Together", it features Rarity having the time of her life while she designs dresses for her friends, effortlessly using her telekinesis to move around a virtual typhoon of sewing supplies, and singing about how easy it is to make dresses.

After the song, she brings her friends in to see her creations. Despite her enthusiastic explanation of how she came up with each dress, she finds her friends reactions oddly subdued. Eventually, they admit that while the dresses are nice, they’re not quite what they were imagining. Rarity is very disappointed that her friends don’t like their dresses, and stoutly insists on redoing them so that her friends will be 100% satisfied. As they leave, she quietly wonders exactly what she has let herself in for.

Having redone Fluttershy’s dress, she brings her in to see it. Fluttershy tries to hide her dissatisfaction with the new design, but Rarity picks up on it anyway, and eventually convinces Fluttershy to say what she really thinks of it. However, she regrets it when Fluttershy gives a rather scathing criticism of damn near everything about her dress, demonstrating a hidden knowledge of sewing techniques.

The episode then enters the dark reprise of Art of the Dress. I really cannot fathom why this part of the song was not included in the album Songs of Friendship and Magic. As I pointed out when I reviewed the album, it really is an oversight of epic proportions, since this half of the song is even better than the first half. Oh, well. I’m sure it will be officially available at some point in the future. Even if I have to track down Daniel Ingram myself and camp outside his house until he agrees to release it. Enough about that for now, though.

The song continues at a much more hurried pace, to reflect Rarity’s flustered state of mind, and we see each of the ponies make ridiculous alterations. This scene also provided us with the 20% cooler meme, courtesy of Rainbow Dash. By the end, Rarity is both exhausted and deeply unhappy with the results of the others’ interference, and pronounces them to Opalescence as the ugliest dresses she has ever made.

Her friends, however, are overjoyed with their dresses, even while Opalescence shows her disapproval of them. Rarity can’t even bring herself to say anything nice about them. Then Spike bursts in with (what he thinks is) good news. Hoity Toity, an important figure in the Equestrian fashion world, and a pony version of Karl Lagerfeld, has heard about Rarity’s dresses and will come to see the fashion show. Cue twitchy eye from Rarity, who realizes that disaster is around the corner.

Rarity is hyperventilating backstage as Ponyville gathers for the fashion show, and Hoity Toity makes his entrance. 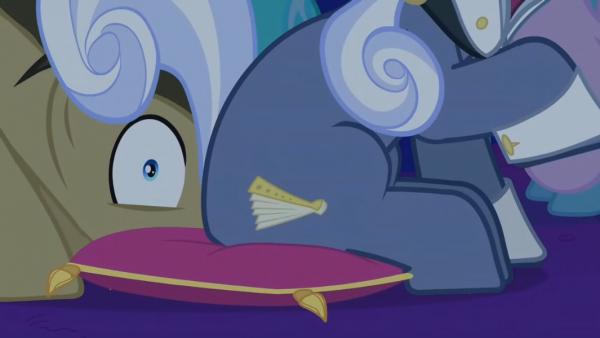 As Rarity feared would happen, the fashion show is a disaster, with Hoity Toity delivering a scathing indictment of the designs, everypony in the crowd laughing at his comments, and even the Mane Five belatedly realizing that they’ve overdone it on the redesign. Spike is entirely oblivious to this, however, calling Rarity out onto the catwalk to take a bow, and applauding enthusiastically, even though the crowd is silent except for some mutters and whispers. Despite this, Rarity is still pony enough to come out, showing a great deal of bravery and dedication to her craft.

A few days later, however, she’s a total wreck, having locked herself in her room to wallow in self-pity, or whatever it is ponies are supposed to wallow in and crying about being made a laughing stock. The friends are unable to coax her out, and try to think of something they can do to fix the situation. Fluttershy suggests “panic”, to which Rainbow Dash comments, “That’s your answer to everything!” (It is too, she suggested back in “Dragonshy” that the dragon warranted panic.) Twilight, peering through the keyhole, sees Rarity’s unfinished dress and gets an idea.

A little later, Rarity is considering exile and idly wondering what she should pack, when she hears Opalescence yowling from outside. She spots her pet, apparently stuck up a tree, and immediately runs out to rescue her, stopping short when she realizes it was Rainbow Dash who stranded Opal. However, it was for a good cause: to entice Rarity out so they can show her the dress they completed for her (using Fluttershy’s knowledge that she demonstrated earlier.) Rarity compliments them on their handiwork, and accepts their apology for not leaving her to do their dresses the way she wanted them, as they should have. She even gets a second chance to impress Hoity Toity, and the second take takes his breath away. 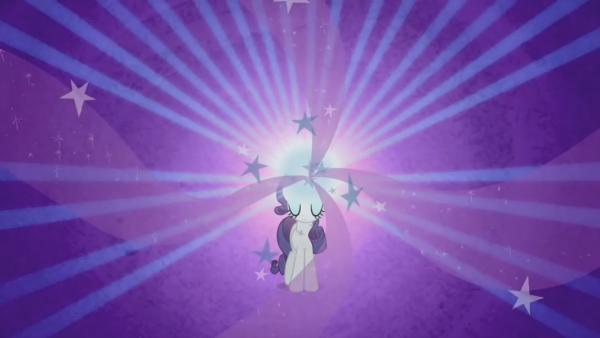 Trixie can suck it. This is how you put on a show!

Her original designs are enough to amaze the hotshot fashion icon, and he compliments her for her impressive debut, and requests a dozen of each dress to feature in his boutique back in Canterlot… by the following Tuesday, causing Rarity another bout of twitchy eye.

Meanwhile, Twilight delivers a dual moral for this episode: first, you can’t please everyone all the time, and if you try you’ll end up with a disaster; second, that you should accept a gift graciously, and not criticize it.

My Thoughts on the Episode

This episode comes very close to a perfect study of Rarity’s character. It really shows a lot about Rarity’s qualities, both good and bad. Her generosity and self-sacrifice, her skill as a dress-maker, her love for her pet and her willingness to forgive others are highlighted, as are her penchant for histrionics and her tendency to overreact emotionally. Her positive qualities raised my opinion of her character, and even her negative qualities made for an entertaining episode. Her freak-out, and her later whimsical ruminations on having to pack for exile were very amusing to watch. 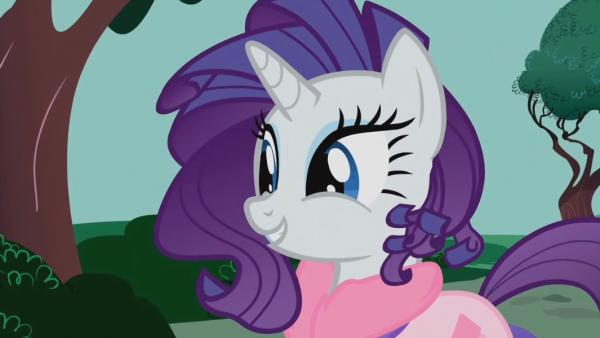 And she looks absolutely darling with her hair styled like this.

There are a few things plotholes, though. We clearly see that Rarity’s unfinished dress is in the same room she has locked herself in. There isn’t enough time for the others to finish it in the time it took her to go out to Opal, so they must have taken it at an earlier point. It’s possible that she left the room at some point, allowing them time to get in and take it out, but then why didn’t they just wait for her in the room itself? Then there would be no need for the ruse with Opal in the first place.

Another thing is that Pinkie mentions that Rarity hasn’t come out of her room for days, yet Hoity Toity (who said his time was valuable) is still hanging around long enough to be invited to the second fashion show. Why? Did he leave and come back, or just stand around doing nothing for days? There can’t be much in Ponyville to keep him busy, since he’s only there because Spike told him about the first fashion show.

Not quite a plot hole, but how could the others look at their original dresses and not like them? Conversely, how could they look at the final dress designs and not notice how unremittingly hideous they are? Fluttershy at the least should have realized it, considering her earlier comment about Prêt-à-Porter versus true haute couture. (Why does France exist in Equestria?)

Some other highlights are the second fashion show, where Rarity uses her magic to put on a visual feast, with an awesome musical theme for each pony and dress, and of course, this episode features the best song yet produced in the series (in my opinion, of course).

Pros: Great insight into Rarity. A wonderful song that is yet to be matched. Two morals for the price of one.

Cons: Some plot-holes and question marks.