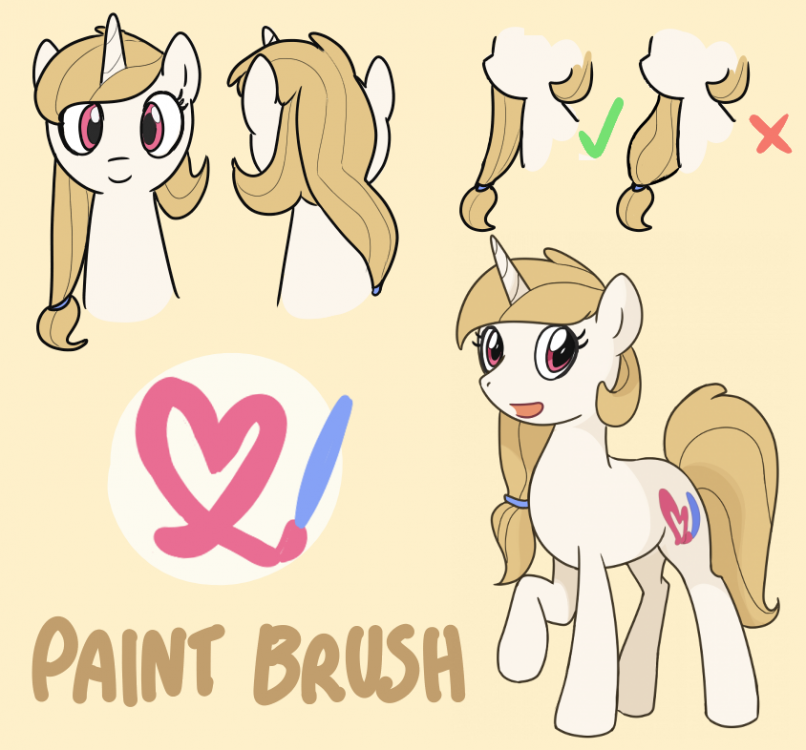 Paint grew up a simple life in Ponyville with her parents, had a normal school life, made friends and was mostly a very happy filly. She never truly cared about what her cutie mark would be, so as long as it appeared as soon as possible. The moment she discovered her destiny was to paint, she already was right into making all sorts of pieces. She got an easel for her birthday soon after, and could already name historical painters instinctively, like Pablo Picoltso, as well as certain historical artworks like The Birth of Pegasus.

But the biggest challenge for Paint is that there's always someone out there who is better than her. And her time in her art college in Canterlot was the worst time to learn that. Looking back, Paint wouldn't have learned half the things she was taught there and is very thankful for it, but the emotion part of it never made is any less hard. She was an average student here, in sharp contrast to her consistent good grades back in high school. Her teachers were a lot more analytical and had higher expectations of her, compared to her friends and parents who told her art was amazing. The one thing that she neglected to do at most of her time in her college and was holding her back was to make friends there - she was far too focused on the competitive side of things. And meeting her best friend there made things better for Paint. Learning advanced painting techniques from her friend, and Paint's friend learning not to give up on her dreams from her, both of them graduated and kept in touch, even when they lived in different places.

Paint has returned to Ponyville to set up her art studio. It's starting off small, but it has not gone unnoticed by the townsponies.

Cheerful and eager to learn, Paint Brush is a rising painter who will do anything to learn more about her talent. When she discovers something new to learn, she goes straight into it, whether it be a painting technique or about a historical painter. Her passion for painting reflects her home studio - messy, unorganised, full of unopened equipment for backup, paint all over the floors and walls, etc.

She's kind of got a one-track mind, which makes it hard to focus on other more important things. Her clumsiness and forgetfulness don't help either. If she wants to create a new masterpiece, she keeps working on it all night long. If she's late for something, she looks like as if she got out of bed. Her thinking got her in trouble more than it ever helped her. But she doesn't give up either. On the flip side, if she wants to help a friend in need, she will do it, and she will know when she's taking it too far. Her stubbornness can either hurt her or help her.

Likes: Equestrian culture, history, museums, insects, scarves, and of course art
Dislikes: Artist's block, giving up, misplacing things, the cold
Magic Spells: Paint Sometimes Likes To "Play" With Her Paint Using A Bomb-Like Magic Spell. It Explains The Messy Walls And Floors In Her Studio.
Friends: Her Friend From Art College, Magnum Opus, Helps Her Out With Business And Advanced Techniques
Rivals: ...But Paint And Magnum Are Both Very Competitive About Becoming Famous Artists Of Equestria. They're Still Best Friends Though So It's A Friendly Rivalry.
Reality (Generation): Generation 4