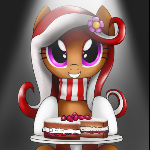 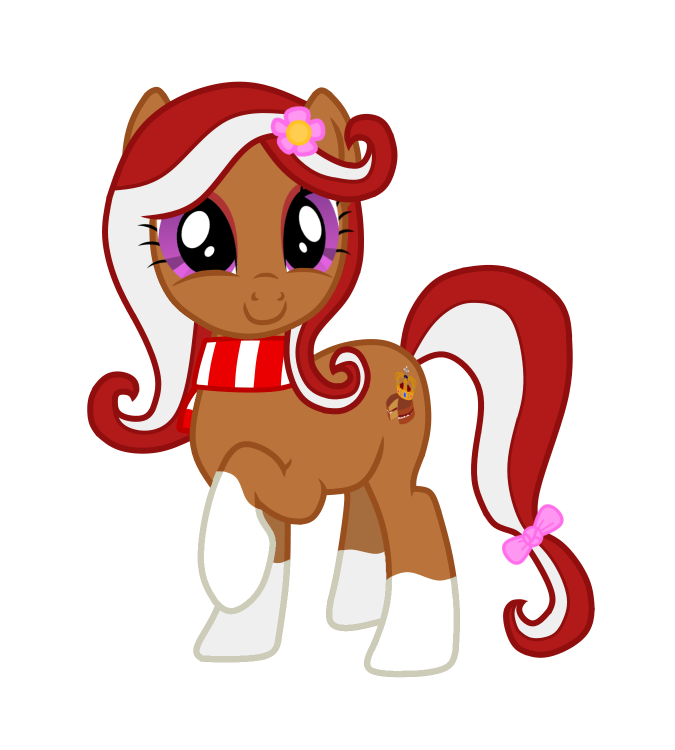 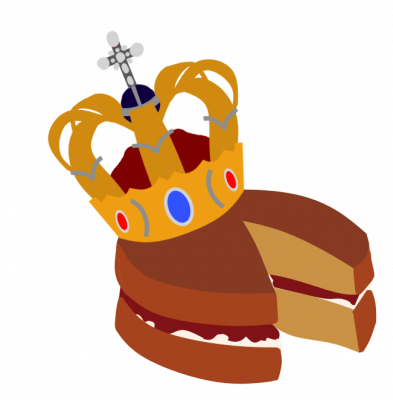 Victoria was born in Trottingham and grew up there with her mother, Lemon Drizzle, her aunt Raspberry Drizzle, her cousins Red, Heather and Caramel and her older sister Battenberg. Her father, Felix Carter, was present during the early years to help look after his daughters but in later years he continued to explore Equestria which meant he wasn't around very often. Despite this when he was around he played a lot with his daughters and eventually took them on some less dangerous adventures. Victoria loves her father very much and formed a much stronger bond with him than she did with her mother and even her sister, she looked up to him and shared his strength, determination and stubborn nature which drew him closer to her too. Unfortunately because Felix was not around so often Victoria often felt neglected by her mother who she lacked the same bond with which lead to her believing that Lemon loved Battenberg more than she did Victoria, something that couldn't be further from the truth, which caused her to lose most of her self-esteem and turned her into quite a nasty pony for most of her life. Despite this she still enjoyed baking with her family and the times that they baked became the only time Victoria would show any kind of affection for them, it was the only time they could truly bond. Through baking she found her special talent and got her cutie mark when she created a perfect Victoria sponge cake. Victoria and her family moved to Felix's hometown of Manehattan when the girls were old enough to not need their aunt anymore which meant they saw their father a little more often. It also meant Battenberg could start up her own business, Battenberg's bakeries. She made Victoria her co-worker in the Manehattan shop but Victoria wasn't always so reliable. Despite this Victoria has always worked for her sister for a decent wage and still does to this day, she is much better at showing up now though.

Victoria was often called upon to take care of her baby second cousin Angel Slice for her cousin Red Velvet, because she was very good at keeping him happy and making sure he got everything he needed. Through playing with the foal Victoria found she had a soft spot for the smaller ponies and began to want a foal of her own, her attitude has meant that she has remained single all her life however and she still worries this may never happen.

Victoria's attitude finally began to change when she met dragon/pony couple Benny and Circle Pop. While at first she did not get along with them she was forced by Battenberg to use her knowledge of Manehattan to show the couple how to find Dragon Town. While walking with them and with Battenberg's apprentice and close friend Cupcake Sprinkles she began to feel a sense of belonging and love for the newcomers. After an encounter with Benny's unpleasant mother Victoria finally snapped and had a serious breakdown. During this she finally let out all the feelings she had been suppressing with wave after wave of tears. Thanks to Benny's well timed cuddles she was able to admit that she knew she was nasty and that she didn't want to be anymore, as well as telling them of her wish to be a mother but how she was concerned she would be a bad one. During this breakdown she also admitted that she had never hated Sprinkles as much as she'd made out and the two of them became close friends. The situation was helped further when she bumped into her dad and had a cuddle with him too.

After the meltdown Victoria became a much nicer pony, willing to give out smiles and hugs and letting ponies get closer to her. She's still a little stubborn and standoffish and she can be quiet or rude when she encounters new people, but once she trusts someone enough to show her feelings she's a very warm, sweet and kind little pony. Her change in attitude also came with a new style for her mane and tail and is why she now wears her scarf. Said scarf was knitted for her by her mother, along with a yellow one for Battenberg, a purple one for herself and a blue one for Felix. Battenberg and Lemon can always be seen with their scarves but Felix, and until recently Victoria, did not wear theirs; Felix because he didn't want to lose or damage it on his adventures and Victoria because she was convinced that her mother didn't love her, this went so far she actually hid the scarf from herself and decided her mother had neglected to maker her one. The scarf now hangs proudly around her neck and she has vowed to almost never take it off again.

More recently she bumped into a food critic called Fine Gourmet, knocking him over and inviting him to shop for Hearth's Warming gifts with her to apologise. After spending the day together, and after lots of cake tasting both at her home and at the bakery, Victoria invited Gourmet to her family Hearth's Warming gathering. At the gathering the two bonded strongly and confessed their love for one another. She eventually married him after becoming pregnant with her twins Mascara and Strawberry Trifle. Victoria plans to move into an apartment with Fine Gourmet eventually and finally live without her family, though she knows she will miss them.

Victoria is an odd pony. She unfortunately lacks a decent sense of self-esteem and her inferiority complex helps to make her feel like she's worthless and in the shadow of her sister. This drove her to develop an attitude and to act like she had a superiority complex, just so other ponies wouldn't know how worthless she felt. This left her with few friends and a lot of enemies which only worsened the problem. Luckily in more recent times, though she still feels a little worthless and down on herself, she has managed to change her attitude to a more amiable one and has a fair few friends. This means she can be stubborn and snappy at times and sometimes doesn't like to show her emotions, but when she does open up she's a very sweet little mare and loves to giggle and cuddle everyone in the immediate vicinity.

Victoria has a heart of gold and is very sensitive and caring for other ponies once you find her soft spot, she especially likes foals and dreams of someday having one of her own. She doesn't like mess and can be a little snooty about this, mainly due to her old attitude, but she doesn't make too big of a fuss anymore like she used to. She loves to bake cakes and will gladly get messy when she's doing so despite her usual feelings.

She loves her family, especially her sister and her father, and her Siamese cat Bella. She enjoys shopping for nice clothes and accessories, baking cakes and doing makeup and hair for herself and her family members. And she hates mess and loud creatures. She enjoys cuddling with Fine Gourmet and he makes her feel a lot more confident and loveable.

Victoria prides herself on her appearance, she has a light brown coat with a red mane and tail which she bleaches half white to obtain the appearance of a jam and cream filled Victoria sponge cake.

She wears a lot of make up around her pretty purple eyes, thick mascara and eye shadow in her favourite colour of red.

Something more unique to her is the white fur around her hooves, giving her the appearance of wearing socks. She inherited this from her grandmother Cotton Bus, and is only the second pony in her family with these markings.

She formerly let her mane and tail flow long and slightly curved but due to a change in attitude she styled her mane a little more like her sister's, letting it surround one of her ears entirely and adding more curls, such as the one held in place round her ear with a flower. She normally ties her tail about three quarters of the way down with a little pink bow. She now also usually wears the red and white scarf knitted for her by her mother.

Her cutie mark consists of a simple Victoria sponge cake, her speciality, topped with a regal crown to represent her regal name and attitude. 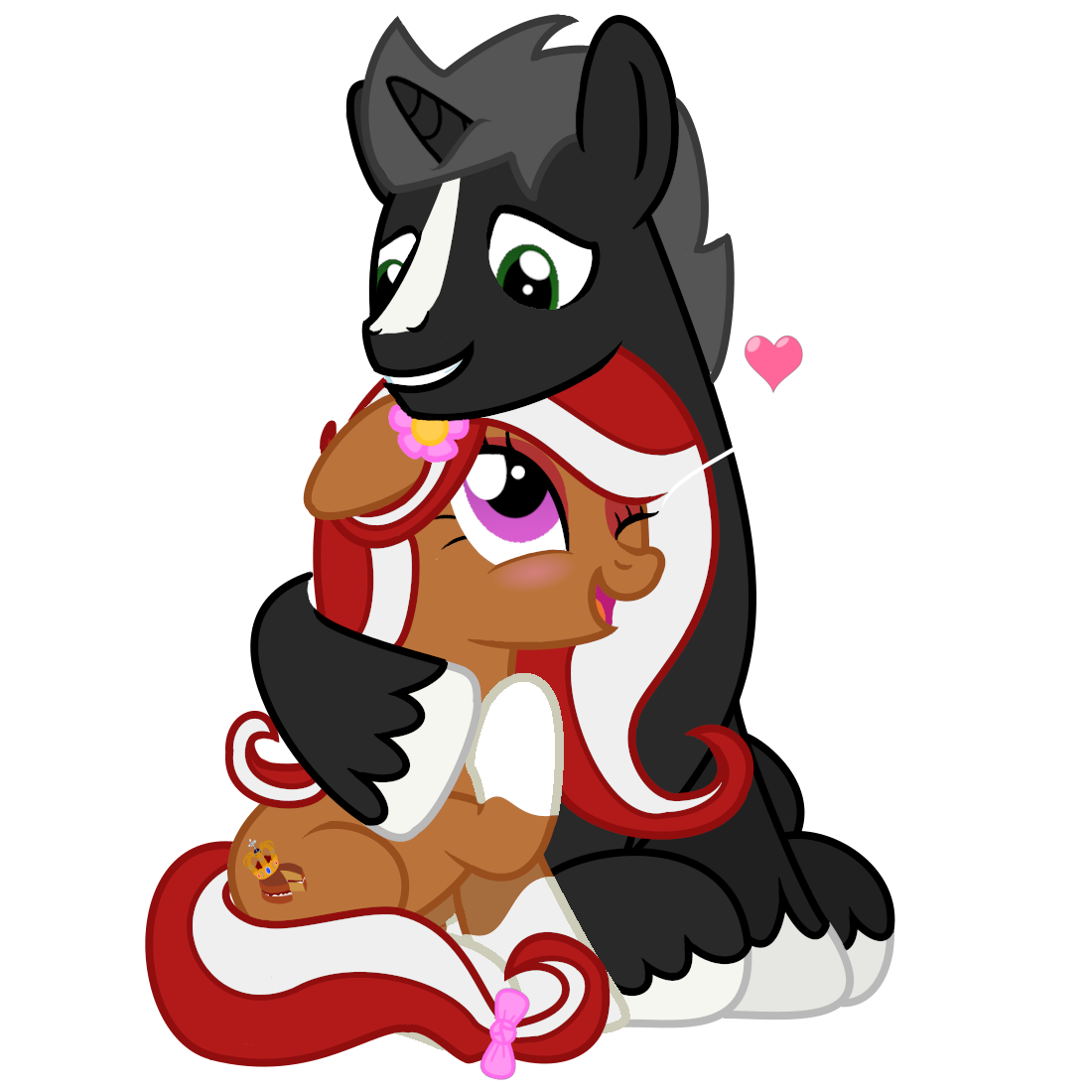 Confessing her love for Fine Gourmet on Hearth's Warming Eve