Princess Luna is taller than all other ponies, with the exception of Princess Celestia, her older sister. Luna’s eyes are deep cyan. Her coat is midnight blue. Her mane colbalt blue with shimmering specs that mimic the stars in the night sky. A violet, opaque outline accompanies both her tail and mane. It moves as if in a breeze, similar to her sisters She is always seen wearing her signature black crown and chest plate, as well as her silver shoes that shimmer like glass. On occasion, she does have a larger crown that she will wear, as long as a gold chest plate, however she only will wear them for the most formal occasions, such as a coronation.

Princess Luna’s cutie mark is a white crescent moon on a large dark area that covers most of her flank. It is sounded by five smaller dark patches. Her cutie mark was earned when she raised the moon for the very first time herself without the assistance of her older sister. 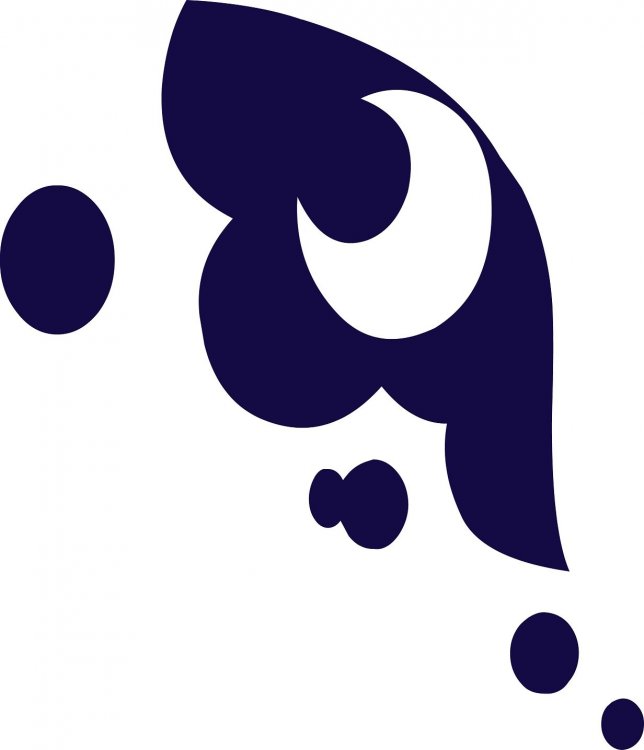 Luna tends to keep to herself much of the time, not going out for public appearances. Her transition back into pony society after 1,000 years has been difficult for her to an extent; coming to terms with many of the newer traditions and letting go of those that are no longer used such as the Royal Canterlot Voice. Princess Luna tends to use an archaic vocabulary when compared to her sister and many others. Since her return, Princess Luna slowly been learning the history of what has happened in Equestria since her exile, however she knows that if she has any questions, she can find comfort in her sister, as well as the newest princess, Twilight Sparkle.

In an attempt to better connect with her subjects, Princess Luna uses her ability to watch over dreams and nightmares, often helping them overcome their fears.

Though rare to be seen, Princess Luna has a potent temper. Flashes of lightning have been known to accompany her rare fits of rage as well as swirling storm clouds and booming voice.

Formal gathering, being reminded of her darkest moment when she became Nightmare Moon.

Little is known of Luna and her elder sister's early years. All that has been revealed are small snippets of her past through flashbacks and small references, such as their old castle in the Everfree Forest, as well as a dusty old journal from their youth.

During their battle with the Spirit of Chaos, Discord, the sisters retrieved the Elements of Harmony from the tree of harmony in order to defeat him, sealing him away in stone for over 1,000 years. Little did they know that the tree would eventually need them back to keep the Everfree Forest in check. After defeating Discord, Equestria rejoiced for its saviors. Luna and Celestia would rule Equestria as Equals. As a new threat emerged in the frozen north, the sisters ventured forth to defeat this evil, turning the tyrant King Sombra into shadow; however the as he faded away, so did his empire. It would be more than 1000 years before it would return.

As time passed, Luna and her sister saw less and less of each other as their duties kept them apart. With nopony to talk to at night, Luna became distant, staring off into the moon that she raised each night. Though she loved her sister very much, dark thoughts began to enter her head. The moon seemed to be her only friend at night, as an unknown evil slowly corrupted her loving and caring mind. She began to have nightmares as she slept during the day. They fed off of her insecurity as they began promising her more power and a way to make the ponies love her night. She thought that perhaps if night was the only thing the ponies of Equestria had, they would be forced to love it.

Luna’s jealousy began to grow with each passing day, with each nightmare that she had. She felt that she had been given the short end of the deal. The ponies of Equestria loved her sister's day, but shunned and were fearful of her beautiful night. She felt alone, almost as if the ponies fearing the night meant they feared her. One day, Luna, feeling quite depressed, waited up for her sister into the morning, however her sister was away on royal business. To Luna, this was the final straw. The darkness that had grown inside her snapped. When her sister returned, Luna confronted Celestia. She walked up to the podium that separated their thrones , destroying it in anger as her eyes glowed, proclaiming that there could only be one true princess in Equestria: her. It was at this moment that she gave into the darkness inside her.

of the tree of harmony once was revealing the afternoon sun. Luna flew up to the opening and raised the moon, causing an eclipse over Celestia’s precious sun. The resulting energy rays enveloped Luna in a ball of magic energy as it turned from red to black to blue. It was at this moment that Luna ceased to be; Nightmare Moon was now in control. As the ball of magic opened, the blue energy became the mare’s mane and armor now covered her darker body. The corrupted Luna laughed as power pulsed through her. A blast of energy shot from her horn, destroying the statue of her sister and part of the castle roof, revealing the moon. Celestia pleaded with Luna to lower it, however Luna quickly corrected her. She was no longer Luna but Nightmare Moon, and that her only duty was to destroy Celestia.

An epic battle ensued as Nightmare Moon chased down Celestia, blasting her out of the sky. Within moments, however Celestia returned with the Elements of Harmony, though their power was weakened due to their loss of connection to Luna, they still were enough to defeated Nightmare Moon, sending her to the moon in exile for 1,000 years... and Luna with her.

On the moon, Luna wrestled with the darkness that had transformed her into Nightmare Moon. Many times she wished that she could just take it all back and just be with her sister again; however the evil that had grown inside her only thought of revenge.

On the longest day of the thousandth year since the battle, Nightmare Moon broke free of her prison, returning during the Summer Sun Celebration. Nightmare Moon would once again face off against agents of the Elements of Harmony, though this time a new group of ponies bore them. Their strong connection purified Luna, dispelling the darkness and leaving the loving and caring Princess of the Night.

Though not one to go out much, Luna has on occasion made appearances outside of Canterlot. One Nightmare night, Luna ventured into Ponyville in hopes of improving her image to the villagers. Their reaction to her was one that she did not expect; they seemed afraid of her, something that made her sad and frustrated. She had hoped that they had put the memory of Nightmare Moon behind them as she had, but it appeared not to be the case. With the help of Twilight Sparkle and her friends, Luna was able to learn ways of fitting in, such as a normal speaking voice and how to 'double her fun'... however, many of the children still ran from her. When it was later discovered that they actually enjoyed being scared by her, she promised not to cancel Nightmare Night and swore to return to scare them next year.

Guilt would haunt the princess's own dreams upon her return to Equestria. Luna would create the Tantabus to remind her of dark mistake and ensure that she never forgot her darkest hour. As time passed her nightmares would become more powerful and this creature would escape into the dream realm. Princess Luna would have to learn to forgive herself, as others had of her to defeat the Tantabus.

Even after their reunion, it would not be long before Luna and Celestia began to drift apart once more. Twilight Sparkle would send her star pupil to Canterlot to solve a friendship problem. Much to both sisters' dismay, it was discovered to be the fracturing relationship between the two of them. Fearing the worst, Starlight Glimmer did the unthinkable - casting a spell to switch the sisters cutie marks for a full 24 hours. Saying Luna was angry would have been an understatement, however she would go along with the plan, only to prove Celestia wrong on who's job was hardest. In the end, all was worked out as Luna greeted her sister with pancakes.

Dream Walking-Princess Luna has the ability to enter ponies dreams as the sleep through the dream realm.

Transformation -The ability to change her appearance or that of objects through magic at will. One of her favorites is to make her cloak vanish by turning it into bats.

Weather Illusion- Princess Luna has the ability to minorly effect clouds and lightning in her immediate area, though this is often for show.