No Not Cast Young Adult

Refer to an image for CM/Appearance **

Eye colour: Her large eyes are of deep, midnight blue colour, similar to that of the depths of the ocean.

Mane/Tail colour & style: Risi's mane and tail are of egyptian blue colour with a carolina blue streak running through them. They are both long, well-kept and delicate. Mane's styled to cover a side of her face, hiding an eye behind some fancy bangs. The tail is relatively thin and elegant.

Physique: Star's appearance is quite specific and she stands out from average mares. Mare is exceptionally tall and slim, what is a direct effect of her active lifestyle. She takes great care of her appearance and enjoys looking prettily. (She resembles the scheme of Fleur de Lis. Explanation as for why is written below*.)

A yellow star leaving a curved, purple-white-pink trail behind.

Star strives for success no matter the circumstances. If she’s great in something, she seeks a way to improve even further. If she completely fails, she searches for another step to learn the basics. Although determined, she rarely is serious about life. Star still loves jokes, laughter and cheeriness. She’d rather tease somepony instead of getting angry at him/her. Star allows her emotions and instincts to guide her rather than logic or reasons. She takes what life gives and doesn’t regret doing so.

What Star doesn’t want to admit though, is that she’s a perfectionist. Connected with her born-in impatience, it creates an awful composition. For example, taking a perfect portrait photo with all those ponies who can’t understand her brilliant idea… unimaginable. Moreover, her hasty attitude (instincts/emotions) often create an obstacle in self-improvement. Most amusing ideas are not always the best ones, after all.

Brief story - Star was born in Manehattan, in moderately rich family. She remained an only foal for three years before her sister came to this world. Her father worked as an engineer, overseeing various construction sites, while mother was a licensed doctor with vast experience and education. Since both parents worked, she was foalsitted along with her sister through their first years of life. At long last, the time has come to attend school. In the very first weeks she gained more friends than one could count. Her never disappearing smile, cheerful attitude, above average height, attractive physique, positive personality and activity concerning various projects worked like a magnet. Three years later, when her sister joined the school, Star was already a father figure to her. As she grew older, parents suggested her moving to Canterlot in order to study in Princess Celestia's school for gifted Unicorns. The idea was quite tempting, but in end, she refused it. Star decided to dedicate herself to her most beloved hobby, portrait photography. Still, ironically, she found herself living in the Canterlot nevertheless. Because where else could you find more celebrities and targets for an ambitious photographer?

Cutie Mark story – Star herself always assumed her Cutie Mark would be related to her interest in photos or art. She couldn’t have been more wrong. She was one of those fillies who were obsessed about their cutie marks. Neither drawings nor paintings were able to force her unique symbol to appear. When she received her camera and discovered her talent connected with its usage she was certain it would appear back then. But those were only foal’s hopes. Yet, she didn’t cease her search. Star tried various different activities after that, although she never dropped photography. As time passed and she started running out of options, she came complaining, depressed and nearly in tears to her mother. In order to console the daughter, she brought the photos Star did and they both started reviewing them. Star’s mum kept showing one after another, noting how Risi’s improving in her work. After yet another, countless comment like that, Star became silent, realizing an important fact. Her mother was positively surprised when she noticed a Cutie Mark appearing on her daughter’s flank. In the very same moment, Star spoke: “It’s not about what I do, but who I am. I’ve tried everything already, but I have failed. But I succeeded in improving myself, and I’m not going to stop doing so. I’ll practice anything my Cutie Mark will force upon me to become better and better, and eventually maybe even the best!” Her happiness after noticing what’s her mother pointing at was indescribable.

Career – The signs of Risi’s upcoming career were visible fairly soon after her birth. As a young foal, she had shown most unusual interest in pictures and photos. Thankfully, parents noticed this and encouraged her by providing her with free access to family albums (under supervision, of course). When she had grown into a filly, Star tried her strengths in drawing and painting. Even though successful in making friends or learning, she couldn’t achieve results better than ‘average’ in art, but she kept trying. Everything changed during one birthday party. Her parents, aware of her interests, presented her with a camera. It soon turned out it was a perfect idea, because Star quickly realized she has got talent for snapping great shots. Instead of going studying to Canterlot, young mare decided to further develop her skills connected with photography. It paid off eventually, because she managed to organize a few exhibitions of her photographs, which were somewhat treated as an art. After earning some more professional experience, she moved to Canterlot with intentions of starting her own photo business. Thanks to her determination and wits she pushed herself into actually fulfilling that dream and breaking through the competition. She now offers a wide range of photographic services, connected not only with portraits of course.

Pet Companion - There's one stallion in Risi's life though... well, technically it's hard to call him a stallion. And practically as well. The main reason for that is because he's a Yellow-headed Caracara, a common bird coming from somewhere across the sea, most probably the land of Saddle Arabia, although Star never truly discovered this information. The Caracara was a present from her family, somepony to keep her company after she started her business. Imperio, as that's how the bird is called, is quite a contrast to Star herself. While she's always full of energy and careless, the Caracara is stoic and majestic. It adores observation, as it could spend whole hours sitting in one spot, looking like some kind of royalty on a throne and watching the surrounding or Risi at work. Yet, Imperio can also have its moments of activity, in which he'll shamelessly interact with different ponies as if they were Star herself. As for today, Imperio is invaluable in fighting the feeling of loneliness which accompanies Star when she reminds herself of her sister. Mare treats him as if he belonged to the family itself, and on the other hoof Imperio knows how to appreciate it. Least it looks like he does.

Since Risi did not study or take any particular interest in Unicorn's magic, she possess only the default spell setup that each Unicorn knows.

* - Word of explanation concerning physique pick: Application was written on an existing idea of various TV tropes, in which hero possesses possibilities, skills, appearance and charisma for becoming a famous (insert occupation here), but resigns out of it for the sake of his/hers own passion and hobbies. That's why I always describe Risi's voice as strong and melodic for example (not able to reach most pitches though of course), since I initially intended her for becoming a singer. Still, she is supposed to resign from the greatest possible amount of features in order to devote herself to her passion (a lot of wasted talents, features and beauty). 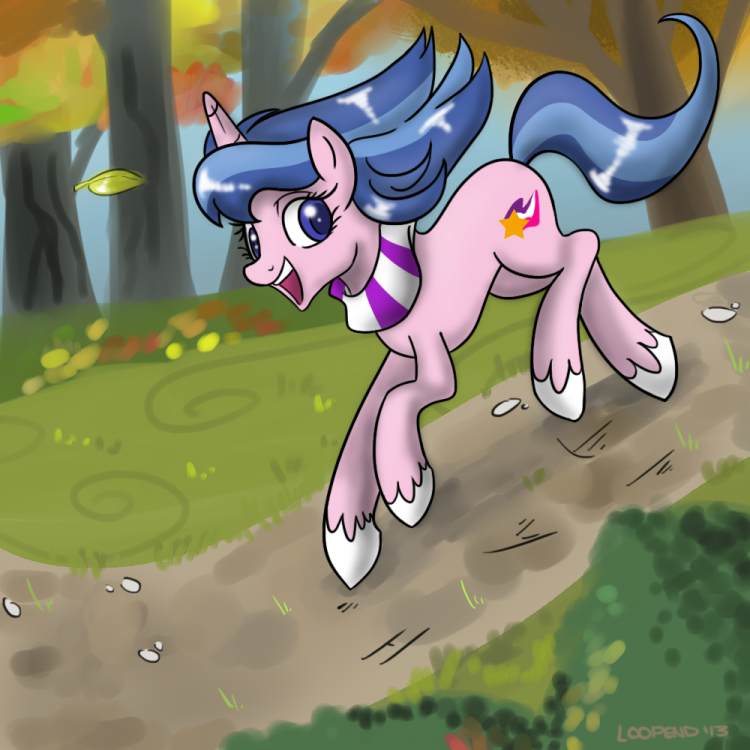 ** - the image itself is a request done for me by Loop End, for which I'm truly grateful.