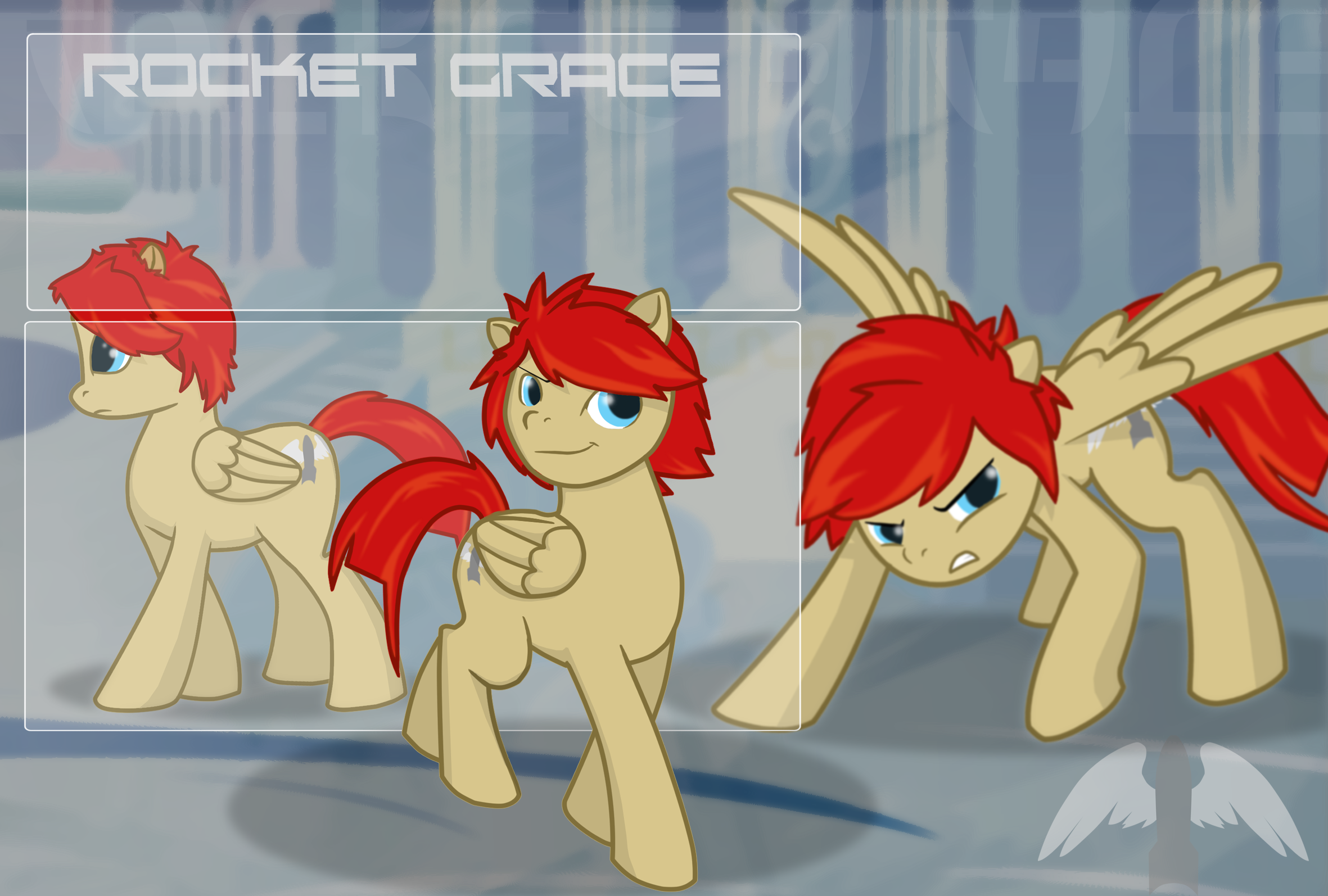 Personality: While she has proven that she is a good friend to a very select few, Rocket outwardly exhibits qualities of harshness. She seems unimpressed, rough and surly toward most - at least at first.

Backstory: A bit of a rowdy firebrand and, at times, a loose cannon, Rocket Grace is typically found to be rough, jagged, sarcastic, and bossy.<br />To friends who know her and have stood by her in spite of her notorious attitude, she isn’t everything she appears to be on the surface, however, most of her true compatriots will identify that these qualities seem to be the result of a defense mechanism, that she’s simply keeping everypony else at bay – though, for what reason remains uncertain, She simply exhibits some small hint of untrust. To most, this filly is standoffish and unfriendly, this is due entirely to the tough front she projects. While some very few would give her the benefit of a doubt, it could be argued that Rocket is just a genuinely unlikable pony.<br /><br />Some have joked at her personality as a direct reflection of her name, and that she is “With a Rocket’s Grace”, direct and quick in nature, often with devastating results.<br />Accompanying these qualities, Rocket is also known to be very loyal, caring and genuine, albeit quick and to the point and above all, a very straight shooter, so to speak. Though these qualities are more admirable in most cases, they are often overshadowed by her gruff outward nature and due to this, they go largely unnoticed. It has been agreed upon, however, that if she were to nurture these more positive qualities above others, she would be a natural choice for leadership.<br /><br />Rocket’s Idea of a good time is with her friends. During these times she seems happiest – and the most rambunctious, often sharing in loud laughter, and generally disruptive Merry-Making. She is definitely one for a good time, indulging with her group of comrades any time the occasion occurs. When left to herself, she can be found sitting quietly, lounging alone with her thoughts, and silent reflections. Often times she has been found to be exceptionally approachable and more relatable during these times of relaxation.<br /><br />When confronted, or when she feels someone has slighted her, she immediately sees herself as an unstoppable force, not to be challenged, and this school of thought is bolstered with a stubborn pride that often gets her into some conflict or another. Even so, she is rarely in over her head. She may be loud, brash and cocky, but more often than not, she can back herself up using a certain rough and tumble nature that matches her attitude and help from a Wing Power of an astonishing 19.0.<br /><br />With this mention, it stands as its own point that Rocket is a very fast flyer, she knows this and most who have seen fit to challenge this know it as well, but its not a thing she boasts about. She has always had a natural aptitude for speed and flight, even learning to fly at a very early age. She sees it as a gift, she enjoys it, and as such, believes that its not something to be bragged over. This thought that she maintains is in contrast to her typical outlook and attitude.<br />With this, she reserves herself as a speedster, but almost never goes around making boasts or challenges.<br />Rocket doesn’t speak much, if at all about her childhood, even to her friends. The very few who’ve heard anything of the filly’s home and family know little more than that she didn’t know her mother, and that her father, as she tells it, was a great parent, and a wonderful stallion. This is an ideal that she will, and has physically fought to maintain.