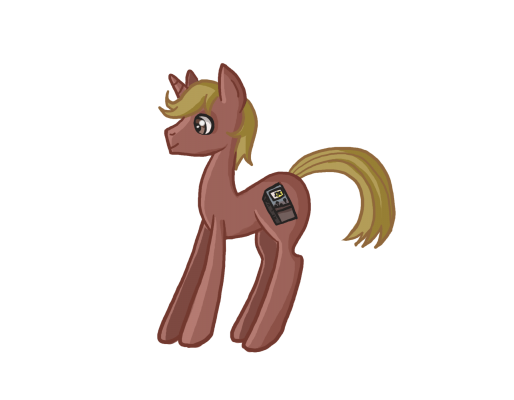 Cutie Mark: AP's cutie mark is an arcade machine, because his special talent is playing video games and works at an arcade as they are canon in Equestria.

Personality: Alert Player tends to keep to himself, but is willing to warm up and talk a lot around ponies he knows. He tends to be nice to most people and often silly, but is serious and dedicated when it comes to video games. He is afraid to talk to mares though, but he wishes to start a family someday.

Backstory: Alert Player was born and raised in Ponyville. He had a rough, lonely childhood and doesn't like to talk about it much. He would often rather spend time at the Ponyville Arcade playing games there rather than doing schoolwork at that age though, and on one fateful day when he beat the high scores on all the games there his cutie mark appeared! It was on that day he realized his special talent was playing video games, and after getting out of school he immediately went to work at the arcade and has been there since. He lives in a decent apartment in downtown Ponyville when he's not working at the outdoor arcade, and although a bit lonely he gets by. He also happens to have quite a large crush on one pony, a mysterious unicorn white mare with a wonderfully curled purple mane that he sometimes sees come to the arcade to pick up a filly with a swirly mane he sees there often. He hopes to one day go into the boutique where she lives that he 'happened to see her walk into one time' and ask her out, but with his timidness towards mares that might be difficult for him. One thing that AP likes to say a lot is 'Life is like a game, but with variable difficulty and a lot of boring parts.'