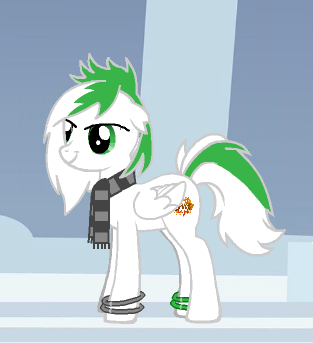 Cutie Mark: Cutie mark is a comic explanation of "bam!" he got it when helping with special effects during a school play as a young colt.

Personality: Is easy going, un excitable and generally lazy. He can be easily frustrated when somepony does a job better than him and iften uses his easy going and lazy nature as an excuse to not be out going.

Backstory: Was always a smart colt. A very smart colt. Groomed to be a heir to his fathers business and succeed in every way except that wasnt what HE wanted so... What happened was slightly different. He was set to go to a very exclusive and highly praised business school and the morning he was to board the train hus parents found his room empty. A note sat on his bed with one sentence. "Gone to live with sister. Sorry." he moved in with his sister Pop art in Baltimare and works at The White Griffon Tavern and Grill as a bartender while helping the town plays and small time b movies with thier special effects in his spare time.