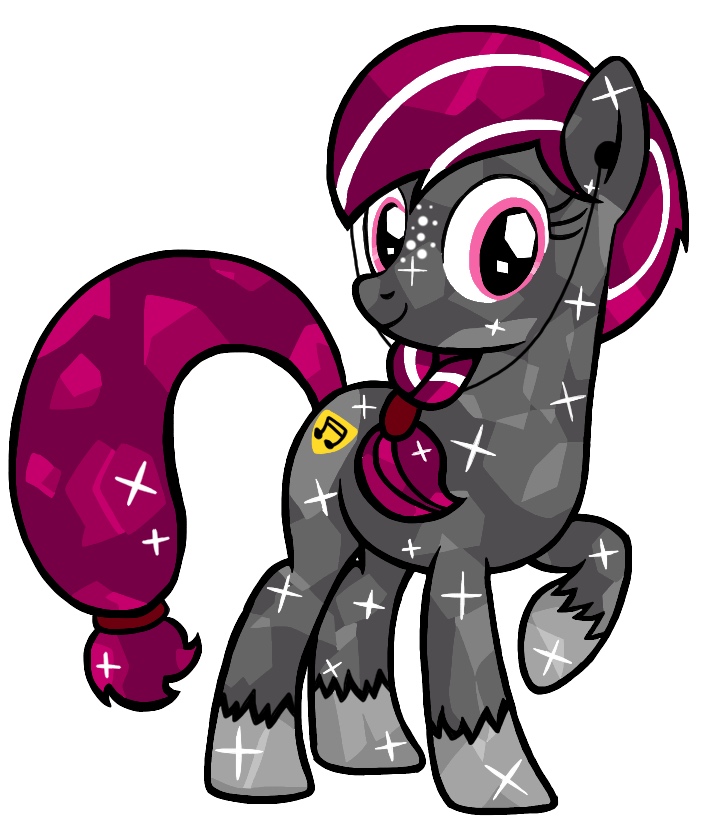 Appearance: Like most Crystal Ponies, Crystal has a shining coat and features, which are dark coloured in nature Crystal's coat is Dark Grey and her mane and tail are dark purple with white highlights.

Cutie Mark: A golden shield on its foreground is a beamed semiquaver.

Personality: Crystal Note is a keen learner and is always looking for things to expand her horizons. Even after being confined within the Crystal Empire a millennium ago, she is still always seeking new knowledge. Crystal is socially centered; she loves to converse and mingle. Being so acclimated to a gathering of others, she doesn't do too well on her own and has been known to experience mood swings when her lack of interaction starts to bother her.<br /><br />She is a musician by nature and profession despite her second job, and therefore loves all things music but prefers techno, and electronic music, this is only a preference she loves all music she also has a rather good singing voice. Crystal dislikes the upper class and the rulers of Equestria and can't forgive them for not saving the Empire 1000 years ago, and distrusts unicorns dure to Sombra likes magic though finds it wonderful. Despite her social behavior can and will mess it up with bad jokes or puns she loves puns. <br /><br />Likes: Music, ponies, magic, technology, reading, singing, socialising, messing around.<br /><br />Dislikes: Upper class, unicorns, bad singing, loneliness, herself sometimes, non-law abiding creatures, cleaning.

Backstory: Crystal Note was born to Ruby Note and Bass Clef and lived in the Crystal Empire that had existed before Sombra's enslavement and the kingdom's disappearance. As a foal, she was ever-hungry for knowledge, and showed a natural affinity for music. With time, Crystal learned how to play many different instruments, such as the guitar, the violin, the saxophone and many others; she also had quite a talented voice, and could sing beautifully. She played with many different bands, orchestras and choirs throughout the Empire... until the day Sombra took over. During these times, the poor mare saw the enslavement of her people, the ravages of being worked mercilessly, and the loss of her parents; she would never be quite the same after that experience.<br /><br />Crystal Note like the rest of the Crystal ponies has no memory of what occurred during the thousand year pause for the Empire. Once the Empire returned sought to return to her previous life which she did for some time, until the urge to explore took her again and with that set off around Equestria to seek new things in the thousand years of advancement for the rest of Equestria, one fateful day when Crystal was in Manehatten she passes a music store and decided to look inside to her wonderment she discovered techno and electronica music and has since fallen in love with that music types. Crystal has since then turned to learning the in's and out's of that style of music she now actively creates new pieces that she uploads to the ponynet.<br /><br />Another fateful day Crystal was playing around with various music pitches she blew the windows out of her home, she saw the applications that it could be used by the EUP she went to the barracks while the guards laughed at her she again blew the windows out of the building. Crystal is now employed part time to continue to work on making sound into a weapon she developed a 'sound rifle' she named it 'Bass Judgment' her own test model is capable to kill a target at one hundred paces, the weapon is far from complete, and malfunctions all the time.<br /><br />Crystal moves around the country and still visits home in the Empire time to time but most of the time plays, not only her turn table but sings and plays her more classical instruments.<br />