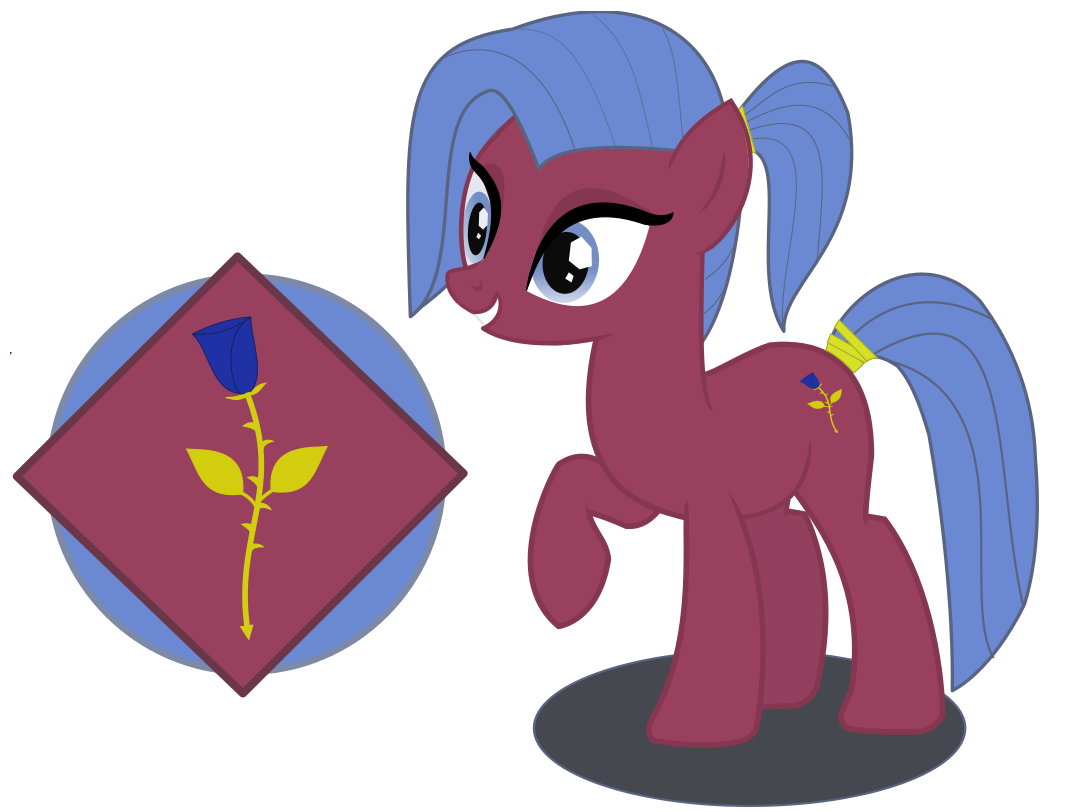 Appearance: <p> Crystal Clear is a crystal pony mare of average height and lean statue, slightly wider at the hips. She sports a cherry coat and azure mane, styled in a long, pointy frindge reaching past her snout, swept to the side so it won't block her vision, and a ponytail cut just above her shoulderblades, tied with some gold ribbon. Her long, straight tail reaches to her ankles, again tied with the same decorative ribon at it's base. Her eyes, again blue, are akin to sapphire - deep and alive, yet somewhat cold at the same time. </p>

Cutie Mark: <p> A golden chisel, albeit resembling a rose. It has a narrow point at one end, a few thorns and leaves in the middle of the slightly curved "branch" and a blue crystal rose on the other end. Crystal got her mark on one of the Crystal Fairs, when she got persuaded by her parents to try her hoof in a laid back competition for best crystal craft for young schoolponies. It doesn't represent her awesome skills at working crystal, but rather her attitude towards the job - she's precise like a chisel and striving to make her products visually appealing, while at the same time she's her harshest critic. </p>

Personality: <p> Upon first impression, Crystal Clear appears as a well-organized, fairly intelligent mare with sharp wit, who likes to trot on her own. She’s helpful, usually acts very nice towards friend and stranger alike, but she doesn’t really get this whole “community” thing, meaning she’s not a type of pony who invites you for dinner or goes on the openings of new venues around town. Introverted and task oriented, she’d much rather spend a day in her workshop chipping away at some new project than go out and meet new ponies. Which is kind of good, since she runs a crystal mending workshop on her own and has to pay the bills from her work, but at the same time, she has few friends. This is fine by her, because of her introverted and private nature. On the upside, her social skills are adequate and well polished, so she doesn't have any problems with dealing with ponies. Interestingly, she has a "just business" attitude towards others, meaning that she's unlikely to start a conversation about family and such with ponies she doesn't already consider friends, or tries to befriend on her own accord. Unsurprisingly, she has no idea whether her neighbour has siblings or not and so on. </p> <p> So, she’s nearly thirty, lives alone and runs a crystal mending workshop, alone… Is she secretly misanthropic and likes to sit in her apartment, pet a black cat and plot everypony’s painful demise? Not really – she doesn’t have a cat, for starters, although the plotting part is open for debate. Back in school few ponies were safe from her snarky wit. Nowadays she’s more restrained, although a careful observer may spot a death stare or two, and she can be brutally honest and abrasive at times, even if she doesn't like this side of her personality. </p> <p> Likes: </p> <p> - her work, quite obviously, </p> <p> - tinkering and problem solving, </p> <p> - clean and orderly spaces, </p> <p> - reading adventure novels while seated in her armchair and sipping her favourite brandy, </p> <p> - daydreaming, </p> <p> - wandering through the wild regions around the Crystal Kingdom. She call them "adventures", </p> <p> - polished pyrite cubes (don't ask), </p> <p> - Dark humor, sarcasm (a guilty pleasure since she thinks acting like that is wrong), </p> <p> - clasical music. She even bought a gramophone and some vinyls, and they're the only Equestrian goods in her home. </p> <p> Dislikes: </p> <p> - mess, </p> <p> - pushy Equestrian salesponies selling "wonders of modern technology", </p> <p> - answering the question "are you a crystal pony?", </p> <p> - when ponies ask her about King Sombra and his rule, </p> <p> - hot weather, </p> <p> - her brother Snowflake, </p> <p> - cooking. </p>

Backstory: <p> Born and raised in Crystal Empire before it's disappearance, thousand years ago. She eagerly recalls her childhood, seeing it as a simpler and happy time in a bygone age (quite literally). Or at least the time when she hadn’t had to pay the bills herself. She reached adulthood right before King Sombra came to power, and she absolutely hates it when anypony brings up the topic of those dark times. Unsurprisingly, she’s quite content under the rule of Crystal Princess Cadance and Prince Shining Armor, even if the world around her moved a thousand years forward... </p> <p> Crystal Clear has a brother, Snowflake, although she rarely talks about him. He’s two years younger than her. If she does tell something more about him, it becomes quite apparent that she doesn’t think very highly of him, but, as already mentioned, her sibling is not a topic to discuss all evening. Even though she’s not very intimate with ponies, she keeps in touch with her parents (Mom, Lurel Wreath and dad, Fire Ruby) and frequently visits them. She often helps around the general goods store they run or brings something special she made for sale or decoration. And of course she buys things from them (everything aside from booze). They’re pretty close, as far as her standards go at least. </p> <p> After the re-emergence of the Crystal Empire and restoration of its power, she took residence in a small house on the city outskirts, where she set her Crystal Mending workshop. It’s a two story building made entirely of blue crystal, with white decorative motifs. The ground floor contains the workshop and tiny office, while the upper floor serves as her apartment. There’s a basement too, but it's used as storage space - mostly for raw crystals she bought cheap, some preserved food and the like. Somewhere in the house there's also a secret stash of her favourite crystal berry brandy, "Sweet Dreams", but so far, despite quite a few attemts by her family, it's location remains unknown. </p> <p> Since the huge success of Equestrian Games hosted in the Empire, crystal became very fashionable, and so she frequently receives queries for her services from outside the Empire (as all mending shops do now). If the offer is interesting, well paid, or both, she will eagerly take it, since it gives her shop extra renown, bits, and in case of big orders, like the recently finished collumnade in one of Manehattan Banks, an opportunity to see modern Equestria. </p>