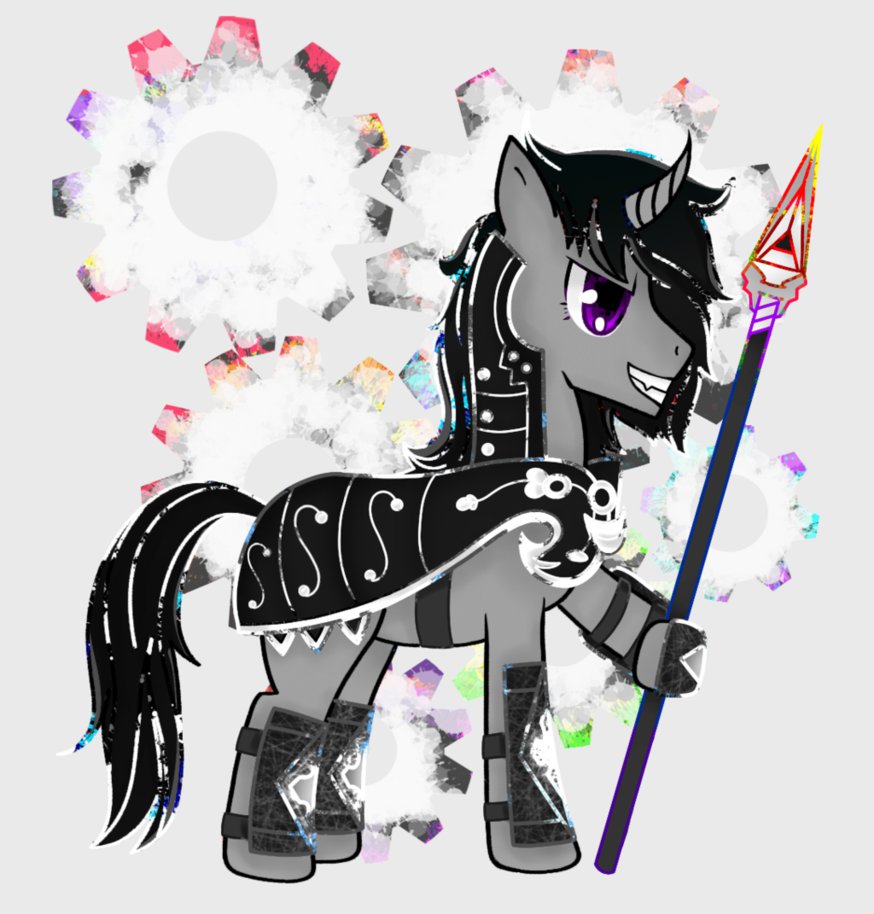 Appearance: He also wears black crystal armour, and carries a black crystal tipped spear, when he gets mad or annoyed his eyes can take a deep crimson red color. His magic color is a dull dark grey

Cutie Mark: A black Crystal with 3 cogs. Representing his talent for creating things out of seemingly nothing and his dark personality. He is deeply connected with his armour and he crafted it himself.

Personality: He is usually somewhat mysterious and ill tempered, he is very direct and logical, and deeply despises anypony who makes fun of his hooked horn and would quickly lash out, but that depends on if he is having a good day or not. <br /><br />Crystal Cog does have a soft spot and leniency for mares, as they are innocent and rather adorable in his view. But he keeps those thoughts to himself, it takes a while for him to trust somepony.<br /><br />Once he learns to trust somepony, he is loyal and protective as can be.

Backstory: He grew up in a small mining town in western Equestria. He was bullied by other foals in school and he frequently lashed out at them and always got into fights with the bullies, but he was rather helpless.<br /><br />That all ended when he found a black crystal in a cave one day, that is when he had gotten his cutie mark. The following schoolday when he walked into school and when the bullies bullied him he sealed them in crystal for an entire day but then freed them. They were forgiven.<br /><br />At that point he ran away from the town, word was getting out about what he did and he stood no chance against the higher authorities. He would casually stroll into libraries at night and learn all he could about magic so he could protect himself. <br /><br />