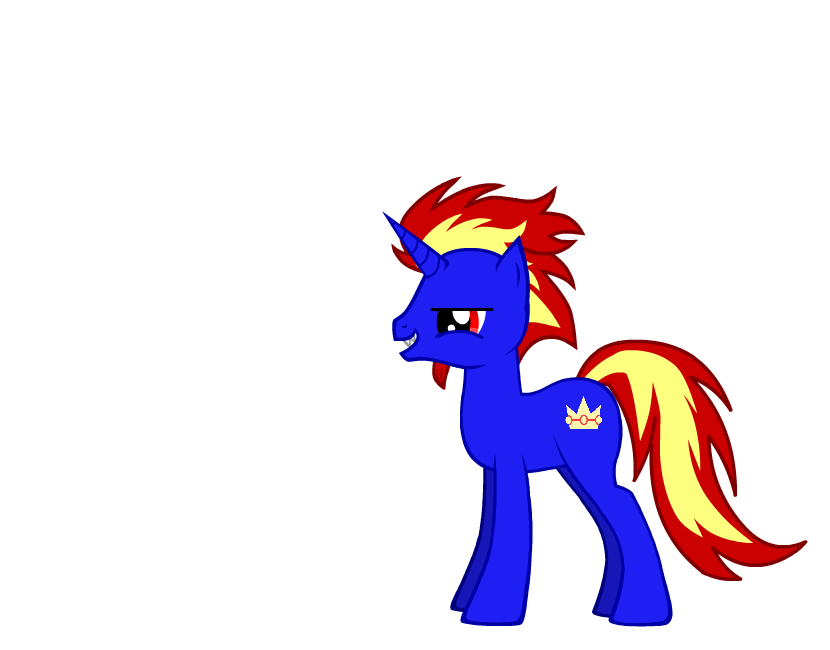 Appearance: He is a somewhat tall with a blue pony with flame colored mane and tail.

Personality: Defiant Shadow is a recluse. He will not leave his castle unless required to. Most of his duties are done by orderlies. His public image is a happy fluffy blue pony on posters and propaganda that is posted throughout the empire. The only time that he will meet anypony in pony is other nation leaders.<br /><br />His reclusiveness also leads to a high level of paranoia. Shadow believes anypony that has an inkling of revolt, he sends in his changling secret police to take care of the problem. His paranoia also leads to the almost constant surveillance of anypony in the empire, ponies from other lands especially.<br /><br />Ponies that do actually meet Shadow will find he is very prideful in his magical abilities. He boasts that his abilities are greater than anypony around.

Backstory: Defiant Shadow grew up with his father in the capital, Stalliongrad. Shadow's father was the ruler of Sovneigh Union since he ascended the leadership by assassinating the monarchy. Shadow's childhood was spent in the castle learning about how to rule with an iron hoof from his father, and the select revolutionaries that supported his father. During a training session with a common pony in his court, Shadow put the pony to death for a very negligible crime of stealing some food. That was the day he earned his cutie mark, and from then on, his father began to allow him to take over some court duties. <br /><br />His schooling also involved a lot of dark magic teachings from the resident unicorn. The unicorn taught him all the magic he knows, but his pride and joy spell would be his mind control. Shadow can take control of any weak willed pony or creature and control them like it was an extension of himself.<br /><br />One day while attending court with his father, a tragedy occurs. A pony rushed from the outside and kills his father right in front of his face. The pony was apprehended before he could kill Shadow, but this scars him for life. The court is immediately shut down to the public, and Shadow retreated into the bowels of his castle. There he manages the empire through orderlies. He later had his generals take over a nearby changling kingdom and employed them as his own loyal secret police. Shadow maintains their loyalty by allowing them free reign over his subjects for food.