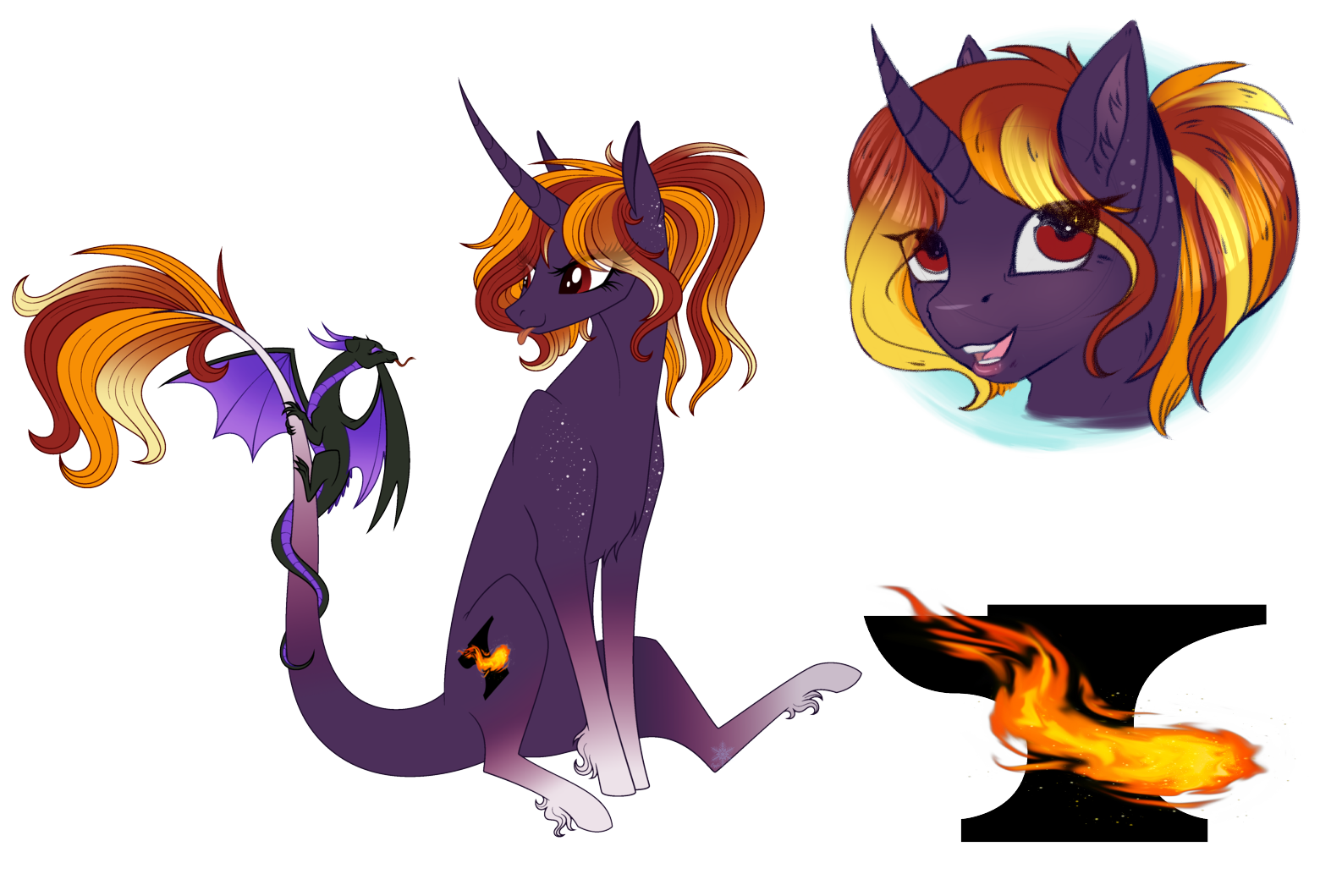 Appearance: <p> A majority purple kirin/unicorn. Her grandfather was a dragon passing some dragon traits. (both phyiscal and mentally)<br /><br /> Apart from her Purple coat, she has white socks on her legs.<br /> A long dragon like tail.<br /> Curved horn.<br /> Crimson and yellow/orange mane and tail. </p>

Personality: <p> Ember is a rather typical 'tom boy' she likes being with the boys and doing rather male-ish work , hence her profession as a blacksmith.<br /><br /> Ember has always thought that she was most likely meant to be born a stallion but nature just forgot about her body, however she is quite happy to be female and has no issues with any sort of gender issues.<br /><br /> Ember can do rather more 'girly' things at times without too much objection but doing to much can put her off.<br /><br /> Ember is out spoken, loud and not afraid to speak her mind. She's socially awkward when it comes to intimacy (like most of us). She's rather fierce when defending friends and family or loved one(s), she is also a more dominate personality.<br /><br /> Likes: socializing, being lazy, working, practicing magic, watching tv (if applicable), reading, doing silly things with her tail, tickling and being tickled.<br /><br /> Dislikes: too much 'girly' things, wearing female clothing, being tickled too much, arguing, changelings, upper class. </p>

Backstory: <p> Ember has always been a Canterlot mare, she's never really ventured from the capital except when going on holiday and the like so really has very little knowledge outside of the capital.<br /><br /> Ember was born from a union of a kirin and a unicorn She took most of the traits of her unicorn father and less so from her kirin mother, but despite this has a few phyiscal and mental traits from her, she exhibits quite a few dragon traits when it comes to socializing and more embarrassingly certain mating habits which has caused a few embarrassing situations.<br /><br /> She grew up with a passion for magic in her young age, she was always pestering both her father and teachers and any adult unicorn (that she knew) to give her more lessons learning all she could. She was unfortunately not very good, but it didn't curve her desire to learn. However... she was rather talented a fire magic, a lessor magics but nonetheless she was very adapt at making fire, especially in making very hot fire, hot enough to assist in melting mettle.<br /><br /> She earned her mark when rather bored and in a fowl mood one day, she blasted her fire magic in frustration at a set of knives her parents owned when she was home alone. She realized what she did too late and almost screamed in panic at what she did. But instead of merely getting in trouble like most she took the molten slag of what was the knives and shoved them in the families fire place she grabbed a hammer from their shed and over the course of the day reforged the entire set from what remained hammering them back into a stunning set of knives simply using the bricks from the fire place to reforge the set.<br /><br /> When her parents came home Ember admitted to her crime, they as expected were rather unhappy and were close to grounding her for at least a month until her father used the one of the knives on a water melon, it sliced so easily that he stopped her mother from grounding the filly. They were so both impressed by her skill they used the entire set to make their favorite family meal, basil pasta...<br /><br /> And her mark appeared on her flank. Soon after she became a blacksmiths apprentice. She worked with her new master until becoming a fully fledged blacksmith, since then she owns her own forge and makes all sorts of metal creations from tools, weapons and amour for the royal guard to sets of knives for willing customers and everything in between. </p>