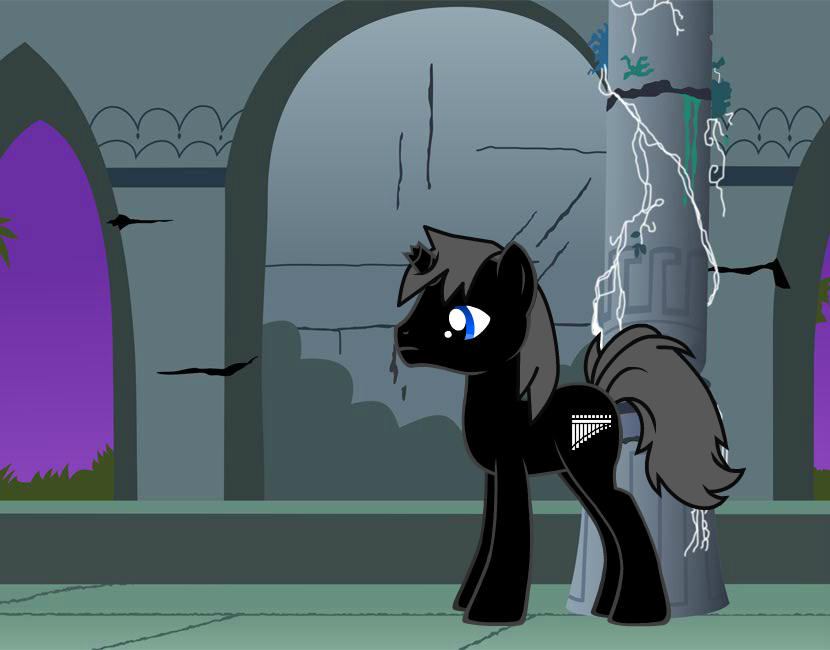 Appearance: Hope’s look is inspired by an Andravida breed of equine. He has Charcoal fur, his mane and tail is dark silver, he has eyes as blue as the sky. Part of his horn appears to have been snapped off, his tail is rather raggedy as well. He usually carries a sorrowful, reserved look.

Cutie Mark: A Pan flute, symbolizing nature, sentimentality and in a way, mourning. He got it after he played a melody from his own pan flute that discouraged a group of attacking griffons a young age.

Personality: Hope is reserved and only opens himself up to very few who happen to earn his trust. He is clever and has a way of using words to his advantage. Although, Hope can be brash as well, he feels the most comfortable when incognito, but he doesn't have that luxury often. He does not like to speak of his past as he has yet to come to terms with it.

Backstory: Hope was born in Aeria, an artificial flying city built by unicorns who wanted to be even with the pegasi. His father, Alver, was the captain of the guard; while his mother, Kyra, was a shopkeeper.<br /><br />In those years, he was known by a different name - Amyntas. As the colt grew, he lived a fairly normal life...or about as normal as life on an airborne city could be.<br /><br />But one notable event was when he was only an adolescent, a griffon vanguard attacked; they had their eyes on Aeria for a while now. As many guards and soldiers - including Amyntas' father - were being overwhelmed, the young colt managed, by sheer determination alone, to come face-to-face with the griffon commander of the attacking group. In single combat, the colt stood little chance and was swiftly kicked to the side by the more experienced griffon who continued towards the decreasing numbers of the Aerian ponies. It was then that an unexplained feeling awoke within Amyntas. In a mix of solace and desperation, he pulled his pan pipes from his saddlebag, put them up to his lips and began to play. <br /><br />The colt summoned from his being a melody that many would describe as so moving that it miraculously stopped the Griffons in their tracks, calming them. Yet they would equally describe it becoming as frightening as any war cry, encouraging the vanguard to retreat; sparing the surviving guards and many others which earned him the respect of most of the city. Not long after Amyntas received his talent mark - or 'Sigil' as the Aerians liked to call it.<br /><br />But his life really took a turn for the worst when he reached adult hood. Aeria's former leaders were replaced by some far more tyrannical. A few young ponies, including Amyntas had hatched a plan to deal with them: Remove the crown and assassinate them in their sleep. Amyntas was the sole stallion to do this.<br /><br />He carried out the plan smoothly, successfully infiltrating the Aerian palace and after much hesitation, did away with the tyrants as well as remove the crown afterwards, however the futility of the situation dawned on him.<br /><br />You see, when a unicorn becomes leader of Aeria, they unleash magic powerful enough to keep the city airborne, restoring energy that beings to wane when the previous leader dies, and it doesn't take long to dissipate fully.<br /><br />So - with nobody to restore the energy - Aeria would fall down to Equestria, many didn't survive the first hour, Amyntas immediately took shelter in a cupboard that was in a safe spot as Aeria broke apart in its fall. When it made impact, Amyntas was knocked out.<br /><br />When he awoke, Amyntas found the wreckage of the once proud city scattered on Equestrian soil and here and there, were the remains of those who didn't survive, including his parents, friends and many more that he never knew.<br /><br />As the next days passed, the stallion slowly made his way to Fillydelphia, there he ran into a mare by the name of Orange Swirl, she told Amyntas of Ponyville and how he could find someone there to help him with his dilemma…and his mood. Then, the pegasus mare asked the stallion his name, Amyntas hesitated, then as he looked into Orange Swirl's eyes, he felt a feeling he hadn't felt in a long time and replied "Hope. My name is Hope."<br />