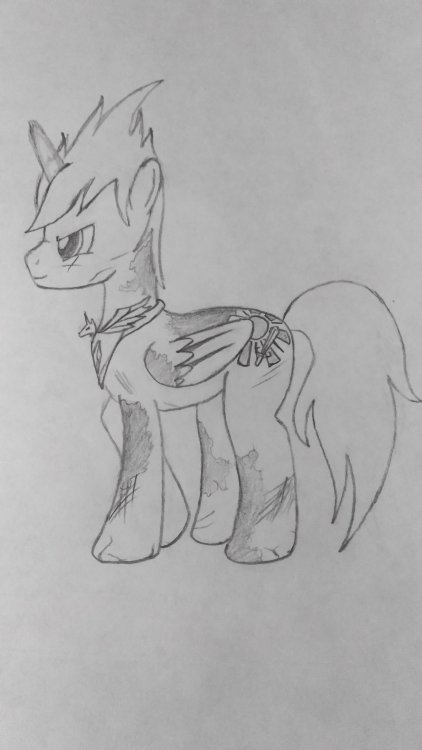 Appearance: <p> Pre Corruption: He was a regular pegasus guard, nothing special except his colors, his colors used to be like Sunset Shimmer, his mane style was like a male Sunset, his coat was a light grey. </p> <p> After corruption and Banishment: He is a pegasus, his coat is a light orange and his mane looks like it is made out of fire, his eyes are red. He wears the Alicorn Amulet. He has horrible burn marks, scratches and cuts all over him and on his hooves there is cracks in his skin filled with dried blood. He has a translucent horn but is NOT an alicorn </p>

Cutie Mark: <p> Pre Corruption: A whitish swirl with a blue 6 pointed star in the center (Don't know meaning yet) </p> <p> After Corruption and Banishment: A brilliant sun with a sword, representing this fierce personality and eagerness to fight </p>

Personality: <p> He is very egotistical and boastful, much like Trixie but does not perform stage magic in any way. He tends to get angry very quickly, and has immense pride. Keeneye can also be destructive when angered, and he despises being disrespected in even the slightest sort.  </p> <p> <span style="color:#272a34;">He yells, shouts and screams all the time, and not pleasant to be around, perhaps there is a chance he can be reformed....</span> </p>

Backstory: <p style="color:#272a34;"> He comes from another universe, as he was banished into the sun by Nightmare Star. He became possessed by the Alicorn Amulet, or something like there of in the universe. </p> <p style="color:#272a34;"> When he was on the sun, he was in unbelievable amounts of pain and suffering,about 10-15 whole years to be exact, when he managed to get free, his body was scorched, his flesh was burnt, charred to a crisp, and he attempted to heal himself, with somewhat of a good result, he still has burn marks and stuff all over. </p>