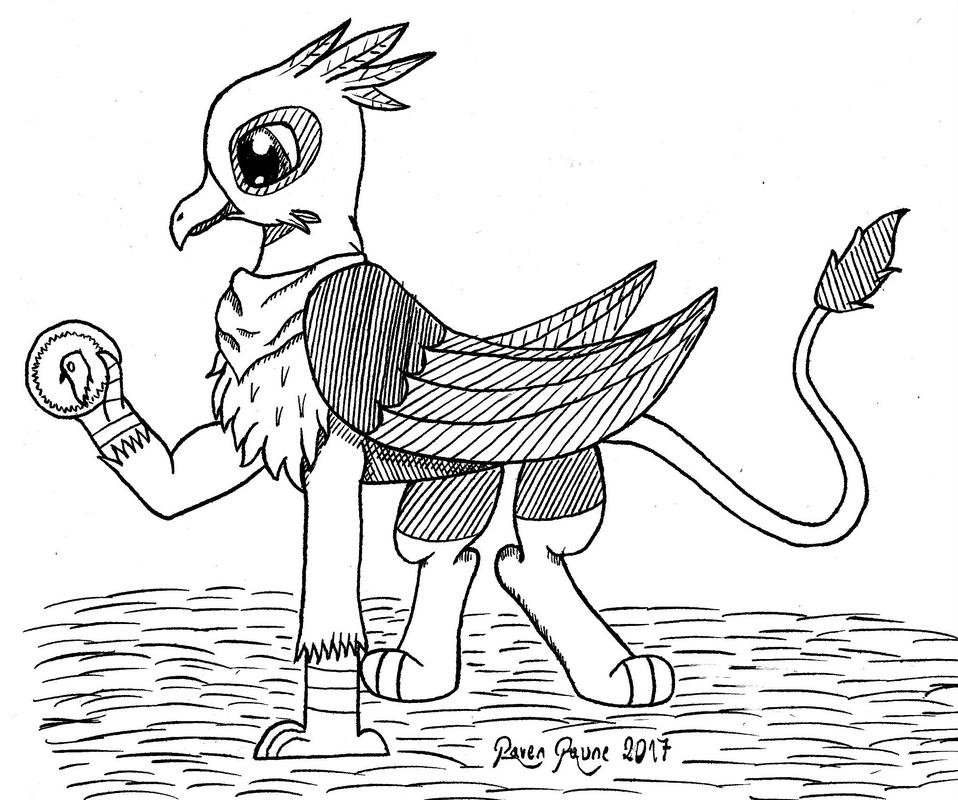 Personality: <p> He is not trusting, and often decieves, but does not try to harm others unless they are hostile to him. He hates Pegasi, as he believes that Griffons own the airspace that Pegasi fly in. He does not make many friends, but he does ally with ponies when he knows they can help him. He can sometimes laugh at jokes that are not very funny, or side with the ponies that are not the kindest, but only because he always is out for personal gain. He is very defensive of his views, and criticism of him can cause his anger to flare up. He also hates it when ponies insult his “profession” of stealing precious artifacts and other valuables.  </p>

Backstory: <p> He was born by a mother who was swamped in debt and she died in childbirth. He was placed in an orphanage, or as he calls it “the hellhole” and he was cared for. He was utterly misbehaving and chaotic in his time there. As soon as he turned 13, he ran away, and there was a large search sent out to locate him. He, however, had flown all the way from his orphanage in Manehattan to Griffonstone by himself so that he could perhaps meet more of his own kind. When he arrived, he was met with cold, unforgiving stares and glances of hatred. He spent many a night on the street curb or under a bridge, cold and shivering and with nothing to eat. Then, he discovered a group of runaways just like him. He gradually earned the respect of the gang, stealing bread, pie, medicine, and other things that they needed. He discovered that he had a natural talent for stealth and thievery. Eventually, he became the leader of the gang. Then, he got the idea of robbing more things than just food or petty thievery. So he started to steal from places like banks and museums. Every time a new exhibition showed or a cash deposit was made, he snuck in and swiped some or all of the valuable materials. His thievery made the front pages of the newspaper almost daily, and he started to feel very proud of himself. One day, a friend of his told him that the newest exhibit was coming to the museum. It was a showing of the Orb of the King, a fabled solid crystal orb that adorned the center top of the griffon King’s scepter in the days of yore (The orb is shown in his picture). Luminio began to make plans to steal it. He conducted a large operation that involved the whole gang and was the most elaborate plan he had ever concocted. Precisely at midnight, he started the heist. Griffons flew onto the museum gables, using sharp knives and wires to cut thin holes in the glass. The theif griffons then slipped through the holes and alighted on the carved statues in the museum. Luminio slid in last, and he was about the grab the Orb when he heard something. Suddenly, he shouted “RUN!” at the top of his voice and snatched the Orb. He and the other griffons flew up to the holes in the glass and started to climb through. Just as the last griffon slipped his disc back into place, a museum guard calmly entered the room. He walked around before noticing that the orb had dissapeared. He sounded an alarm, and guards ran through the city, trying to find the perpetrators. Luminio, being smart, sold it quickly and profitably on the black market, getting it quickly out of his possession. After that, the gang robbed a bank, again barely getting out. They made a huge profit from it and bought a large house. While everyone else was getting settled in, Luminio told the others that he needed to steal one last thing. The handkerchief of his mother, which was magical (powers shown in the “other” section) was in the possession of a very greedy pony who coveted magical items. Luminio snuck into the house of the pony and stole the handkerchief and put it on, swearing to forever wear it.  </p>