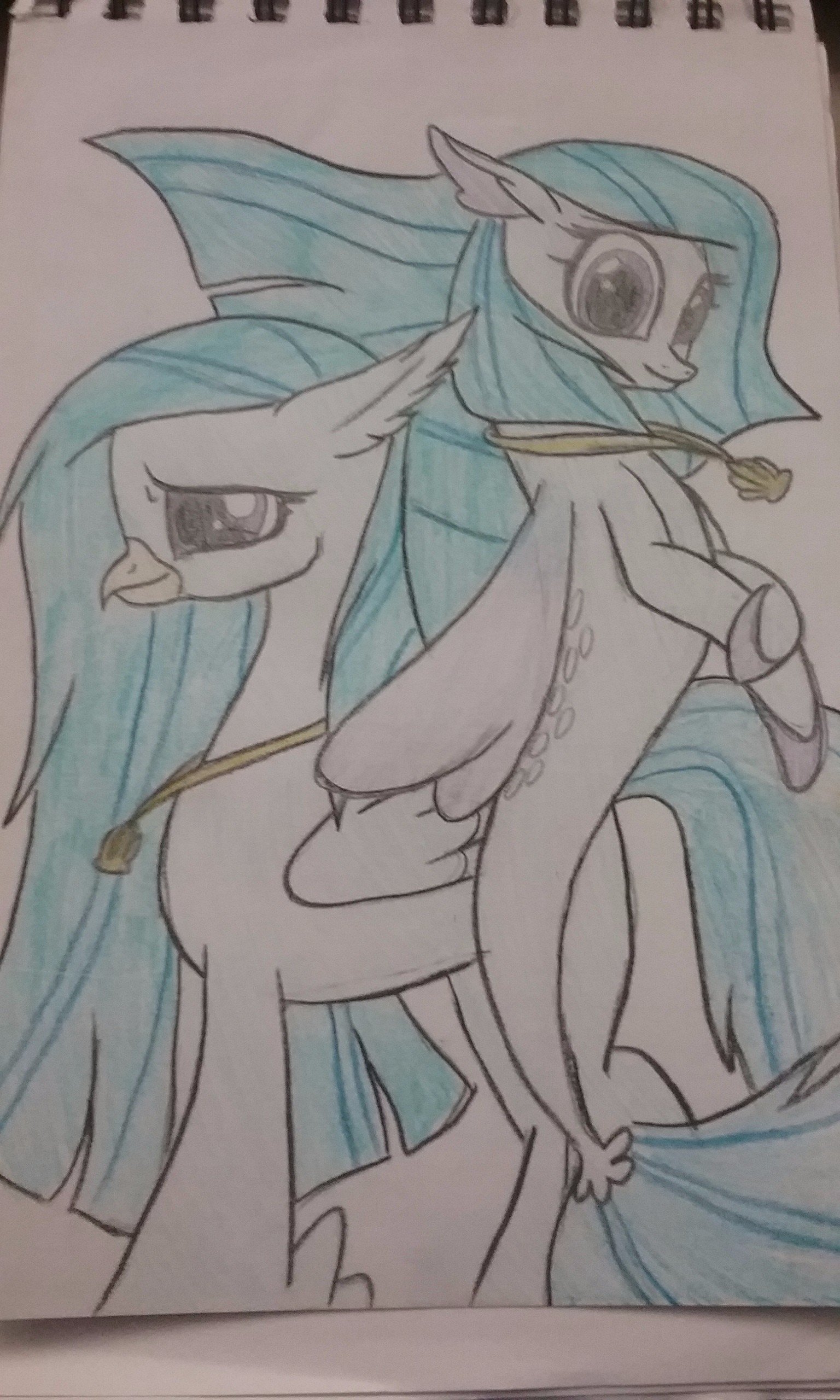 Appearance: <p> Serenity is a Hippogryff. She has pale baby blue fur, with pale violet tips to her wings and ears. Her hooves and claws are violet, and her mane and tail are aquamarine blue with dark blue stripes. Serenity's mane and tail are poker straight and fall to her knees and hocks. Her eyes are violet. Her necklace is a small diamond shaped shard set in a gold locket shaped like a sea shell on a gold chain. She is in height taller than a pony, but not as tall as Princess Skystar. She has a slim build from living on her nerves. </p>

Personality: <p> Serenity is shy and introverted from the years of living by herself. She can be impulsive and rarely thinks before she acts. She does not adapt well to changes and tends to get sick if she has to live with a major lifestyle change, such as the Hippogriffs turning into seaponies. She would come off to others as being abrupt and unfriendly, when in reality she's desperate for friends, but just doesn't really know how to make them. </p>

Backstory: <p> After the Storm King attacked the mountain, Queen Novo decided to move the whole race underwater, changing them with the pearl, an artifact which could change bodies, and which turned the Hippogriffs into Seaponies. But Serenity couldn't settle underwater. She missed the outside world, she missed galloping over the hills and flying thru the air. Serenity begged Queen Novo to turn her back, but the Queen refused at first, due to the danger outside. Eventually, after Serenity seemed to be fading away with sorrow under the sea, Queen Novo compromised. She gave Serenity a sliver of the pearl made into a necklace; this would give her the ability to change her form if she needed to. However, in return for this gift, Serenity had to leave the Hippogriff country altogether as the city was unihabitable and she would be in danger if she stayed. Serenity did not wish to leave her family and friends, but the pull of the outside was too strong to resist, so she agreed to the terms and left the Hippogryff country, taking on the form of a pegasus. She eventually ended up in Equestria but didn't feel that she fitted in to pony society; tho she could change herself into a pony, she could not act like one, so Serenity eventually settled down to live in the Everfree Forest. </p> <p> During the Storm King's invasion of Equestria, Serenity hid in the forest, changing her shape to avoid detection. Once he was defeated, she was relieved, but still felt unable to mix with the ponies. She sometimes visits the pony towns, but doesn't stay for long. </p>