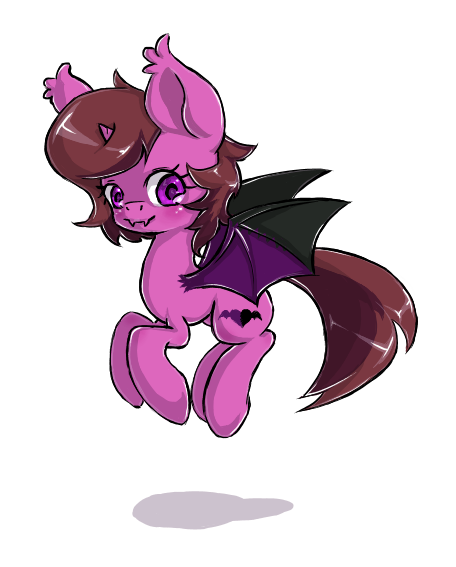 Cutie Mark: Heart with bat wings-means she helps people good and bad and helps them with any of their problems with love and compassion

Personality: Serious but joy full,goofy,cute,loves to learn new things ,drawing,hanging with friends,and looking at the night sky,loves her kingdom, and loves animals, she has a bad temper but it doesn't get set of easily, loves scary things

Backstory: Here is a song by blue brony that he made me for my OCs story:http://download2028.mediafire.com/hblgn9z6i0vg/4cwz4r26naim86x/Vampira+Heart+Final.mp3<br />Vampira Heart<br />Vampria Heart comes from a very large and royal family in the vampire kingdom as a filly she spent most of her time alone her dad was always gone fighting a war or gone doing business with other kingdoms to prevent war so Vampira spent all her time in her room drawing ,sewing,playing with her two pets heartsly and Hamilton,looking in the mirror where she can see her dark side exploring the castle her mom left her alone and was always gone running the kingdom and too busy with her royal duties to be around Vampira, Vampira didn't have any friends when she was young the closest things she had too friends was Her pets and her dolls and her drawings till one day when a war broke out in the kingdom her parents were gone all the time and she was alone and scared at the time she was ready to give up and give into the darkness letting vamipira dark take over and she went mad killing fighting and she joined the war till it ended but then the war was over but she was still blood thirsty and visious she was saved by a boy named Shynight who noticed her about to leave to attack the folks of ponyvile and helped her heart go back to good he was her knight in shining armor and they quickly fell in love and lived together in her castle when her parents moved away to retire from their duties and she now rans her kingdom and watches over her batpony citizens