Jump to content
New Here? Check Out This FAQ/Information!

Greetings from the middle of winter! <3 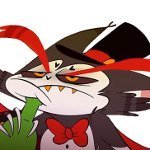