Opinions on the "Volumes" and Ominibuses? 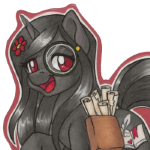