Background Ponies in the Spotlight? 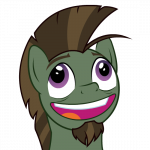