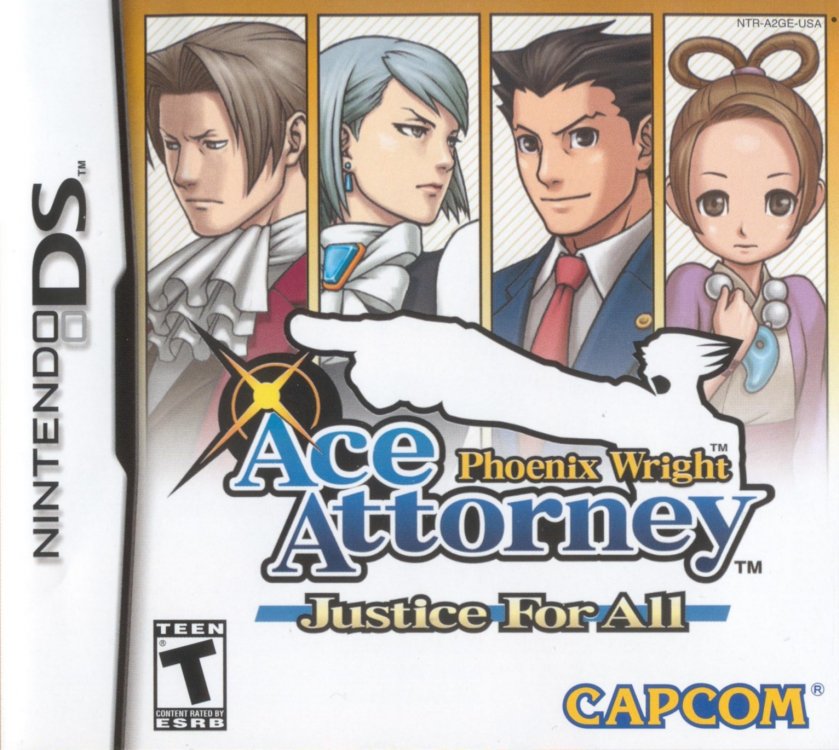 Quickly after the success of the first Ace Attorney game, Capcom quickly followed it up with Ace Attorney: Justice For All. After establishing an interesting world and cast of characters in the first game, everyone was excited to see what they could do with the second game. However, with the bar set high on the first one, will the second game be able to meet those expectations?

Also much like the first Ace Attorney, Justice For All is a remake of the second game on the GBA, and was the first time the game was released in the US. And again, there may be spoilers, though mostly from the first game 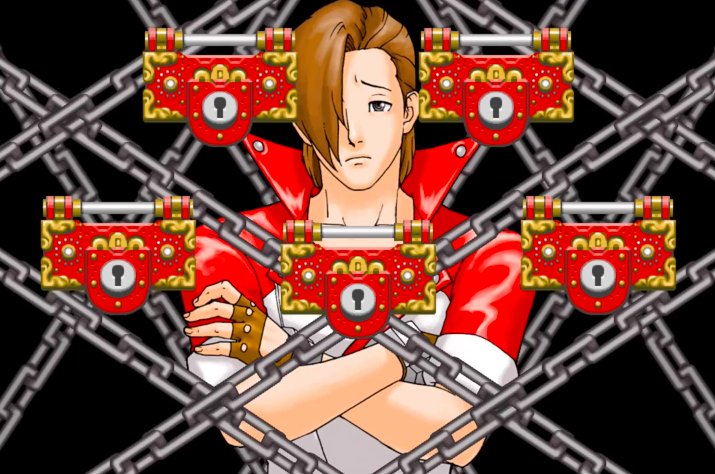 The gameplay is mostly unchanged from the first game, with two key differences. One is that unlike the first game, this one had no new cases added, so it doesn't use any of the new gameplay additions from "Rise from the Ashes" and Apollo Justice. However, one new addition it does comes with is the addition of Psyche Locks, which helps make the investigation sections a little more interesting. Maya gives Phoenix an item called a "Magatama" and with it Phoenix can use it to uncover deep secrets from different witnesses throughout the game, and will help you in the trial. Many witnesses have several locks, and some are harder to unlock than others and may require more evidence than others, and using the wrong evidence will deplete your "penalty bar". Speaking of which, the Penalty Bar(which is basically your life bar) replaces the Penalty points from the last game, and it's much better. Instead of losing points, you "health" whenever you make a mistake, but one thing that separates this from the penalty points is that the amount of "health" you lose depends on what you screw up, and some penalties hurt more than others, and unlike the points, your "health" doesn't recover after the trial, and breaking psyche locks will recover "health"

The game takes place a year after the first game, and most from the first game comes back as well as several more new characters. The most notable characters include Pearl Fey and Morgan Fey, Maya's cousin and Aunt respectively, as well as Franziska Von Karma, the daughter of the first game's villain, Manfed Von Karma, and serves as the game's main prosecutor after Miles Edgeworth disappears, and is probably my favorite character in the game(and is totally my waifu). Most of the main cast from the last game including Mia and Gumshoe, and a few minor characters like Will Powers(awesome), Lotta Hart(ughhhhh....) and Wendy Oldbag(...UGHHHHH). Unfortunately Larry doesn't return for this one(though I'm sure some people may not have a problem with that :/). Most of the new cast is, admittedly, a step down from the first game, though most of them are stuck to one case, and there are still many memorable characters that are some of the series best, like Maggey Byrde and Adrian Andrews.

One interesting thing the game does an interesting job with the story though is how it makes you care very little for most of your clients(with the exception of Maggey Byrde) and the murder victims, as a few of them turn out to either be dicks to straight up scumbags. Inversely, it does a good job of making you feel really sorry for a few of the criminals.

As for the cases themselves, it's a mixed bag. The first case(The Lost Turnabout) involves Phoenix is to defend officer Maggey Byrde, a clumsy but cute officer(and one Gumshoe has an obvious interest in) who is charged with murdering her boyfriend, the case serves as a tutorial case, but it's handled in a really dumb way as Phoenix is struck in the head and suffers from amnesia during most of the trial until the end. It sucks. The second trial(Reunion and Turnabout) revolves around Phoenix reuniting with Maya(who left in the end of the first game) while bringing a client to get a spirit channeling to right a wrong. However the client ends up killed and Maya is once again framed. This one is really interesting as it brings us a closer look to the mystique surrounding Maya's culture and abilities, and introduces several key characters. The third case is the infamous "Turnabout Big Top", which where you must defend the famous magician and "Master of Flying", the fabulous Max Galactica, who is accused of murdering the ringmaster of the Big Berry Circus. This case is easy the worst in the game, if not the entire series, I can understand why this case is so unpopular with fans. Positives I will say is that enjoyed some of Max's antics, and the the murderer reveal was a huge heavy hitter, but despite the fact that the case is circus themed, the rest of the characters introduced here are some of the most pain in the ass witnesses I have dealt with in the series, they're all incredibly annoying, really difficult to deal with and are absolutely no fun at all. The final case(My Farewell, Turnabout) on the other hand, is the highlight of the game and is right up there with the final cases in the first and third game as the one of the best cases in the series. It involves Phoenix having to defend the star of the hit new "Nickel Samurai" series, Matt Engarde, who pretty dorky and airheaded in a why(though there is more to him than he lets on), meanwhile Maya is kidnapped by an assassin and will not release her until Phoenix meets his demands. This game definitely lives up to the game's subtitle "Justice For All" with all the events leaving you at the edge of your seat and having one of the best plot twists in the series, but for me, what makes this one special is how it's one of the most realistic cases in the series.

Again, mostly unchanged from the first game. Most of the areas are well-detailed and the sprites are as over the top and as expressive as ever.

Sound design is, again the same. The music however, while still great, is a step down from the first game. On their own, the music still adds to the game's atmosphere very well, but key songs like Phoenix's "Objection 2002" and the "Cornered" aren't as pumping as the first game's. On the other hand, the Great Revival themes for Miles and Franziska are easily some of the series best as well as Matt Engarde's theme and

Admittedly, the game is my least favorite in the original trilogy, but it's still fun to play and a must for fans(flaws and all), especially for the final case alone. Much like the first game, if you have a 3DS the Ace Attorney Trilogy is the way to go