*blows away dust* Whoa, I guess it's been a while since I've done of these... Anyways, hey everypony, Woohoo here with another Musical Manslaughter, because you can't spell 'slaughter' without 'laughter' and these songs are jokes.

Now I know it's been a long time since done one of these. It's mostly because I haven't found any songs that really make me angry.

Then December arrived... and you know what means?

Yep, it's that time of the year. For the most part, I like the holiday season... except for one thing, the music. The incessant overplaying of the same dozen-some songs and like 100 different versions of 'em in almost every public place, which drives me up a wall. While there are a few Christmas songs that I enjoy, there are some that I absolutely despise. For this entry, I'm going to tear into two of my most hated Christmas songs, one classical and one modern. Let's break it down.

This is a random version of 12DOC I picked. Not hatin' on Bing Crosby

All my life, I've never really understood this song and why it's so popular. I just don't know why. Alright, enough of my rambling, let's break it down. Since I don't want to waste too much of your time, I'm just gonna type the lyrics from the 12th day.

On the twelfth day of Christmas

My true love gave to me

And a partridge in a pear tree

*inhales deeply* Where do I begin? Guess I'll start from day one ... and I will portray myself as a disgruntled boyfriend.

1. A Partridge in a Pear Tree: What the hell is this? All I wanted for Christmas was an iPhone and you give me a bird and a tree that require me to take care of? What's wrong with you?! I starting to question my love for you...

2. Two Turtle Doves: What? Now I have three birds to take of?! What's wrong with you?! You could've gotten me two turtles and I wouldn't complain, but no, you went for the birds again.

3. Three French Hens: At least these birds are edible but now that's six birds, SIX BIRDS I never wanted! That's it, I'm breaking up with you!

4. Four Calling Birds: That's ten birds now!! I need to file a restraining order against you.

5. Five Golden Rings: Wow, a gift that's not aviary related, although I'll probably just sell the rings so I can buy bird food. Maybe you're not so crazy after all...

6. Six Geese a-Laying: AW COME ON! Back to the birds again!?!?! Now I have sixteen birds squawking and shitting all over my house! And they are fucking too? What mental asylum did you break out of?

7. Seven Swans a-Swimming: Twenty... three... birds... and swans are assholes! Enough is ENOUGH! I have had it with these motherfucking birds in my motherfucking house! Seriously, which asylum?!

8. Eight Maids a-Milking: You finally stopped giving me birds, but now you're giving me people?! Also, what are they milking? Did they bring their own cows, too?! So now I have 23 birds, 8 cows (possibly), and 8 people.

9: Nine Ladies Dancing: Wait, where are you getting these people from? Unless... you're a human trafficker! I'm reporting you to the FBI!

10. Ten Lords a-Leaping: You mean like Sith Lords on a trampoline? Have you seen those guys? They don't look like the leaping type...

11. Eleven Pipers Piping: As if the birds squawking wasn't enough, now I have 11 more people playing the most obnoxious instrument in the universe!

*inhales sharply... again* So let's go over all the gifts I've received.

...And most of these things don't even relate to Christmas, especially the birds. Don't they fly south for winter? All I wanted was an iPhone and you give me all this shit. If your true love gives any of these things to you for Christmas, then he/she is an animal hoarding, human trafficking, noise polluting psychopath. My advice, break up with them, report them to the FBI, an have them committed to an insane asylum.

As for my thoughts on the song, let me show you in .gif form...

For my whole life, I never understood this song. This is not only one of the most nonsensical Christmas songs ever, but one of the most nonsensical songs ever! I know the 12 days represent the days between the birth of Jesus and the arrival of the Three Kings, but what do all those gifts mean? It's even more cryptic than "American Pie," which I already reviewed earlier this year. Whoever wrote this song must have been wasted on a few jugs of moonshine. It's also so damn repetitive. Hearing the same lyrics over and over is so tiring that I'm already bored by day four. Now for the final score... 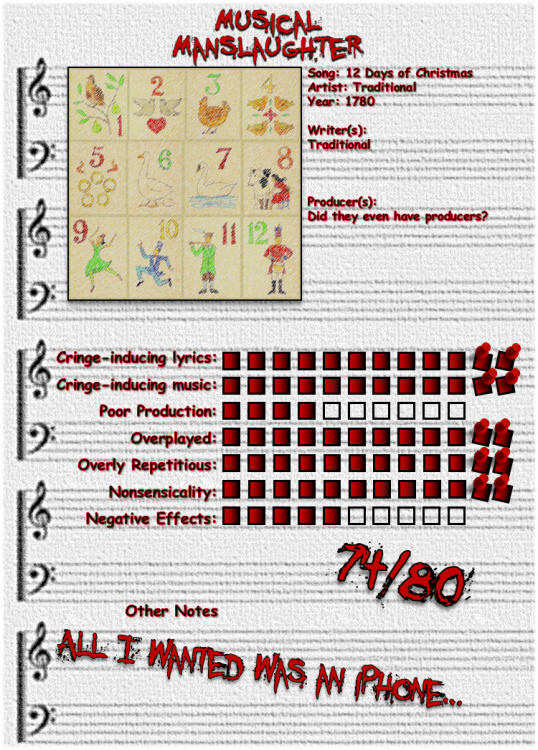 But I'm done yet. I have one more Christmas song to tear into...

The final Christmas song I'm tearing into is from the wonderfully non-dystopian year of 1984, and that song is "Last Christmas" by Wham.

This will be a doozy for me... let's break it down.

Last Christmas, I gave you my heart

But the very next day, you gave it away

This year, to save me from tears

I'll give it to someone special

Really? That's how you want to open your song? With that lame-ass chorus. Like I said in a previous MMS, I'm not a fan of songs that start with the chorus. *sigh* Where do I begin with this...

That's enough on the chorus, onto the verses...

Once bitten and twice shy
I keep my distance but you still catch my eye
Tell me, baby, do you recognize me?
Well, it's been a year, it doesn't surprise me
(Merry Christmas!) I wrapped it up and sent it
With a note saying, "I love you, " I meant it
Now, I know what a fool I've been
But if you kissed me now
I know you'd fool me again

A crowded room, friends with tired eyes
I'm hiding from you, and your soul of ice
My god, I thought you were someone to rely on
Me? I guess I was a shoulder to cry on

A face on a lover with a fire in his heart
A man under cover but you tore me apart
Now, I've found a real love you'll never fool me again

You know, a thought just occurred to me. The more I listen to this song, the more I wonder: How is this even a Christmas song? There's nothing really Christmassy about this song other than a few uses of the word "Christmas" and the use of sleigh bells in the beat. To me, this song just feels like a lame breakup pop song you'd hear on the radio pretty much any time of the year. This is my unpopular opinion but I don't really consider "Last Christmas" to be a true Christmas song. It just doesn't have the Christmassy feeling that other Christmas songs have... at least the songs I like.

Out of all the Christmas songs I hate, "Last Christmas" was the song I dreaded hearing the most. I can't stand hearing the original version by Wham or any damn version for this song. Even if an artist I liked covered it, I'd still hate it. In fact, there was a year in my life where I didn't want to celebrate Christmas because it would mean I would be hearing this song a bazillion times again. Yeah, those were dark times for me. So, do I still hate this song? Well, what do you think?!

Now for the final score. Just a few points lower than "Twelve Days" but still bad. 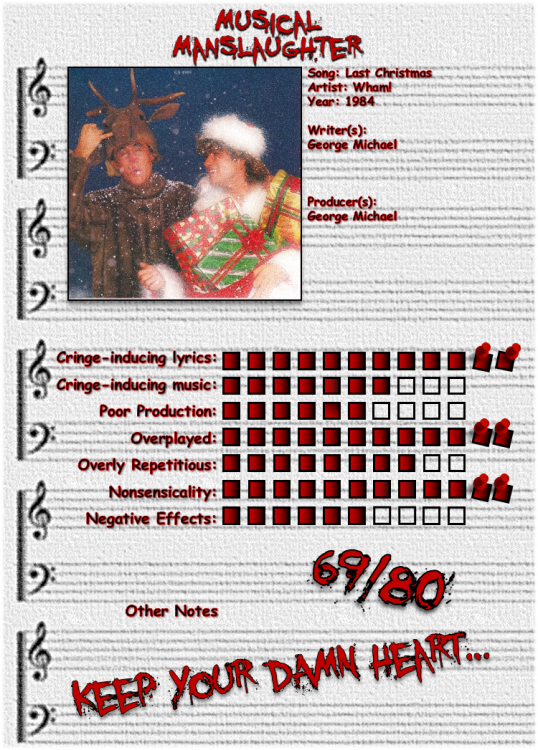 And that concludes this entry of Musical Manslaughter. If you like these songs, that's fine. Hope you all have a Merry Christmas. Maybe next year, I'll get that iPhone... 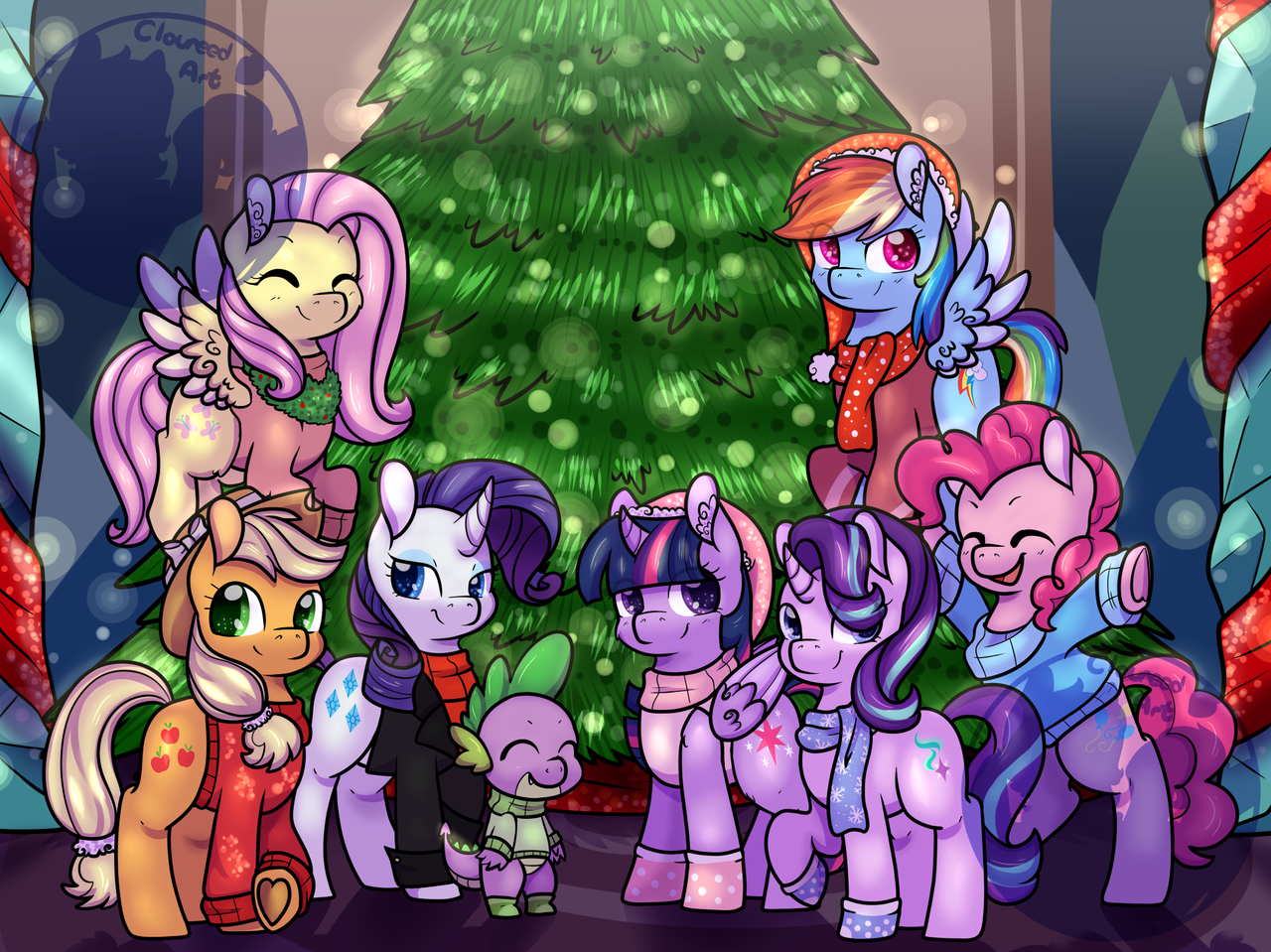