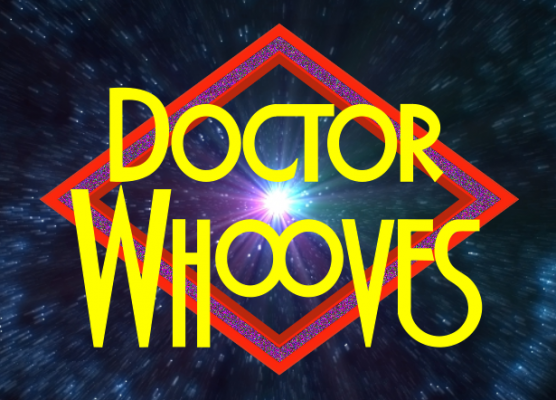 This one’s a bit different. I was originally planning on an article about the education system in Equestria for Monday, but I decided to do an early posting on a different topic. This isn't really 'worldbuilding', but it's my blog post, so I'll break my pattern when I want to.

It’s the 50th Aniversary of Doctor Who, and the start of Season 4 of My Little Pony: Friendship is Magic. @@CITRUS KING46 suggested doing a top 10 Doctor Who episode list to commemorate the occasion, and I honestly thought about it. I was struggling to pick out 10 best out of the ridiculous number of episodes in Doctor Who, when I decided to go a different route.

Doctor Whooves is pretty much why I’m in this fandom. I was curious about MLP, given the various PMVs rolling around, but it was fan-created Doctor Whooves that pulled me in. A character that exists simply because some fan thought that a background pony had a superficial resemblance to one of the actors portraying the Doctor. So I’m going to present the list of Doctor Whooves productions (not just stories, but entire series/authors/artists) that I recommend watching/listening/reading for a variety of reasons. And then I’m going to talk about *my* version of the character because my ego demands it.

For purposes of this post, I'm going to assume everyone who's bothering to read this far is familiar with both Doctor Who and Doctor Whooves, at least in passing. If you want me to write more about any of the topics I cover in the blogs, foundational essays or expansion essays, just let me know and I'll do my best.

Radio Plays – These are technically ‘videos’ but really they’re audios, with still frame pictures at best. They’re in the order I found them, not indicating preference, because I don’t want to indicate preference.

There’s also a potential one done by @ that is actually for a pony version of the Doctor Who spin-off Torchwood. I have high hopes for this one. Possibly because my wife tells me she's auditioning for a voice actress role in it.

Tumblers – Basically comic strips, but set up in an odd way, usually with interaction between the readers and the characters via ‘asks’. For me, these are more about the art than the story, as most of them take so long to do a story that I forget what the story actually is by the time the next posting occurs. 

Videos – These are just fun little things that I find amusing. They’re mostly audio clips from the actual Doctor Who series, with pony clips or animation overtop, but they’re amusing.

As a note, I’m not entirely sure why these ended up with 4 entries in each category. It was not planned.

The Doctor that I wrote about in my fanfiction is a bit different from others I’ve seen in the fandom. First off, no, that one story is not the only one I’ve written. It’s just the only one that’s complete enough to publish. The rest of them are plotted out to one extent or another but are not complete in any way. I have a two-tier story arc that follows what the classic series often had as a season with 26 episodes in total, the first one started in that one story (four episodes) is followed up in Doctor Whooves and the Cutie Makers (six episodes), Doctor Whooves – Astereon (six very vague episodes), Doctor Whooves and the Spaniel Mane (four episodes), and ending in Doctor Whooves and the Monsters of Manehattan (another six not really well thought out episodes). Which is then followed up with a ‘special’, which I haven’t got a name for yet. The second season is a vague idea which ends with another special that finishes the bigger story arc.

But I’m having trouble concentrating on writing fiction. Which is why I have this WorldBuilding blog, in an effort to force myself to write *something* on a regular basis.

One difference I have is that my version’s companions are very good friends with the Doctor, but there is no ‘romance’ there. Not because I’m against romance, or shipping, or the like, I'm actually all for romance in general, but that’s not the story I’m interested in telling with the Doctor. Those companions will likely have romance occur to them, but not with the Doctor. Not yet at least, as I’ve not come up with a compelling romance story concept for the Doctor himself. The story of Rose in the new DW series really soured me on the idea of the Doctor in a romantic relationship, because to be honest it was handled so very badly. Rose as a character became very unlikable over time, with her increasingly arrogant, self-centered, and self-serving nature that it just irritated me.

Another difference in my case is that I actually know exactly why and how the Doctor ended up in Equestria, and that is informing his characterization for me. There’s a reason, and one that prevents him from returning to his regular dimension. I’m not going to reveal it, because that’s kind of the point of the second ‘season’. But in any case he *is* the Doctor from the TV series, and while he wasn’t aiming for Equestria specifically, he did very deliberately travel through ‘The Land of Fiction’ (as seen in the second Doctor’s adventures The Mind Robber) to get where he is.

Most of you are familiar with the idea of parallel dimensions. I’m applying the concept of orthogonal dimensions as well. I figure not all dimensions line up nicely. I envision the majority of them being more like a pile of pick-up sticks. They may touch on occasion, but they’re not in any way parallel, and they may even be in 'motion' relative to each other. The more ‘angled’ the dimension it is, the harder it is to travel to. And the Doctor wanted to get as far away as possible.

This will prevent me from bringing in villains/monsters from the Doctor Who series into my stories, beyond some *really* heavy hitters who could duplicate the Doctor’s feat of breaking across multiple dimensions. But I’m willing to accept that. If I want to bring something

over, I’m going to have to work for it.

I didn't start with 'the Doctor arrives in Equestria' because honestly I don't have a story there. I decided to go with the other style of starting in the middle of the story, because honestly that's how most people start with the Doctor. Even I'm not old enough to have seen the first episode when it was broadcast. I started with the Third Doctor, Jon Pertwee, and I had to figure out what was going on by myself as things were relatively unkind to new fans back then. The internet didn't exist, so there was no way to quickly look stuff up, and trying to work out the right questions and the right people to ask wasn't that easy especially since I was in Canada, far enough away from England that I would be dealing with secondary and tertiary sources at best.

So in my continuity, by the time of Tartaurus, the Doctor has already been travelling with Derpy for at least a couple of adventures. In later adventures I intend on mentioning that at least some of the Mane 6 know about Time Turner's real identity. (And I'm using Time Turner as his fake Equestrian name the same way he tended to use John Smith whenever he *had* to use a name on Earth.) All this in an effort to recreate the 'feel' I had when I started watching Doctor Who back in the seventies.

Oh, while I'm on the topic I'm using the name Derpy instead of Ditzy because my wife thinks Derpy sounds more English while Ditzy sounds more American. I personally have the headcannon that her full name is Ditzy Derpy Do, but then I find alliteration, just like puns, amusing.

Anyway, this is not the David Tennant Doctor, despite the superficial resemblance. For me, this is a completely new Doctor, from far ahead in the Doctor’s personal time-line. Yes, past the 12-regeneration limit. I’m certain that will get addressed in the real series soon, maybe even tonight in the 50th Anniversary special, and I’m sure they’ll have some gobbledygook that will allow the Doctor to break the old limit. But from a plotting perspective I really do believe there still needs to be a true limit. Some point where the Doctor believes he really will end. Otherwise there is no threat, no risk.

And that’s where Doctor Whooves comes in. He doesn't know much about this dimension he's found himself in. He talks a good game, and pretends to know what's going on to reassure his companions, but except for some books he's stolen from Twilight's library, he's making it up as he goes along based on the strange 'real world' references he keeps running into. He doesn't know whether he can actually regenerate anymore, and he's about to find out that while he's adapted to the new dimension, the TARDIS isn't doing quite as well.

But the most important part of the Doctor is his personality, or specifically the twists each Doctor has. They're all the same person, but different aspects of his much larger personality get rotated to the fore every time he regenerates.

My version of the Doctor is more cautious than before, more willing to run away before he finds out what's going on. But at the same time he wants to know *everything*, meet *everyone* no matter who or when they are. He hates not knowing something, and this is a new universe full of things he doesn't understand yet. But more importantly, he wants people to save themselves as much as they can. The victims have to stand up, they have to fight, or at least they have to really, truly *try*. He'll be the distraction, the focus for the villain to concentrate on. He'll loan knowledge, strength, inspiration, whatever is needed. He'll be instrumental, but he won't do it by himself. He refuses to be the irreplaceable man.

Because that's how he failed before.