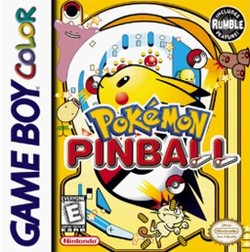 After the release of Pokemon Red and Blue and the premiere of the anime, the popularity of the franchise was skyrocketed into the mainstream. Pokemon got a board game, a card game, merchandise, everything! It even made it into other genres, such as puzzle games and....pinball?! Yeah, pinball, and it was good!

Pokemon Pinball is, of course, a pinball game with a Pokemon theme, being themed after the Red and Blue games. It features two tables, Red and Blue. This is clearly a small number but the unique designs for both and the adventure aspects of the game really hold it up.

The standard gameplay is what you would expect from something with pinball in the title. You control two flippers to hit a ball, which here is a Pokeball (Squee!). You hit it to get it to hit different point scoring structures on the table. For being a 2D handheld game, the pinball itself actually feels like it does have some decent physics. The ball has some speed and bounce to it when it hits obstacles. Make no mistake, the core pinball here is actually well done and the developers did a good job. I do not remember any major glitches, though I do remember a small one where the ball would slightly go through an obstacle but this was rare.

Here comes the really fun part. While pinballing (Is that a word?), you do the standard pinball stuff, collect points and complete little objectives for bonus scores. Here though, you are actually doing things that you would do in the actual Pokemon games! As you play, you will eventually travel to other towns from the games, and even run into Pokemon! This happens once certain conditions are met and then you must hit the proper obstacles to get the image of the Pokemon full. It is random on which one it is, in true Pokemon fashion. Then, you must hit the Pokemon 3-4 times to catch it. Catching Pokemon is actually really fun here and it provides huge score bonuses at the end. The more you catch, the more points you get! Gotta catch em all...to get that high score! This adventure gameplay is the best part of the game and captures the essence of the original games well, which is impressive for pinball. Of course, it being pinball, there is of course a part of luck associated. It can be a bit frustrating when you are doing good only to have the outlanes ruin your good streak. 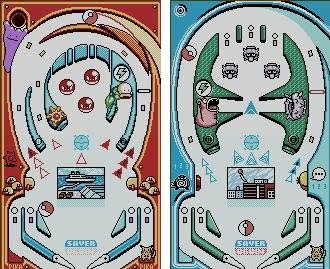 The two awesome tables! If only there were more somehow.

Another aspect that is well done is the visual and sound area. The two tables have a unique look and have different Pokemon as the obstacles, like Voltorbs for bumpers on the Red table or Cloyster on the Blue table. It lends itself well to the overall theme without being overly cluttered. The kickbacks are even Pikachus! (Squee! Again) The music and sound are both great too. The music is very lively, even when losing a ball, though that is still frustrating. The sound effects are also good with great noises for the bumpers and spinners on each table. Overall the sound is good, however there is some slight glitchiness when multiple things happen. The music tends to cut off when hitting bumpers or when the kickback actives. Any other musical hits precede the regular music. This is not a major issue, but an issue nonetheless. This is the GBC after all. Also, the classic jingle for when you catch a Pokemon is oh so satisfying here. There is also a full sound test which is a nice touch. 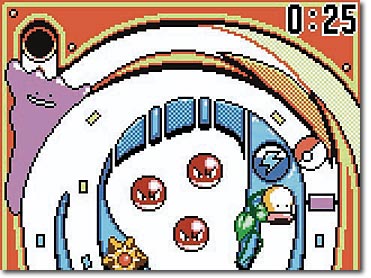 So much Pokemon here...

Really, the only huge flaw that the game has is the lack of content. As I said, there are only two tables and while they are well done, like anything, it can get old after a while. This game is best played in short bursts. There is a Pokedex here which is another great touch, this keeps track of all Pokemon that you have captured. This is a perfect example of a good portable game, as it is great to bust out for a bit when you are bored. 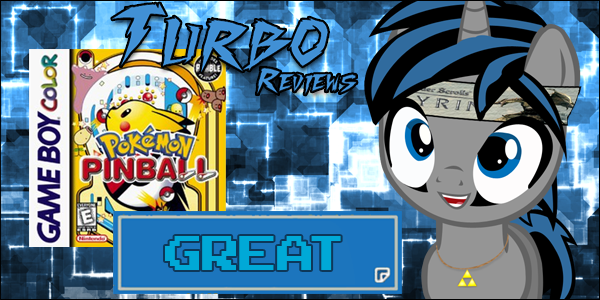 Pokemon Pinball sticks to its name very well. It literally is a Pokemon adventure Pinball game, though it is more pinball than adventure. The fun tables and very well implemented adventure aspects are blended smoothly with the pinball gameplay. Any potential frustrations that you may have due to the luck aspects will be forgotten pretty quickly. The wonderful music and sound design really help here. There is a definite lack of content so this game is best played in short bursts, but those are some pretty fun short bursts.

+Both of the tables have there own style

+Sound and visual design are great

-Some luck based aspects

Thanks for reading this week's Turbo Review! If you enjoyed it, you can follow this blog to be notified whenever a new review is posted!