None of us care about that dumb old idol. Don't you get it? We don't care about anything, and that's the way we like it! – Gilda

Synopsis
Pinkie Pie and Rainbow Dash are sent by The Map to the capital city of the griffon kingdom, Griffonstone. Twilight’s history books say it was a great city, united many years in the past by King Grover, using an artifact called the Idol of Boreas. When they arrive, however, the two find that the current reality is much different. The place is falling apart, nigh literally, and no griffon will give them the time of day… unless it involves getting money from them. 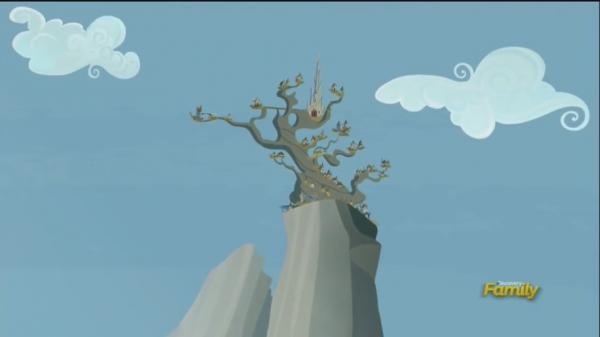 It's a little "eyrie", but the griffons call it home…

The pair comes across Gilda, who is as rude as ever, but they also meet her Grandpa Gruff. For a couple of bits, the older griffon confirms the story in the history book, and also describes the loss of the Idol during the reign of King Guto. A monster broke in to steal the idol, but both fell into Abysmal Abyss. The loss of the idol broke the pride of the griffons, leading to a decline of the state into its current… state.

Deciding that the Map sent them here to fix the problems of Griffonstone, Rainbow Dash aims to retrieve the Idol, leaving behind the more-thoughtful-than-usual Pinkie Pie. While Dash enlists the aid of a surly and apathetic guide to abseil into the Abyss in search of the idol, Pinkie returns to Gilda to try to find out more information. After seeing Gilda help another griffon, she realizes something and runs to find Dash.

Meanwhile, Dash is stranded in the Abyss when the rope she is using breaks, and her guide, hearing that Dash has no more bits, leaves her to her fate. Pinkie arrives and after a few false starts, runs back to Gilda to enlist her help in the rescue. Gilda remembers the good feelings her prior friendship with Dash provided, via flashback to Junior Speedster Flight Camp. She agrees to help.

While rescuing Dash, Gilda sees the idol, as well as the remains of the monster who took it all those years ago. 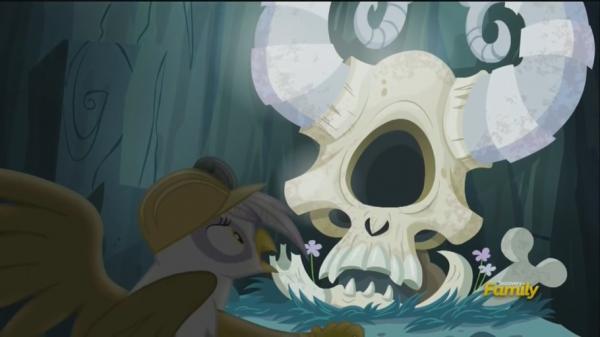 What’re you staring at?

Forced to choose whether the idol or Dash is going to take the fall, as it were, Gilda makes the choice to save Dash from her predicament. This leads to reconciliation between the three, with Gilda apologizing for her behaviour in her first appearance. Pinkie encourages Gilda to befriend the griffon from earlier, and replace the bonds once created by the idol using friendship. The Map then signals them to come home.

My Thoughts on the Episode
This is a mixed bag of an episode. The writing is pretty tight, and provides a lot of foreshadowing. Two particular examples stand out. The first is when they get off the train. The platform they are standing on is in a state of disrepair. This provides an early hint to the poor condition of Griffonstone itself. The second is when Pinkie steps over a crevice, and some of the rock crumbles and falls. This detail hints at the danger Dash will face later in the episode, when the ledge she is on likewise begins to crumble.

There’s been some… shall we say “vigorous discourse”… in the episode’s official thread with regards to the worth of the moral, which I don’t think I need to rehash here. Instead, I’d like to focus on a related but different matter. As in the premiere, the ponies are given what I’ve taken to calling the “Mission Accomplished” signal at the episode’s end, where their cutie marks flash and chime. But what mission was actually accomplished?

Both Rainbow Dash and Pinkie Pie assume that the Map sent them there to “fix” Griffonstone’s problem. If Griffonstone is in such a bad way, it does indeed seem like the signal is given prematurely (¯Understatement, my old friend / I’ve come to talk with you again…¯) But that’s assuming Dash and Pinkie are correct in what they believe. Can I blow your mind, just a little? Maybe they’re not.

If you look at what was actually accomplished, you might get the feeling that the Map sent them not to help Griffonstone, but to help Gilda. First point: if the objective was to help the entire griffon kingdom, it seems a little strange that the Map would send ONLY Pinkie and Dash, the two ponies who were wronged the most by Gilda in Season 1. Why not send the whole of the Mane Six?

Second point: at the end of the episode, there are two things can be most definitely said to be “fixed”: 1. the relationship between Gilda, Dash and Pinkie, where she actually apologizes to them and they mend their fences. 2. Gilda's loneliness: she makes a griffon friend of her own, thus ensuring that she isn’t left alone again when the ponies leave. This feeling was strengthened for me by the fact that the Mission Accomplished signal is given after she returns and reports to the two ponies that her offering of a griffon scone was accepted and that she had been complimented by another griffon for the first time in her life.

Third point: The Map accomplished one more thing with regards to Dash. Her broken friendship with Gilda was repaired. For one of the ponies whose new job it is to spread the magic of friendship, it might be considered somewhat of an albatross around her neck to have such a snarl of disharmony lying in her past. Biblical anecdotes regarding specks and logs come to mind. Perhaps the journey was as much for Dash's sake as for Gilda's.

As a bonus, given this viewpoint, that controversial little moral becomes somewhat less of a glaring flaw in the episode. True, not true? I dunno. I just offer it as a different perspective on the episode. I think it holds up well enough to at least give it a bit of thought.

Some other nice touches to this episode include the art shifts for the History of Griffonstone sections, yet another weird beasty (sadly deceased) to add to Equestria’s Monster Manual, a glimpse of the "aww, so cute!" filly and fledgling friendship in flashback form and some comedy provided by Gilda’s constant snark, as well as a few laughs courtesy of Pinkie Pie.

The final scene was perfectly done. I know some people feel that it would have been funnier if Gummy had finished the cake, but c’mon, who do you think he is? Boulder?

I find it much funnier to consider that he has literally been lying there in the same position throughout however long Pinkie’s trip took.

So what are the negatives? (You know, apart from the obvious one…) Well, this tendency to name every single griffon using the letter G is really, really getting to the point of irritation. (Meet my newest sob story OC: Harrold the Griffon, banished forever for bucking the theme-naming trend.) Seriously? Grover, Guto, Gilda, Glenda, GRAMPA GRUFF (That’s a twofer, Celestia damn you!) It’s getting gauche, ghastly and groan-inducing! 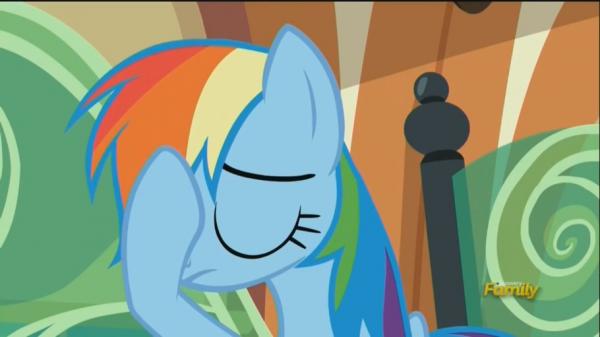 Pros: Plenty of foreshadowing. There is a continuation of the arc started in the premiere. Gilda actually gets her redemption episode (finally).
Cons: The moral is (from certain perspectives) as entirely broken as the houses. The griffons really need to explore the ramifications of the rest of the alphabet.

Rarity’s Cutie Mark Rank – A scintillating story! Sure to be rewatched frequently.

Rock Candy Rank – A highly enjoyable episode, but it couldn’t avoid a cavity or two.

Tom Rank – Average. While it looked like a diamond, it turned out to be just a rock.

Boulder Rank – Below average. Take it out once or twice, then leave it in your pocket.

Rock Farm Rock Rank – A terrible episode. Leave it where it lies.

May the next episode be less contentious, and as always, stay sunny side up!