...mostly because there were no opportunities to do so. Anyways, blazeit:

I finally got around to watching this after it disappeared from my DVR all those weeks ago. And I can't believe I missed out on such a well-written episode.

Really now? Well, if "For Whom the Sweetie Belle Toils" is any indication, then maybe this season can save itself after all.

....wait a minute, I just remembered something. Josh Haber wrote this episode. You know Josh Haber's last episode was?

AAAAAAAAAAAAAAAND just like that, my confidence in this episode's quality has dropped substantially. Let's crack into "Leap of Faith".

So this episode opens up with Big Mac and Applejack in a pond splashing water at each other in what I think is the shittiest animation the whole series up to this point. It looks like a fucking toy commercial it's so bad. What a great start. At this rate, next scene will involve Rainbow Dash getting syphilis. Wait a second, that's not a good allegory, 'cause that would actually please me. Everyone tries to encourage Granny Smith to get in the pond with them, but she goes on a long-winded explanation about why she's afraid of water. After the "Skip Intro" button blows me some minty-fresh fellatio, the Apple Family notice a bunch of sick and hurt people walking in unison like a band of zombies to a circus tent. You just can't make this shit up. When they go to investigate they se- 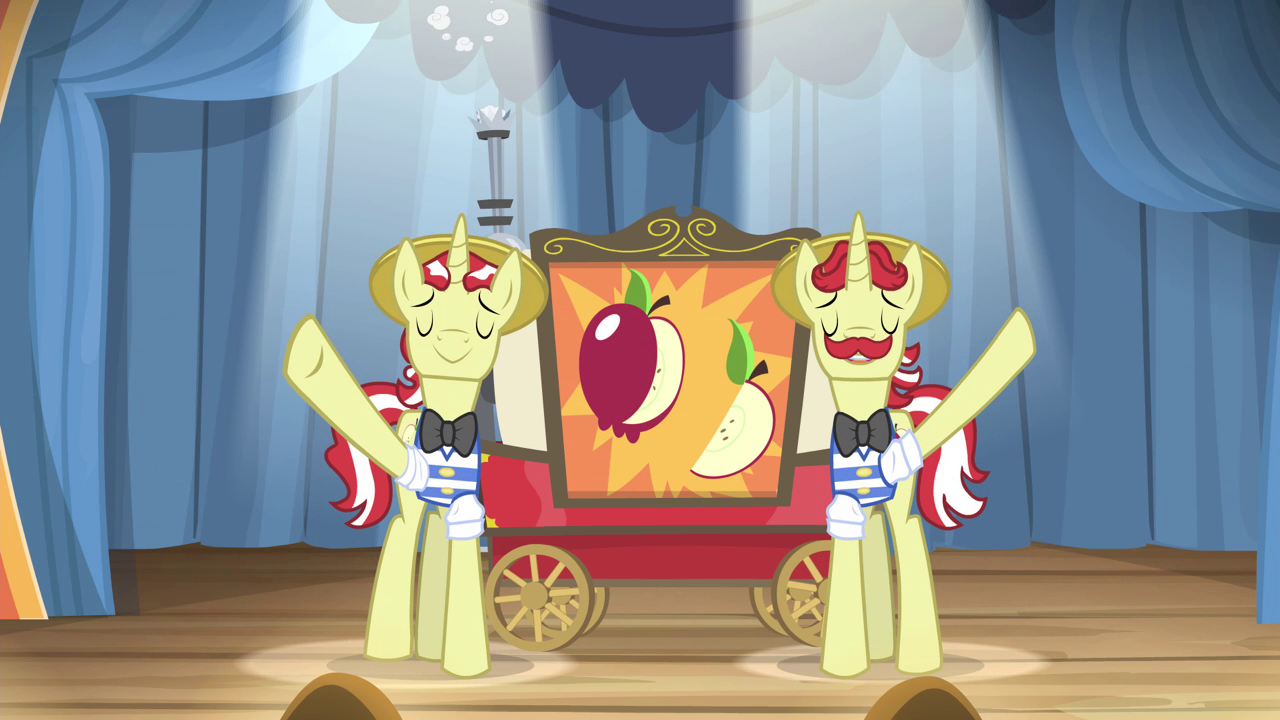 *ahem*. Alright, I'm good now. Err, they proceed to sing a rip off of the Super Speedy Cider Squeezy song, now trying to pawn off their magical sickness cure tonic. As it "appears" to work on some members of the audience, Granny Smith is sold and decides to buy the tonic so she can regain her youth again. Applejack remains skeptical, but the old hag certainly gains a few springs back in her step after she downs the shit, even to the point of being able to swim again. Hey, how handy! This only makes Applejack more skeptical as she and Apple Bloom try to figure out what's actually in that elixir from the depths of Hell. When they arrive, they find one of the same ponies that were cured in the first show...pretending to be cured a second time. Logically, Applejack and Apple Bloom chase this fucker down until they learn his name: Silver Shill. Wow, what a standout name that doesn't sound like any other character's name in the show ever. They discover that he's part of the act, and follow him right to Flim and Flam themselves. Applejack confronts them about their bullshit, but explain to Applejack that even if their potion were just a mixture of apples and beet leaves, this tonic is making Granny Smith feel better. So, basically they say, "what's the big fuckin' deal, bitch?" 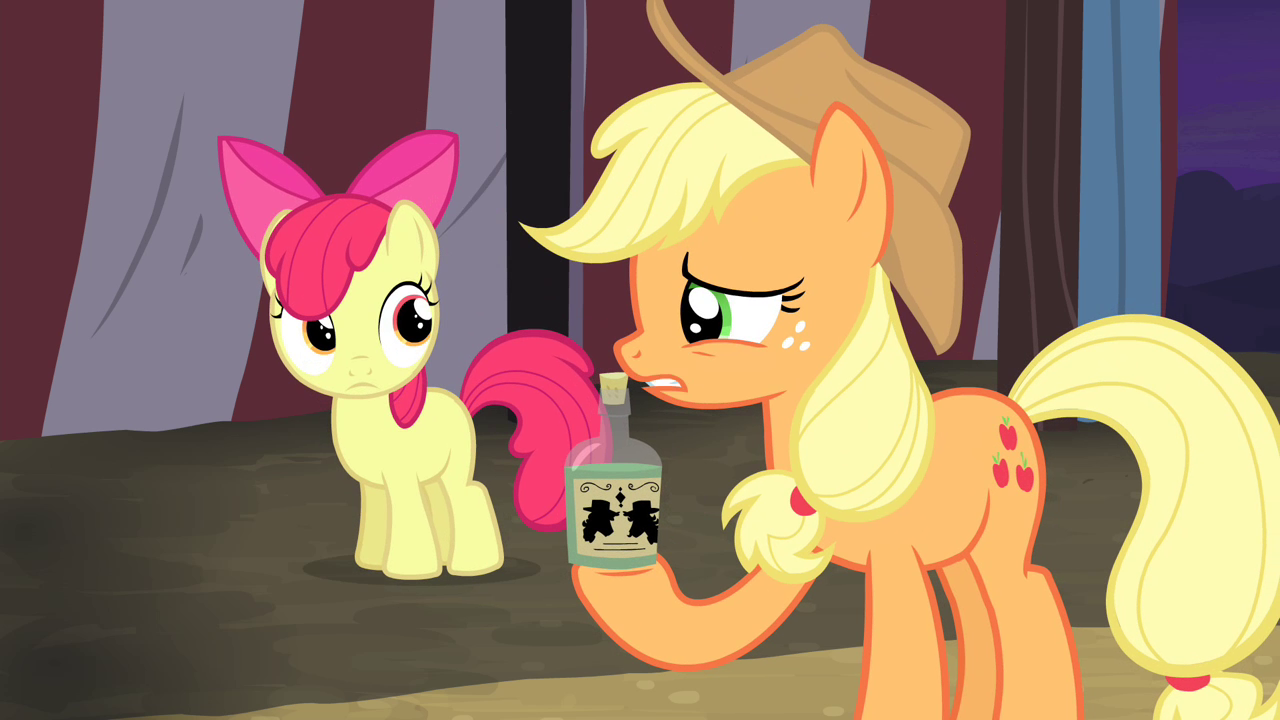 Back at the pond, Apple Bloom asks Granny Smith to help her compete in an aquabatics competition...'cause...y'know...that's been Apple Bloom's dream this whole series. Therefore, in order to compete, she buys the Flim Flam Brothers' entire case of elixir. When people start asking Applejack if it really works, and she replies that it seems to work for Granny Smith, everyone is instantly prepared to chuck all their money at the Flimmerfloosels. Why is this important? The Flock'o'Fuck Bros. turn Applejack into the poster-child sponsor for the syrup, which in the event that the tonic doesn't work for other people, means the whole town will totally turn on her and burn her alive until she's a nice, crispy lunch dish at Apple Bloom's school. Later, at the aquabatics competition, everything goes off...without a hitch surprisingly. This even promotes the Super Mario Bros. to make the Apple family the official spokespersons for their tonic. Applejack, however, is not putting up with any of their crap. There's no time for Harplejarkle to kick Superior Mario Sibling ass today, though, because Granny Smith has gained enough confidence to do a legendary dive! 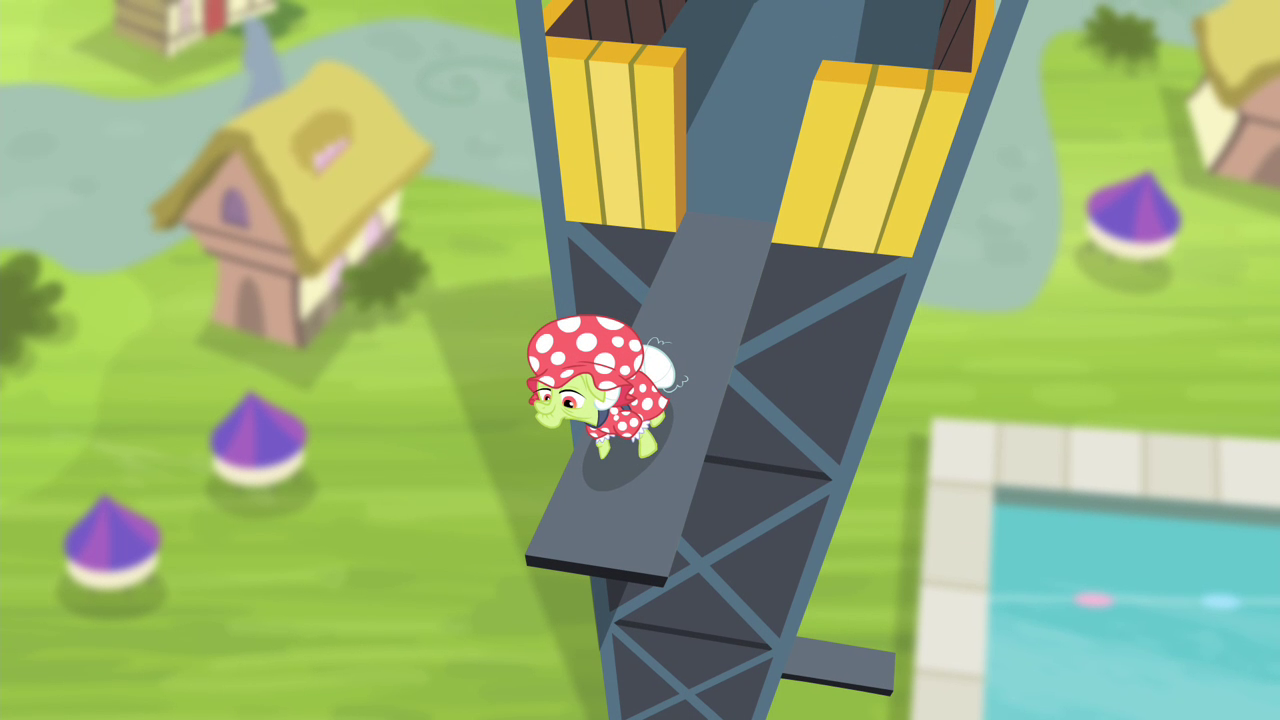 Granny Dipshit takes one last sip of the potion before jumping to her doom, but not before Applejack lasso's her ass and saves her life. Son of a bitch! I wanted to see some gory gut-busting explosion shit this morning! A nice beating heart stew on the grass below where the ants can build their next mound. Can you imagine it?! Those little fuckers creating a network of tunnels through Granny's tangled intestines. It would've been amazing! And Applejack just had to go and ruin it! What a sick, evil, twisted bastard she is. She should be annihilated! Eviscerated! Turned into apple cider and sold on the black market in exchange for foreign child slaves! Then we'd see some real action in this fuckin' country. Goddammit Applejack, ya ruined everything!

Oh, and this is a key episode apparently. 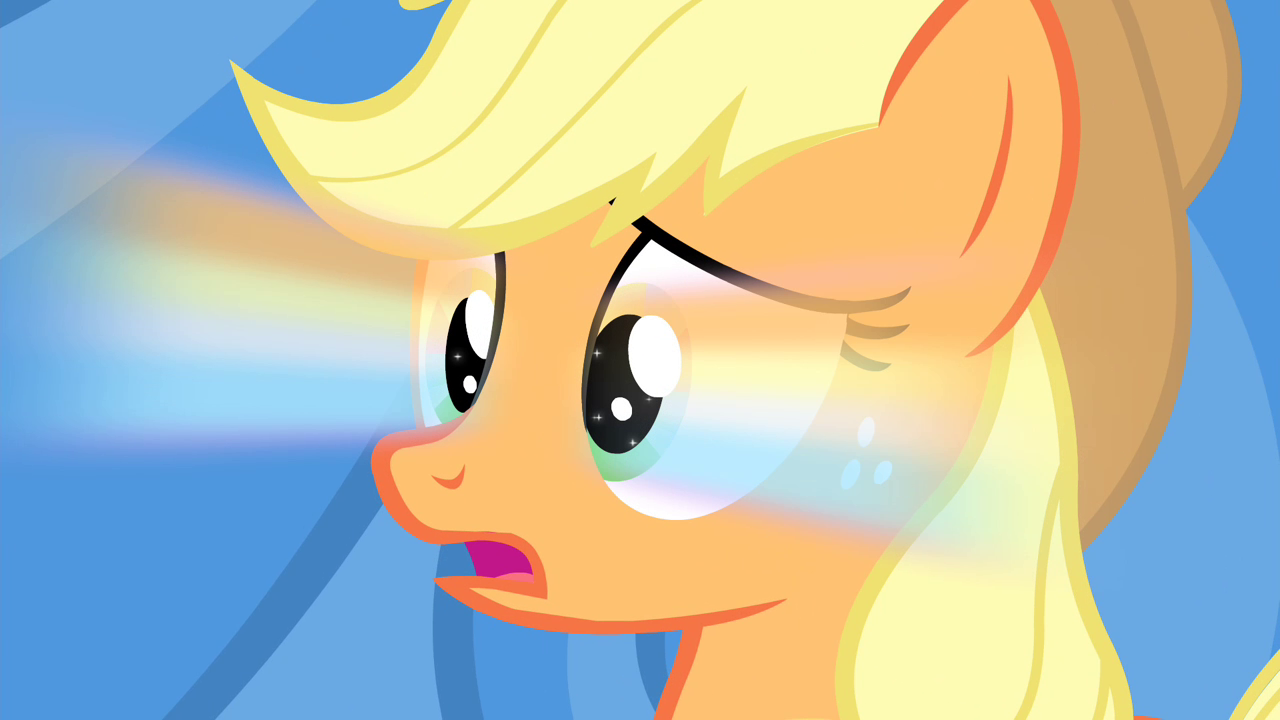 REEEADING RAINBO-...wait, I should save that one for Twilight's key. That'll be funnier.

Applejack fesses up to the crowds, exposing the Flavor Flav potions as a fake! This of course, prompts the whole town to accuse Applejack of lying...which she admits to. Sorry......what? She...didn't lie. At all. The only thing she ever said was  "it seems to work for Granny", which were TRUE STATEMENTS by her account. Anyone with vision could see that it seems to work for Granny Smith. That doesn't mean it fucking does. Everyone else made that conclusion. Therefore, it's the townspeople's fault for jumping the goddamn gun. Of course, this doesn't make for very good PR. So Applejack goes the whole sentimental route of "hoping to gain the public's trust once again" like some kind of celebrity Twitter apology, and Silver Shill ultimately fesses up and admits to this all being bullshit. Then he gives Applejack some money...which is about the sorriest fucking excuse for a key yet. Also, I like how all the other ponies had their keys given to them by characters that at least had some spotlight in this episode while Applejack gets this side character that had all of two scenes of screentime. GG, now it's time to indulge the journal. 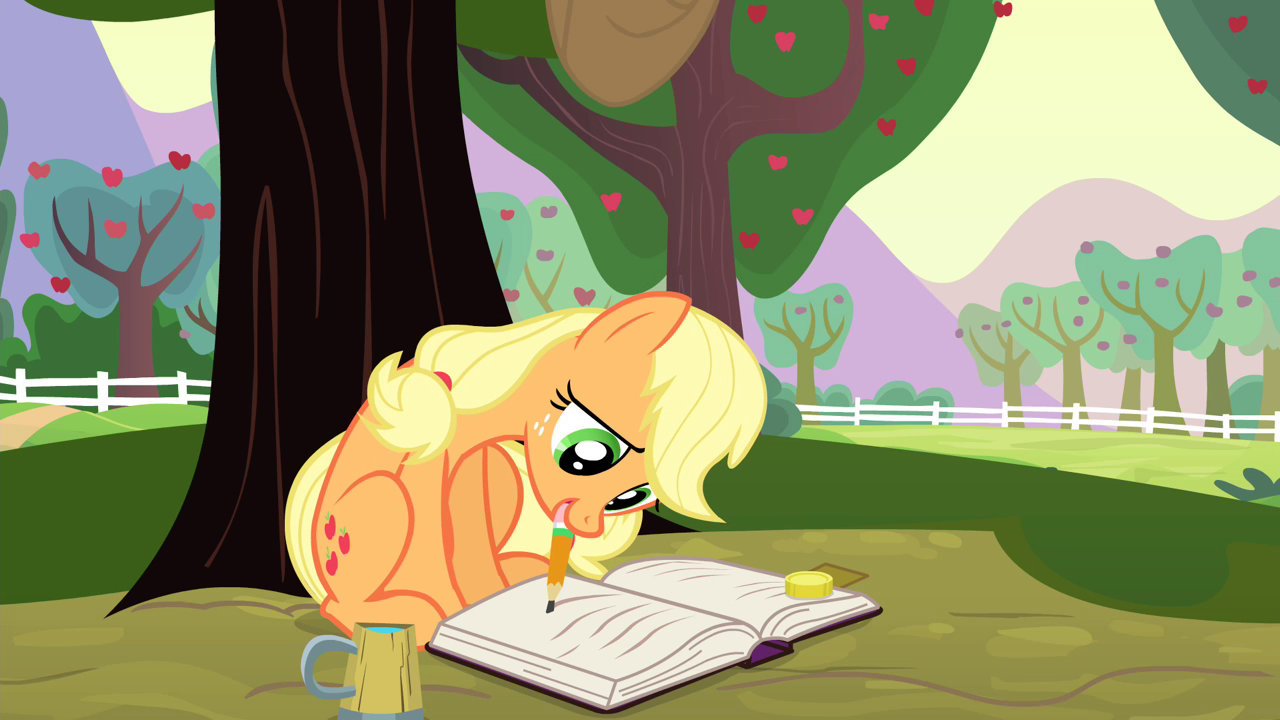 So Applejack learns that having others believe a lie is about as stupid as that picture up above, and thus concludes "Leap of Faith".

There's some pretty good things about this episode. The conflict of having Applejack choose between being honest with the public and maintaining her family's happiness is certainly an interesting one. We see Applejack deal with two things that make up her character; her loyalty to her family and her honesty, clashing directly against each other in a way we haven't seen before. That's very nice and all, and would've made for a "well-written episode" like I mentioned above if the last four minutes didn't take a nosedive. It's no Equestria Girls leap, but the fact that she admitted to lying when by all accounts she technically didn't, and that this ended up being the lesson taught in the end...it's shaky at best. Even the Flim Flam Brothers weren't that interesting in this episode, basically just retreading their ground from "The Super Speedy Cider Squeezy 6000". Ultimately, "Leap of Faith" is an okay episode with some okay writing. Nothing special, though, by far. I'll give this episode a 7/10.

America is a systemically oppressed country.