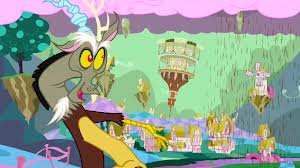 Very aptly the picture this time shows Discord at his most chaotic.

He has defiantly been over England over the last year! Drought, then straight into the second wettest year on record!

But more recently making it snow in march. When crocuses and daffodils started to sprout and flower i thought it was defiantly spring time, but oh know, the last 2 weeks have seen freezing cold weather and random outbreaks of snow. In my (somewhat short) lifetime I've never seen anything like it!

I also wanted to mention how I think I'm going to re watch the entire MLP:FIM again (7/8 time) over the Easter holidays. I really want to re watch season 3 but I can't bring myself to at the moment (deadlines and what not). For me it just lacked something the other season had (admittedly I was rushing to watch it most of the time having had more things to do from being at uni). I started to feel like they where maybe pandering to the brony fandom a bit more where as the storylines for the first 2 seasons where made purely for the younger fans and where just brilliant anyways. Some of the episodes felt like they where trying to get a 40min long episode into 20.

However, I will not make proper judgement until I have re-watched it all again! I want to take my time with it and try to enjoy it properly like I did when I first wasted S1 and S2 (which I loved so much)