For lack of an artsite account I'll use this blog post as a go to reference for my OC Scrumpy.

I don't get too much time to draw so I edited a draft image, the one that was a practice run for doing my avatar. 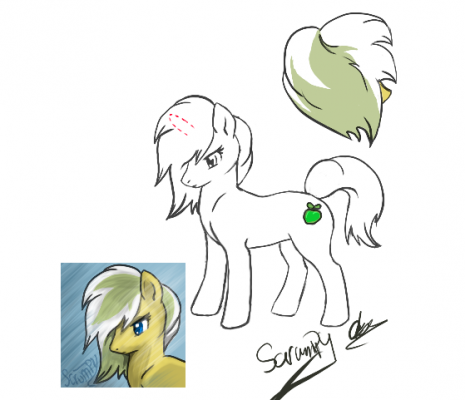 Yes she is a unicorn, but she just wants to fit in with the earthponies as she doesn't use her magic for anything too powerful or ambitious, infact she gets the most pleasure out of helping stack hay bales and other simple or otherwise mundane things, she would rather a cold drink on a hot day to being a princess or the head of a company.

Her work ethic is odd, she is not lazy, but she is lax and work for the sake of work is not at the top of her priority list; when roused she prefers to do a job quickly but get it right first time so she can hurry back to sun bathing or otherwise looking "lazy". She works hard and fast, but won't work if she doesn't have to, she'd much rather be catching local chit chat or swiming in a lake and having fun. She likes to read, but leaves it untill it is dark or raining outside. Her fave hobby is landscape painting.

Also if you believe Pegasi are capable of having Unicorn or earthpony children and vice versa (see baby cakes episode) then Scrumpy's alternate form is an Aci-corn / Incidental Alicorn (NOT a PRINCESS).