In this episode, another of my theories goes belly up (I sincerely hope), and I’m forced to make some retractions… what do you think of that, Jack? 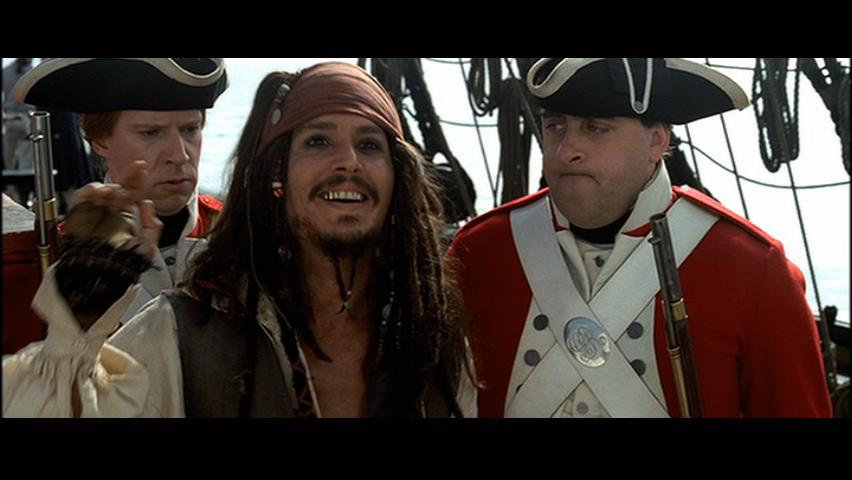 A gigantic monolithic ship is hit by asteroids and crash lands. Next we see Jack and Ashi in a desert city. Jack samples some of the local cuisine and gets his head transformed into a fish. Ashi is less than enthused, but luckily it quickly wears off. They board a gigantic camel, along with a large number of tiger-headed aliens.

In the crowded quarters, Jack and Ashi are pushed together, and it gets a little awkward… we see quite a bit of UST between the two as they try to avoid touching hands and any other bits, in fact. The will-they-or-won’t-they-tête-à-tête is interrupted as they are attacked by the tiger aliens, and forced to escape out a window. They swing down to the desert on the reins and continue on foot.

A gigantic sandstorm begins, and they seek shelter in the crashed ship from earlier, which is revealed to be huge. They make their way deeper and end up getting lost, when something starts chasing them. Ashi gets bitten by a venomous slug, forcing Jack to suck out the venom. 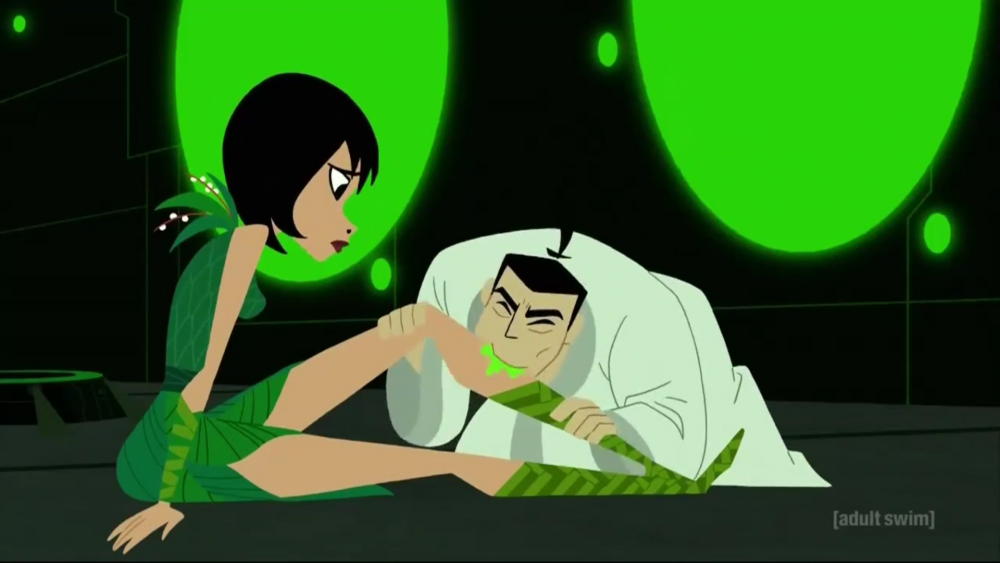 Oh, by the way, “ashi” means “leg” in Japanese, so get your mind out of the gutter! You’re blocking my light. As they continue on, they find themselves being stalked. Their enemy is revealed as a colony of slugs like the one from earlier that form a giant monster. 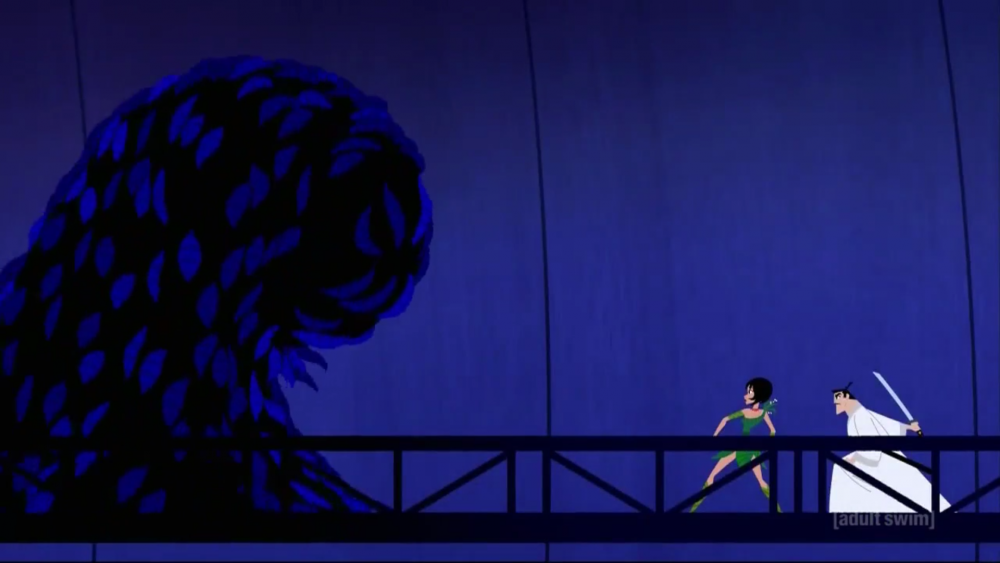 Jack eventually finds an armoury with a device that can destroy the monster, but the critical part of the explanation is lost when Jack is distracted by Ashi accidentally discharging a blaster into the wall. The two take the device and move on, Jack desperately trying to activate it.

Ashi, having armed herself with a double headed sword and a shield, once again takes point as Jack struggles to use the device. The slug monster attacks them again, and Ashi ends up losing her outfit to its attacks. She feels no real qualms about fighting in the buff, but Jack certainly does and is forced to use his gi to cover her. When Jack admits he has no idea how to work the device, they trade roles back and forth. They finally manage to activate it just as the slugs swarm all over them. The device makes the slugs explode, leaving the pair alive, panting from exertion and covered with slug goo. Perfect time for a Big Damn Kiss! 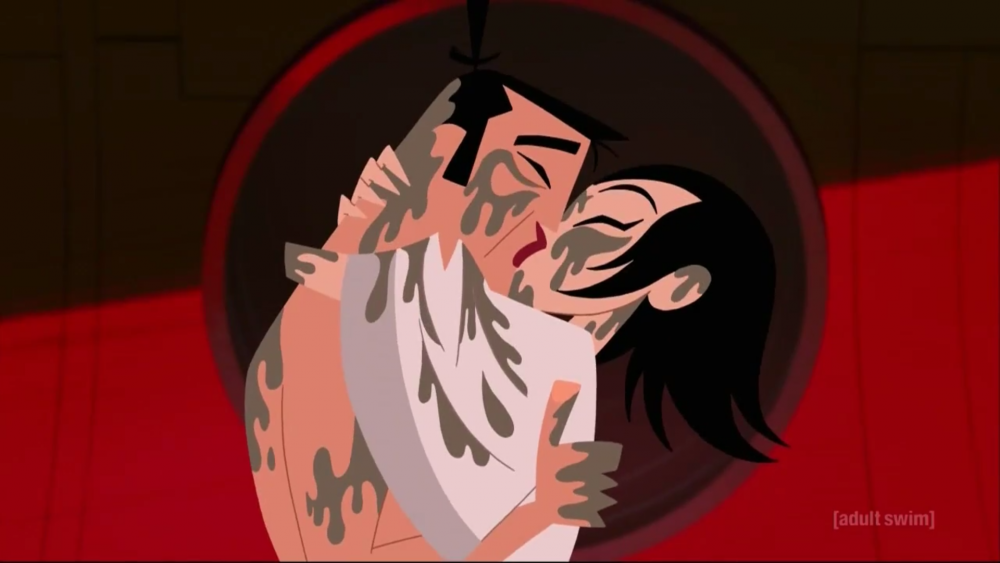 "Romance in Samurai Jack? Surely you can’t be serious!”
“I am serious, and don’t call me Shirley.”

On Jack and Ashi’s blossoming romance: *sigh*… the Rule 34 squad is going to have a field day with this episode. Which brings us to my first retraction: I was also wrong that Jack and Ashi would be revealed to be father and daughter. At least, I really really hope I’m wrong about that, because otherwise… ewww.

Even worse, Ashi technically already fulfilled the first part of the Electra Complex double whammy, when she killed her own mother. We can probably take it as read that there is no familial relation between the two, because surely that would be a bit too squicky even for this season.

With that caveat, I don’t really object to Jack and Ashi getting their freak on together. Sure, there’s an age gap and a probably even larger experience gap, but they’ve been through a lot together in a short space of time, and Ashi’s speech about how he saved her life and showed her the truth of Aku’s evil gives them bonus relationship points. Plus there’s a hint of real world psychology in the way they ended up, ahem, sucking face. Known as Misattribution of Arousal, in situations that involve a heightened arousal of the nervous system, the signals generated by fear, exertion or similar can be misinterpreted as physical attraction. How much this works in reality is up for debate, as with so much psychology/sociology research (the “squishy” sciences), but it’s a good enough working theory. Ashi not feeling any shame about fighting naked is a pretty clever touch, given the revelation that she always fights essentially naked, and Jack’s reaction to her nudity is adorable and in-character too. So all in all, the romance angle is pretty well justified in my mind, but YMMV.

Since I’m in a retracting mood (I’m assuming Jack is not, at this point

)… uh, do you remember my review of Episode XCIII, in which I opined that the tiger-wolf subplot was unnecessary and didn’t contribute? Well, whoops. Second retraction: that was foreshadowing for this episode that the tiger guys would try to kill Jack. 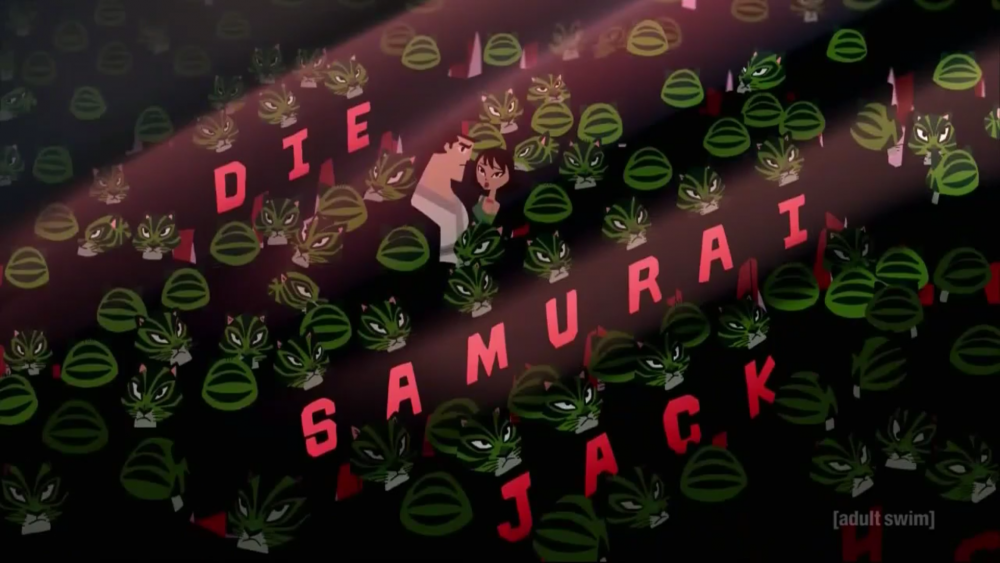 This might also have been a bit of a clue, in hindsight.

In other news: I liked the villain of this episode, a non-sentient hive-mind of venomous slugs. There’s been a great variety of foes for Ashi and Jack to fight this season, so the creativity category gets a solid ten out of ten. This show has never had a problem with creativity and it’s good to see this is still the case.

In the category of things to question, I’m not sure how much I liked the fish-head scene. It seems rather out of place… although, one earlier season episode had Jack being magically transformed into a chicken by a bad tempered wizard, so perhaps it’s more a return to form i.t.o. the comedy? It just seems odd given the darker tone of Season 5, so maybe the contrast is responsible for this seeming like a Big Lipped Fishhead Moment.

It also seems a bit odd to dedicate a whole episode to forging Ashi and Jack into a Battle Couple. Fun though it was, it didn’t really change much in the grand scheme of things, making it seem like filler. There again, it avoids the whole Avatar: The Last Airbender issue of keeping the leads’ romantic relationship up in the air unnecessarily, so perhaps the episode deserves its place in the lineup.

To sum up, this was definitely an interesting turn of events, but I’m not entirely displeased by it. It’s good to see Jack having things going his way after how much he’s been suffering, and they do make a good couple… assuming as always that certain theories are wrong. Jack will one day be an emperor, after all, and an emperor needs an empress. In fact, I foresee the final scene of the season showing Jack and Ashi in the past, with their newborn heir as the ultimate happy ending… make it sho, numba one!

And with that, little remains but for me to invite you to comment as you will, and as always, hope that you stay sunny side up!