*blows dust away* It's been how long since I did a blog? Two months? That's not too bad. Wait, who am I talking too?  I suck at writing intros...

Greetings, everypony, your friendly neighborhood Woohoo here. For a while now, I've been thinking about using my blog on a more regular basis. Up until now, the only regular thing I do here on my blog is "Woohoo Rewatches: MLP Seasons," which is way too infrequent if you ask me. After weeks of thinking of ideas (mostly thinking up of a title), I finally came up with something.

So here's the launch of my new projected, it's called:

"You can't spell 'slaughter' without 'laughter' and these songs are jokes." Midnight Scribbler came up with the name and subtitle

What is "Musical Manslaughter" about? Well if you can't tell by the title, I basically rip apart songs I absolutely hate in a pretty exaggerated and humorous way and give them a score. It's kind of like Mr. Enter's "Animated Atrocities" (only with less shouting) mixed in with Buckley's "Musical Autopsy" and "Todd in the Shadows." Also like Mr. Enter, I've created my own scorecard (seen below) where I'll score the songs on the following categories:

It's still somewhat of a work in progress... 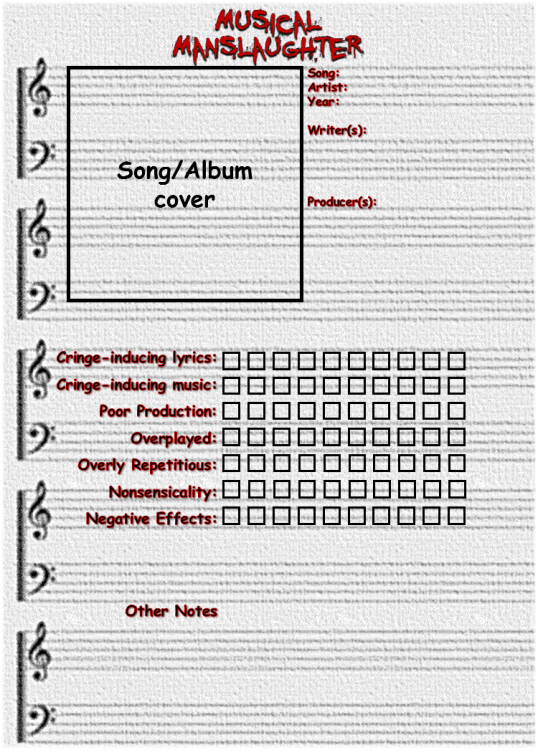 Now for some disclaimers. This is all my subjective opinion, so don't get your jimmies rustled when I tear into a song you like. Just because I hate your favorite song doesn't mean I'll hate you (but I might hate you if say something like "how dare u! dis is da gretest song eva and ur just a jelus hater! >:(")  Also, I am not, and probably never will be, an expert on music so my opinions may come off as flawed. Like I said earlier, it's all my subjective opinion. I don't think I ever have been objective... maybe. Oh, one more thing. I don't take requests.