Hello, folks! After careful consideration, I've decided to start this special blog specifically for the purpose of following Maradice Isle's ongoing development! The game's come quite a ways since it all began, but it's still got a LOOOOOONG way to go! Here's to hoping we can have it done before 2021 arrives! But with an RPG of this scale... that's pretty unlikely.

Anywho, before I go off on a tangent, I would like to detail some of the things that have been accomplished with the game recently. There's a lot to cover here, so settle in.

A lot of changes have been made to how the menus handle. The one change you'll notice right off the bat is that the option to quit the game was replaced with a new "OPTIONS" menu. This is something that doesn't come naturally with RPG Maker VX Ace, so scripts had to be used to get this to work.

The options menu handles pretty much how you'd expect: You can adjust the window color, change the music, background sounds, or sound effect volume levels, and even turn on "Auto-Dash", eliminating the need to hold down the run button to move quicker. Also, an option to have text boxes load instantly, or one letter at a time, as well as an option to skip battle animations during battle is in there, too, for those who want to speed up the game during those grind-heavy moments.

Another change that was made was changing how character equipment handles. Not only has the equipment menu been changed completely, there are now TWO extra equipment slots. One for another accessory, and one dedicated to Power Orbs, special collectables that grant you new abilities when you find them across Equestria. These alone will encourage you to explore every nook and cranny to try and get all 56 ( 8 for each of the 7 classes ).

The Seven Seers had access to vast amounts of power thanks to the 56 Power Orbs they all carried during their adventures 5,000 years ago. However, when the big battle with Strange Tidings occurred, the Orbs got misplaced and eventually wound up in what would become Equestria, going into hibernation.

With the arrival of the four player characters, and thanks in part to the Seers Awakening Call, the Orbs, and the Essences that live within them, are beginning to awaken again, and now it's up to the player, should they choose to do so, to explore all across the kingdom and find the 56 Power Orbs. And believe me, you WANT to go out of your way to find these babies!

Each time you get one, you can equip it to one of your characters to give them some minor stat bonuses. But in addition to that, every time you find a Power Orb, you'll unlock a new "Summon" to add to your characters list of attacks. In addition to this, collecting a specific amount of Power Orbs ( for example, 1 Frost and 1 Ember ) will unlock some Special Summons of increased power. All of this is activated by using the "SP" meter, making it useful for more then just activating Ultimate's when it's full.

Some Power Orb abilities inflict status conditions on the enemy, some can restore MP to the party when used. And there's even a couple that allow you to almost completely resist the damage dealt to the party on that turn! So for those of you playing along at home, FIND THOSE POWER ORBS!! You'll be kicking yourself later if you don't.

Here's a little party favor for you: The moment you enter the main overworld of Equestria ( after leaving the San Palomino Desert ), you'll be stopped by the first Frost Power Orb, Frostbite, who's Essence will proceed to show you the ropes on how to use Power Orbs properly. So in case your worried that you'll be struggling to figure out how they work, worry not, because that's not the case here. And if you already do know how to handle them, there is an option to skip this tutorial. Those of you who need a refresher course on Power Orbs later down the road can always refer to the Playing Manual in the Key Items tab. Aren't you glad you got that thing at the start of the game?

Oh, and for those of you with short-term memory issues, which I assume would be a fair amount of you, you can check out what Orb's you've found in the "Power Orbs" tab of the items menu.

Somewhere in the San Palomino Desert, you will come across the first of the seven shrine's that will be in the game. These shrines offer up unique equipment when you complete them, but be forewarned: They are not for the faint of heart.

Everytime you find a shrine, you'll likely be met with the following:

Upon entering a Shrine and approaching the huge door that bars access to the central chamber, you'll notice a sign on the wall that reads as following:

"If you do not wish to die here,

your objective is quite clear.

make each orb shine with a brilliant light.

Take note, brave one, for though you are strong,

you'll soon regret it if your answers are WRONG."


Branching off the main hub of each shrine, you'll find four rooms, each containing a trial. Some will challenge your knowledge of the Seven Seers and their stories, while others will simply be gauntlets of enemies you must defeat to progress. One of my favorite ones is where your guiding a power sphere past red orbs to the other end of the room. It's certainly quite entertaining. And those who REALLY like this mechanic can look forward to getting to Ponyville, since there will be an arcade machine somewhere where you can play this little mini-game again.

However, as the warning above might imply, some of these trials don't take kindly to incorrect answers. If you get the answer to some of these challenges wrong, you'll have to fight a battle in order to try again. And at lower levels, the enemies you'll face might just mop the floor with your tails.

As you complete a shrine's trials, four orbs on either side of the large door in the main hub will light up. When all four have been lit, the door will open, and you'll be granted access to the final chamber, where the shrine Guardian awaits...

In this first shrine, the Guardian just so happens to be a Tatzlwurm, armed with Equality spells that will keep you on your hooftips for the entire battle. These spells include, but are NOT limited too:

Yeah, this guy's not exactly a picnic. On top of this, he actually gets STRONGER the more shrine's you've cleared. So for example, if this is the first shrine you've ever tackled, then his HP is only 2,900, and his attack power is pretty moderate. He can still be trouble, but he's manageable if you play it right.

HOWEVER, if you waited until the very end to tackle this shrine, and you've finished all the other ones, this guys HP gets cranked up to a ridiculous 27,000, and his attack power is almost x7 what it was before, and all of a sudden, you've got a VERY intense fight on your hands! Add on the fact that he'll be granted more power Equality spells once I've programmed them in, and you will definitely need to bring your A-game in order to come out alive!

All these stat values are subject to change in the future, but it goes without saying: Shrine Guardians get more powerful the more shrine's you've cleared. So before you go marching into that shrine you just found, try tor remember just how many shrine's you've already done, and consider the possibility that you may need to level up a little more before you can tackle that next one.

So, what kind of loot are we talking about here? Well, aside from the few treasure chests you'll find scattered around the shrine as you explore it, there's also the items the boss might drop, which include stat-boosting items. But it's the treasure they were guarding that we're all here for. These unique items grant extra-powerful benefits to the player when equipped. One of these items enables dual-wielding of 2H weapons, allowing your Ember Ponies to do some serious damage with their physical attacks! One doubles magic damage power, but cuts physical attack power in half, which would work great on a Thunder Pony!

But perhaps the best one out of them all: THE GOLDEN CHALICE, which eliminates random encounters altogether when equipped! It's unknown which shrine this beauty will be put in, but it's a safe bet that most players will skip over all the other shrines and go for this one first, because who doesn't want to be able to explore the world without random encounters getting in the way? GRANTED, it won't save you from Monster-In-A-Box's, or from boss fights, and whoever is holding it can't use the "FIGHT" command, but it's still the best one out of the bunch.

( Here's a little tip: Those of you who have beaten the demo version of the game can get the Golden Chalice right away by inputting the special code that was given at the end of the demo. )

Obviously, A LOT has been going on with the game lately. But now that the story has moved into Equestria, it's becoming more and more important that volunteers are brought in to help assist with creating the tilesets needed to bring these locations to life. If you've experience with sprite design and think your up to the task, please join the official development Discord server for the project. Invite code is right here: "VabKgSC". Please note that you must be placed under one of the actual "Roles" within the server in order to see and post messages, so if you see nothing when you join in for the first time, do not be surprised. This was done to keep the "UNDESIRABLES" out of the chat.

Hope this blog post has helped to shed some light on what's been going on with the games development. Hope to see you again soon! 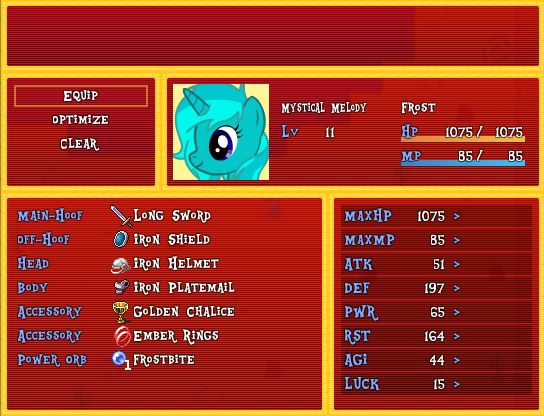 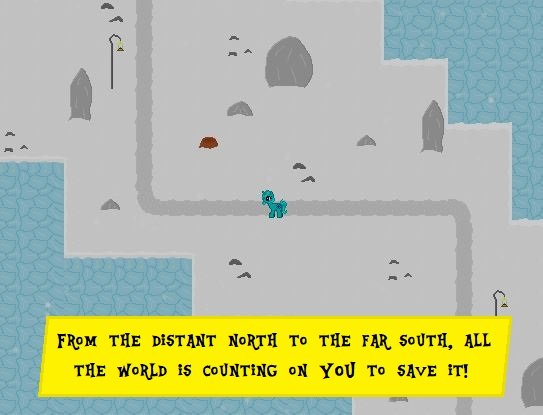 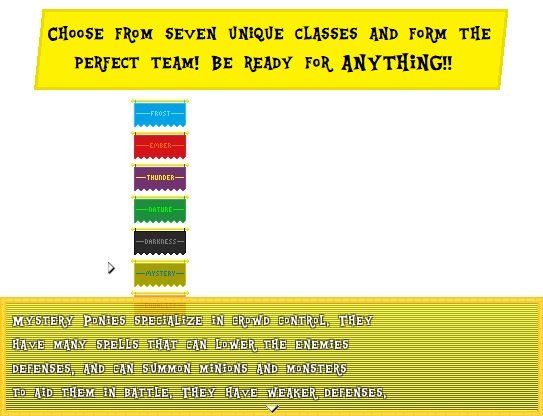 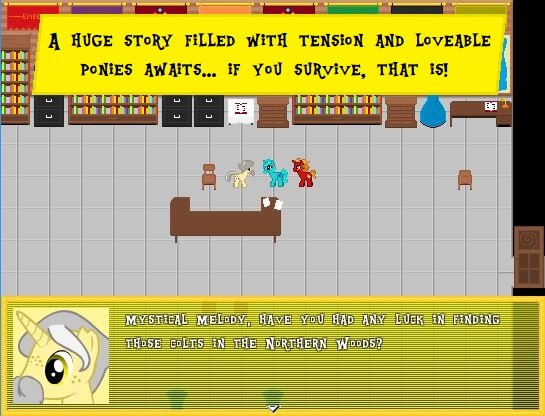 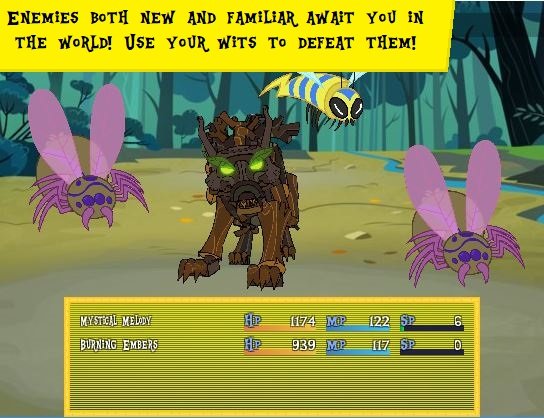 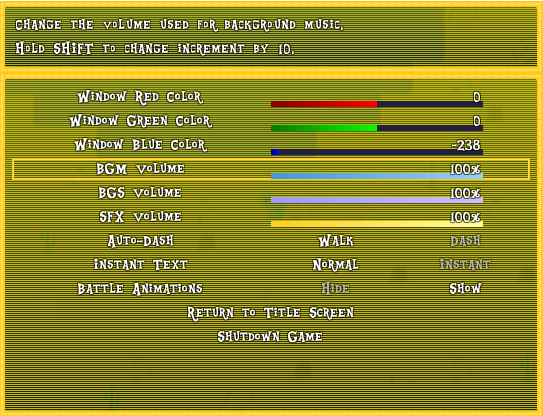