I'm a relatively new Pyro main (only at about 75 hours as of typing this out, and in fact at this point it's only my 3rd most played class after Sniper, who was initially my main and remains my top secondary, and Demoman, who's always been one of my secondaries), 300+ hour Pyro mains go easy on me. Also, I'll just leave you all with the list for now. I will say that pretty much every Pyro weapon above D is viable in my experience and f*** even D-tier weapons can be useful aside from stock melee which is worse than every other option than the dumpster fire that is the SVF and the Phlog is more than viable as well if it isn't properly countered by a Direct Hit/Liberty Launcher/Air Strike Soldier or really anybody else (except spies and Degreaser/Flare Pyros) with two brain cells. I will say that I think a couple of these placements are probably controversial, my Detonator placement is likely the best example. Also Dragon's Fury is underrated, even if it still isn't very good. 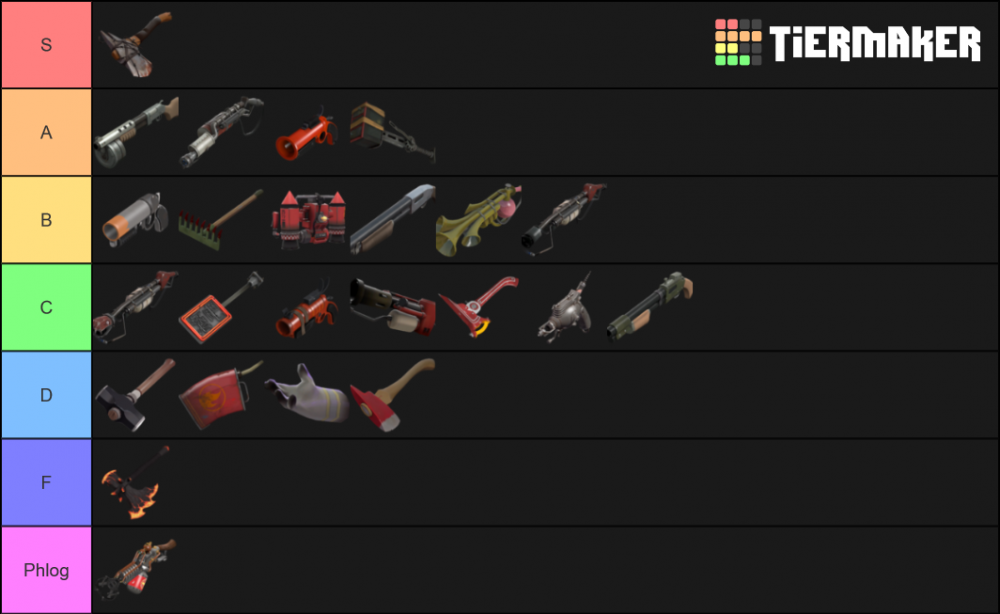 EDIT: A couple of adjusted placements and Rainblower added because of the taunt (which makes it slightly better than stock even if other than that and the Pyroland it's identical). I will however note this list will have no duplicates otherwise because all others offer no improvements over stock.