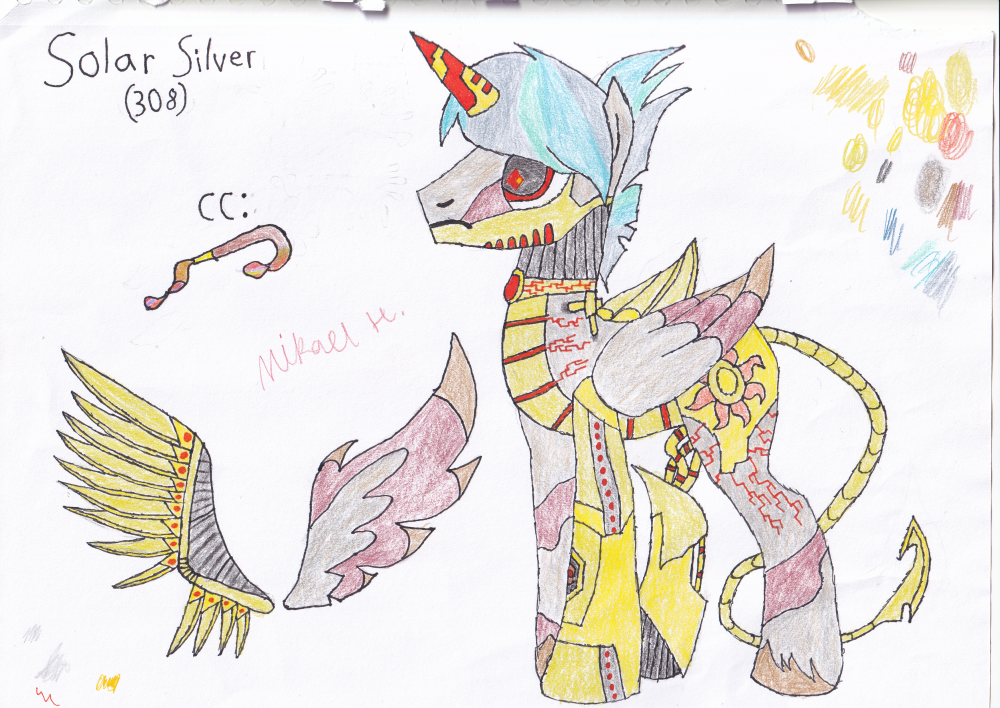 Red should be orange.

Name: Solar Silver [Soldier n.308]
Gender: Male
Species: Pegasus with artificial horn.
Talent: Painting/art
Personality and morals: Though kind and caring pony underneath, his duties under the Solar Empire has made him obedient and merciless soldier who does what his superiors tell him to without question, even if it contradicts his personal morals.
Skills outside talent: fighting/combat related skills. the countless sensors in his cyborg body allow him to 'sense' things normal ponies can't. in his own world, he has access to a database with all knowledge in the empire, but he also has a extensive database built-in, so even without that connection his knowledge surpasses that of an average pony. His enchanted body gives him many advantages over normal creatures, and he can take on most creatures known to Equestria.
Source of income: Military/???
Backstory in short:  In his world, Nightmare Moon was never defeated, and instead, in the first clash between Celestia and her sister, Daybreaker was born. The exact details are unknown, as both sides kept the information from the public, but that day started a war that to this day, over thousand years later, is still going. In the war there's 4 sides.

The Solar Empire, ruled by Daybreaker, it contains the eastern part of Equestria that has now mostly turned into a desert due to the never ending day. The Realm of the Night, or in short, The Night-Realm, ruled by Nightmare Moon, it is covered in dark forest and has eternal night, it contains the western part of Equestria. The Crystal North, what once was the Crystal Empire is now area protected by dark magic and crystals, it is believed to be ruled by Sombra, but nobody knows for sure as no one has found a way in. The United, not ruled by anyone specific, it consist everyone outside Equestria who have made an alliance to defend against the forces of Equestria.

Because of the war, technology in Equestria has advanced at great speed.

Solar Silver, or as he's known by his superiors, 308, is a soldier in Daybreaker's army, he was aspiring artist, and his talent and cutiemark showcase that, but because it wasn't something he could feed himself with, he was forced to join the army. He was relatively lucky though, as his father was respected general, and due to that he was chosen in one of the special units. These units had different missions, but they all shared one thing, the soldiers in them were 'given' (forced to have) certain body modifications (eyes, torso, the horn), making them super soldiers so to speak, and every time they got injured, the injured part was replaced with artificial, superior parts (the rest).

308 never learned to like it, but he followed orders as the other option was death, and he was forced to do lot of things he regrets. Nothing too special happened during his missions, but as time passed, he started more and more dislike his ruler, not that it changed anything, as her rule was ruthless, and any opposition would lead to death, this included trying to escape, because no creature had ever managed to leave Equestria unnoticed.

One day something odd happened, 308 was on a solo mission when suddenly his connection to the Solar Empire's database was disrupted, something that should have been impossible, and a mysterious creature came talk to him, this creature hid their identity, and they talked about things nobody should have known, before saying Solar was needed elsewhere and disappearing the moment they left his vision. After this the connection returned, and apparently it hadn't been only the database that had disconnected, as his superiors asked him why he had gone offline.

308 quickly forgot this event, as there was lot of things happening in the war, but about month later when 308 was on a mission at the front lines, he got hit by an explosion that knocked him out, but when he woke back up, he was somewhere else....

(I wrote this around midnight, so it's not a literary masterpiece)

OCs who he has met but aren't in backstory:
Depends on timeline