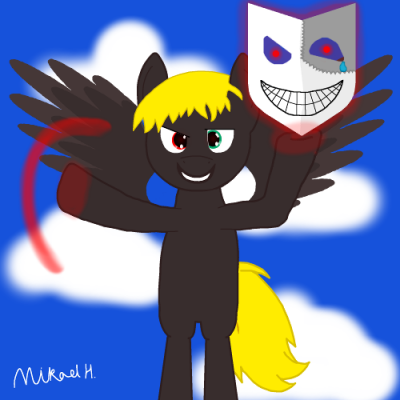 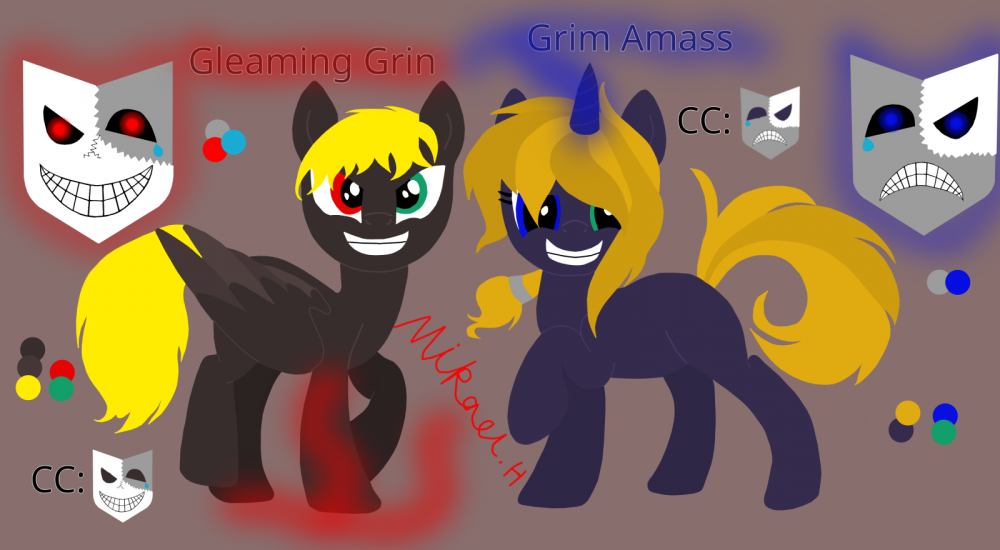 Gleaming Grin and his marefriend Grim Amass by me. 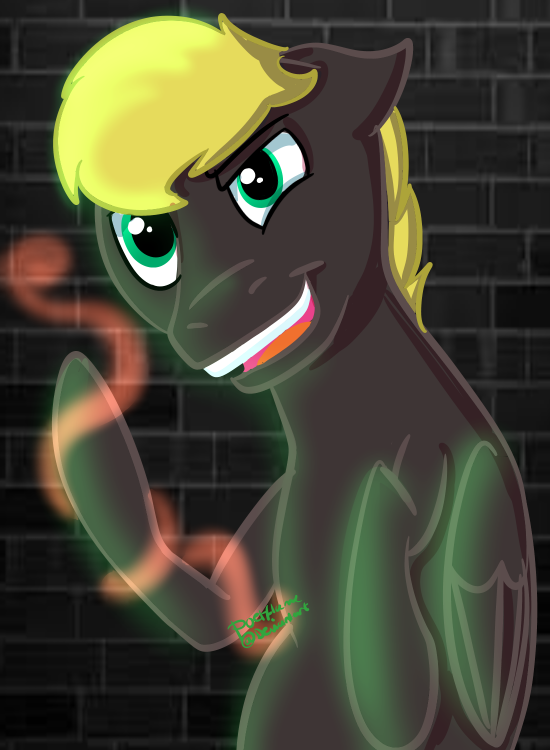 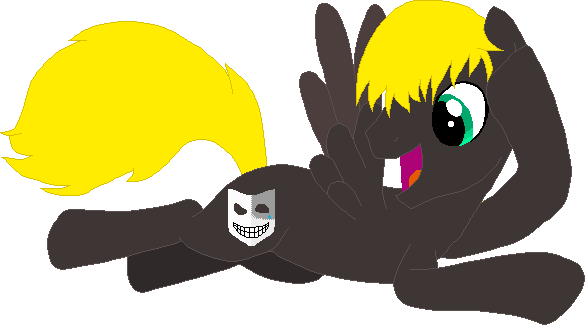 Name: Gleaming Grin
Gender: Male
Species: Pegasus
Talent: Magic
Personality and morals: Before corruption: Realist and brutally honest, but good-hearted and friendly all around, good morals. After corruption: Manipulative and selfish, no morals, even possible good deeds backed by foul intentions.
Skills outside talent: Hoof to hoof combat, flying, acting.
Source of income: Anything and everything.
Backstory in short: Gleaming's childhood was relatively normal, but his father wasn't much home due him being an explorer of sorts, so he was lot closer to his mother, who studied and sold things his father brought from his travels, introducing Gleaming to the interesting world of artifacts. In school age, Gleaming wasn't the most popular colt around, as most ponies found him to be creepy due a birth defect in his facial muscles that caused him to have a constant grin on his face, thus his name, but he never let that to get himself down, and eventually he managed to make friends with two ponies, Magic Potion and The Wanderer.

Change that would end up shaping Gleaming's life to something nopony could have guessed, happened during school years, Gleaming was getting frustrated when everypony around him, including his two friends, had started getting their cutiemarks, while he, regardless of his focus on studying artifacts, just couldn't get one, even with the fact that it was his passion at the time. So one day he walked to a near by forest, believing that if he found something himself, he would finally get a cutiemark, and he ended up being correct, as he found what looked like a mask from the forest, and being still just a colt, he curiously tried it on.

When the mask made contact, Gleaming felt surge of magic going through him, and he dropped the mask out of surprise, but when he looked at his flank, he saw picture of the mask, and thus concluded that the feeling was just him getting a cutie mark, and he happily ran back to his mother with the mask, and that was that, for a moment. First there was a voice, a voice inside Gleamings head that spoke to him, claiming to be the mask, then, others heard the voice too, until one day, the mask's eyes lit up in red glow, and the mask started moving by itself, following Gleaming everywhere, but turning invisible when other ponies were around.

The Mask explained that it granted great power to those fielding it, but that there were negatives, first being that it was impossible to get rid of after bonding with it, and rest, it never told. "The great power" made its first appearance few weeks later, when Gleaming got pissed off at a pony who went bit too far with the creepiness claims, and wave of red magic flew out of his hoof, injuring the pony pretty badly, this naturally didn't make him any more popular.

Since then his life was learning to control, and finding ways to get rid of the curse that was the mask, which like the mask had said, ended up being impossible, as even princesses didn't manage to get rid of it. His friends also helped him with his goal to best of his ability, and for some time, even some catpony helped him, but he disappeared as suddenly as he had arrived.

But eventually the battle was lost, and The Mask took over, corrupting Gleaming's mind to its will, and he hasn't been seen again...for now.....but rumors go that he has met a mare who managed to win over his corrupted heart.


OCs who he has met but aren't in backstory:
He, She, It, and They.
Others depend.