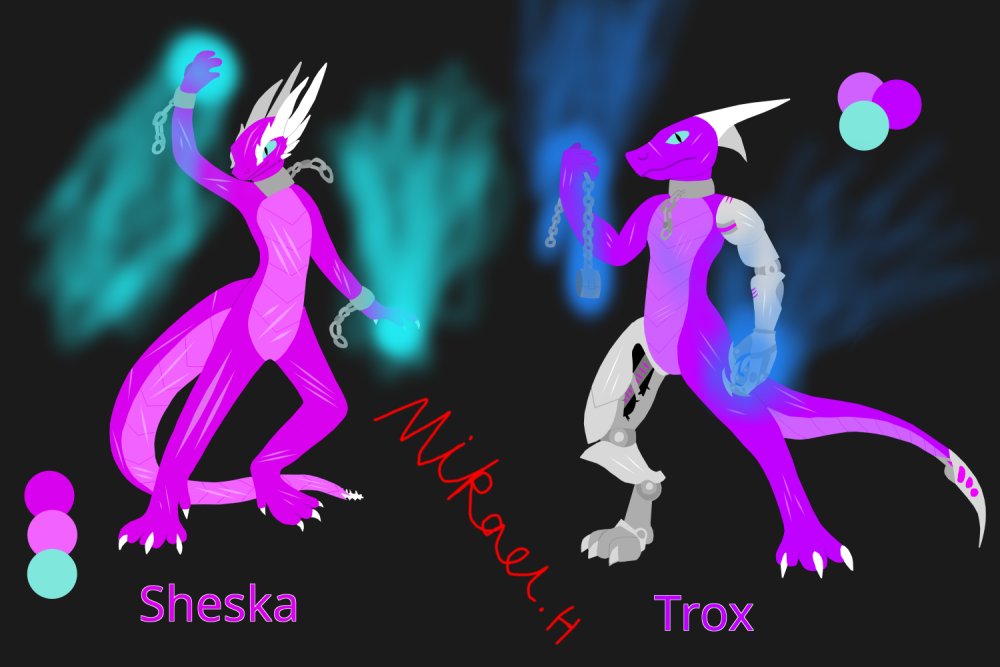 Names: Sheska and TroxGenders: Female and Male Species: KoboldPersonality and morals: Sheska is caring but quick-tempered, many times acting before thinking, she can turn from a friendly almost child-like to furious and dangerous in moment's notice. She has very curious mind, and because of that she likes to investigate things she hasn't seen before in situations where she feels safe. She's also bit of an hoarder, having grown up with barely anything, and is very protective of things that she sees as hers, including her brother and any other living creature she may form a bond with.

Trox in turn is his sister's counterbalance, he's cool-headed, calculating and more reserved in general, he rarely loses his cool, even under grave danger, but there is exceptions, as he is very protective of his sister, and will react strongly to defend her, even overreacting in some situations, which partly comes from his overall caring nature. He too shares a bit of his sister's tendency to hoard, but while Sheska hoards anything she likes, Trox focuses more on the usefulness of what he gathers.

What comes to their morals, they share the same ones, believing in doing good and being good, but they also believe that sometimes less moral actions are necessary for one's own survival or the greater good.
Skills: Their agile and quick bodies combined with their fighting skills makes them powerful fighters both unarmed and armed, and what they lack in physical size and strength, they more than make up with their magical capabilities. Trox is also experienced tinkerer, while Sheska knows thing or two about taking care of injures.Source of income: -Backstory in short:
Info about their world can be found here https://mlpforums.com/blogs/entry/25250-solar-silver-oc/

Born in The Realm of the Night, Sheska an Trox lived relatively good life at first, they didn't have much as was the case for most civilians in the war, but they got enough food and they had a roof over their head, and that was all they could have asked. They were home schooled, as schools were all military schools and it was hard for physically weaker creatures like Kobolds to get in, not that it was even tried, as their parents didn't want them to go in one. Their parents taught them a lot, including fighting and magic, and while the twins found it bit odd at the time, those skills ended up being crucial later in their life.

Normal life lasted through their childhood, but around their teenage years, things took a turn, when the twins were woken up by their parents and told to run, there was no explanations, no goodbyes, just the order to run, and so they did. When they later returned to their home, it was no longer there, the building had been burned to the ground, and their parents gone, witnesses said it had been a raid by the Royal Nightguard.

This started a chain of events that lead to them learning of small rebellion group that their parents had started, it was tiny and rather powerless, but having no other place to go, the twins decided to join the efforts to go against the tyrannical rule of Nightmare moon. To say that the rebellion was a failure was an understatement, but that didn't stop them from trying, and the group itself grew bigger as time went on. Trox lost his leg and one of his arms during the various efforts of the rebellion, but thankfully they had gained access to some outdated but still highly advanced replacement parts, allowing him to gain those back in mechanical form.

The twins were a big part of the struggling rebellion's operations for years, but unfortunately their luck had to run out eventually, and they got captured, getting locked up in one of the various high-security dungeons, where after brutal "interrogation" they were locked up in their own cells and put in what was to be endless sleep.

But it wasn't endless, as something happened, one day, the both siblings woke up in their cells, still chained up, and while their magic was still suppressed, something seemed to be wrong with the security systems, the building was on emergency power and the various machines in the cells had lost connection, something that was supposed to be impossible. Neither of them celebrated yet, as this could be just a small error and guards would soon come to solve it, but no guards came, and eventually even the backup power shut down, shutting down all the security, including the magic suppressing fields in the cells.

This was their chance, and with some effort both of them made it out of their cells, only to face a collapsed hallway, which they started clearing little by little and moving forward slowly, it was very time consuming and exhausting, but they had no other choice. During their slow progress, they found the guards, crushed under the rubble, and after a while Sheska fainted from fatigue, as she had gotten the worst of the "interrogation", and while they had technically been in sleep for unknown amount of time, it wasn't the kind of sleep to give you rest.

Being exhausted himself, after carrying his sister while also clearing the way for hours, Trox was on the edge of giving up, but then he saw something that confused him, light, and not just any light, but sunlight, he didn't believe it, they were underground, in the darkest parts of Nightmare moon's forever dark forest, and there was sunlight coming through the rubble? Where were they?....

OCs who they have met but aren't in backstory:Depends