Over 20 years ago (aging myself here now *sighs*) I saw a cartoon called Heidi's Song, an animated movie based off the story of Heidi.

What made this movie so unique was the fact that it was not all upbeat and cheerful (although the art style and sweetheart main character betrayed this). There were two very particular scenes that were quite scary and dark - one involving the old man telling Heidi about the beasts in the mountains which resulted in a trippy, artsy scary fantasy scene; and the other involving an old woman locking Heidi in a cellar to be killed by rats (or as I remember that is)

The movie has been lost in the analogs of history. I only saw it a few times as a kid and never again since then. However, after discovering an old movie by Jim Henson that I loved, I decided to hunt down a VHS copy or at the least, a pirated version of Heidi's song. I mean, is the Star Wars Holiday Special exists out there, surely this would.

Imagine my shock when I discovered that as of last year, Heidi's Song has been released for the first time ever on DVD. I snatched this movie up and it is due to arrive tomorrow.

For 20+ years I've waited to see this movie again...It really holds a special place in my heart as it was one of the first films that I have seen that had an upbeat sweetie of a character but some really dark and scary moments (something I'd start to become obsess with as an adult)

I am so excited to sit down and watch this movie after over two decades of waiting... 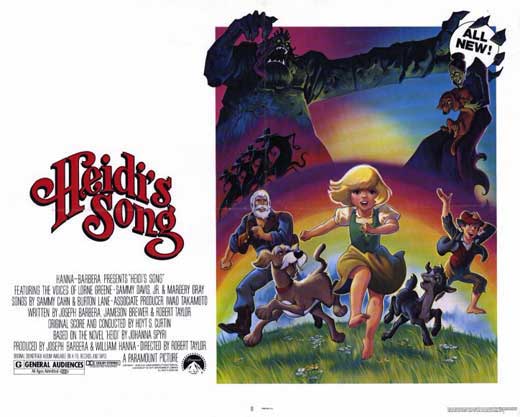 I just hope it is as good as I remember.