I plan on doing a top 11 list for the best stories later, but we might as well get the bad ones out of the way first. Save the great stuff for last, as it were. No point sugarcoating this intro: these episodes are pretty freaking bad/not good, and demonstrate the worst that Matt Smith's era had to offer. Probably not definitive, though some of these picks are pretty hard to argue with.

So, let's get this over with.

5. The Doctor, the Widow, and the Wardrobe

Any scene where the Doctor is trying to impress the children is hilarious and the final scene where he returns to the Ponds after two years is sweet, but everything else is a bit of a slog. It's immensely cheesy, even for a Doctor Who Christmas special, not enough happens to warrant a 60 minute runtime, and I feel sorry for any little boy who had to sit through that "anyone who is not female is automatically weaker" section with their sisters. Unlike the much better special from the previous year, this one doesn't do anything interesting with the work it's paying homage to.

Sure, the Ponds' departure is heartfelt and allows Smith another chance to showoff how good an actor he really is. Unfortunately, it doesn't make up for how much of a mess the rest of the episode is. The arbitrary rules involving time travel are flimsy at best and frustratingly arbitrary at worst, it's overblown like the worst of Russell T. Davies's run, and the Angels are no longer effective, with the major visual gag behind the episode only serving to make everything more illogical and questionable.

3. The Impossible Astronaut/Day of the Moon

Sorry, but this episode really, really rubs me the wrong way. It starts off intriguingly enough and it sets up themes that would be handled by better episodes later, but it's disappointment from there. It's a very unsatisfying and confusing tale that can't stand on its own and features a large amount of style and made-to-be-iconic images over being able to understand what the hell is going on. The Silence are cool and everything, but the way they are dealt with is a little too bloodthirsty for the Doctor. Why use cunning, wit, and diplomacy to defeat an enemy when you can just order their execution and shoot your way out of their base? Truly the work of a writer known for the cleverness of his scripts.

2. Journey to the Center of the TARDIS

Should have been a fun, in depth tour that would please longtime viewers, but instead became a boring and surprisingly grim tale that only showed-off the TARDIS's hallways. The Doctor acts like a total asshole for no reason, the development of his and Clara's relationship and understanding of each other is erased for no reason (which begs the question as to why it was brought up at all), and it ends with possibly the most egregious example of "time reset button" we've seen in Moffat's run. For no reason. Poo to this one, folks.

1. Victory of the Daleks

One of the all time worst Daleks stories ever (and that's saying a lot) and one that fails to live up to the awesomeness of its title and concept. Winston Churchill is cool and everything, but he isn't saving this one. It's silly in the worst possible way, it's tedious, it asks you to suspend your disbelief way too many times, the characterization of the Daleks is off, it's themes are empty and serve only as window-dressing, and it all builds up to an embarrassingly-awful Dalek redesign that nobody liked. Except for the people selling the new action figures, that is. 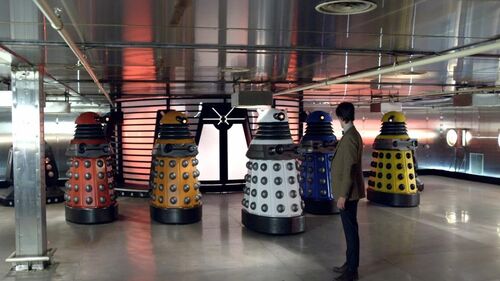 "YOU WILL COH-LLECT US ALL OR YOU WILL BE THE OUT-CAST ON THE PLAYGROUND!!!"

Never before or since has an episode of the show been so blatant in its intention of selling merchandise, and three years later it's still a low point for Moffat's run.

Glad that's done. On to the good stuff later.

Sound off in the comments if you agree/disagree, have another episode you think is worst.