“Whining”? I am not “whining,” I am complaining. Do you want to hear whining? – Rarity

Rarity is hard at work in Carousel Boutique as she puts the finishing touches on her latest creation. Hearing the bell at the door ring, she turns to find a living legend in her shop: Sapphire Shores, the Pony of Pop! Ms. Shores even greets Rarity by name, saying that she heard of her through a rave review in a fashion magazine, and has come to buy a SENSATIONAL! outfit for her latest tour.

Rarity quickly shows the Pony of Pop the piece she has just completed… a dazzling, bejeweled outfit. Sapphire immediately agrees to purchase it, but she also wants 5 more. Rarity, having used up her whole stock of jewels, faints at the thought of having to get more.

She enlists Spike’s aid for the task, since he’s a good digger. Although no doubt he would do it for free, she promises Spike that he can eat some of the gems for a reward… just as soon as they have enough to get started on the new clothes. As she uses her magic to find the gems, and as Spike digs them up, they are unaware that some Gollum-like creatures are watching them… Realizing that Rarity is the one who can find the gems, they decide to kidnap her.

Meanwhile, Rarity decides that she had enough gems to be going on with, and gives Spike a huge blue gem for his reward. Overcome with gratitude and infatuated as he is, he decides not to eat this gem, since it’s a gift from Rarity. Suddenly, Rarity’s horn automatically activates (again proving Twilight wrong about “magic only happens when you want it to happen”) and detects another jewel – this time up in a tree.

Unfortunately, this jewel is on the collar of a Diamond Dog. Despite Rarity trying to be friendly, this Dog is obviously up to no good, advancing menacingly as the pony and dragon back away. Suddenly, his companions ambush them from underground.

Although Spike and Rarity put up a bit of a fight, eventually, they grab her and pull her underground, leaving Spike behind to scream his denial to the heavens. Quickly fetching the rest of the Mane Six, Spike leads them to the place Rarity was captured. There they find the entire field is covered in holes. Although they bravely try to get down one, the Diamond Dogs start filling them up, then use their home ground advantage to thoroughly defeat them. 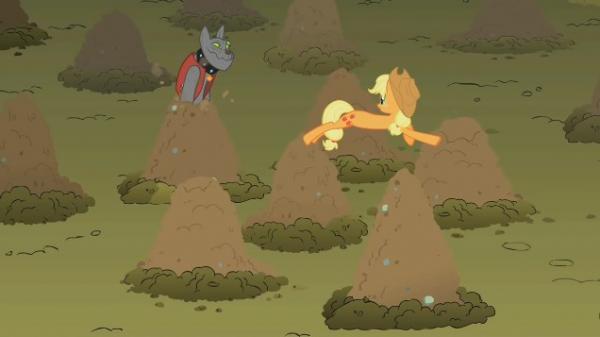 Since pure force seems unable to help them, Spike hits upon the idea of using his gift gem from Rarity as bait. Seemingly, dragon skin has natural pockets…

Finding an open hole, he dangles his prize on a line. Twilight says he’s very selfless for giving up the gem Rarity gave him (point of logic: how did she know it Rarity gave it to him when she wasn’t there at the time?) and Spike has a little imagine spot of his own, where he is an older, well-built, brave dragon knight, who single-handedly beats the Diamond Dogs and their little dog minions too (point of logic: how did he know what they looked like, since he only saw the three leaders previously?) with his lance (compensating for something?) and dragon fire. Then he bursts into Rarity’s cell, where his damsel in dis dress is waiting for his rescue. He goes in for his victory kiss as the vision ends… 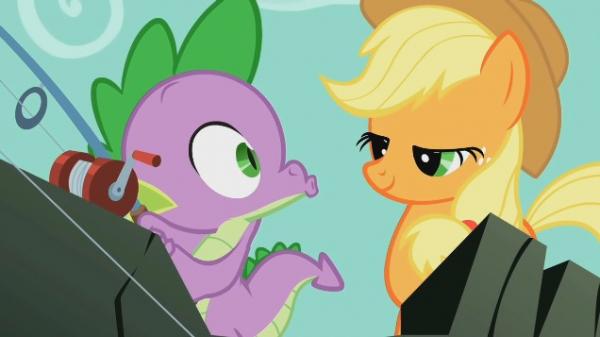 Awkward… At least AJ doesn’t seem to mind too much.

This Kodak moment is interrupted by the Diamond Dogs taking the bait, pulling Spike towards the hole. The rest of the Mane Six grab onto him, but they are all pulled in anyway. Pinkie, of course, jumps in because it just seems like fun. Dragged through the tunnels (Pinkie riding on Flutters’ back and laughing in glee the entire time), they end up underground… but now have no idea which way to go. This prompts another Big No from Spike. He comes up with the idea that the tunnel with the most gems will lead them to Rarity. Now if only somepony else knew the gem finding spell. Luckily, it just so happens that Rarity once showed Twilight how to cast it (and welcome back to Plot Convenience Theatre!) and it reveals every jewel in the entire room. They start off down the corridor.

In another part of the cave, Rarity apprehensively asks what the Diamond Dogs mean to do with her, but is relieved when she hears they only want her for her gem finding skills. She shows them a pocket of gems, and asks to be let go. Instead, the Dogs want her to dig them up. She does… one scrape at a time. Frustrated, the Dogs ask the other dogs to dig them up. Instead of her digging, they decide to make her haul the cart as she searches for ALL the jewels. She does so, but keeps up a constant tirade about the working conditions, the poor hygiene and various odours from the dogs themselves. They try to shut her up, but Rarity keeps on with her verbal punishment, demanding that they call her Miss, Rarity, or Miss Rarity rather than “pony”.

They really get more than they bargained for when they tell her to “stop whining.”

In the wake of this auditory assault, the Dogs end up caving in to all her demands, decorating the chamber, fanning her and providing her with water, all just to keep her quiet. Realizing that their dignity is at stake, they try to reassert themselves and put the harness back on her, whining or not. But when one of them slaps her rump and calls her a mule… 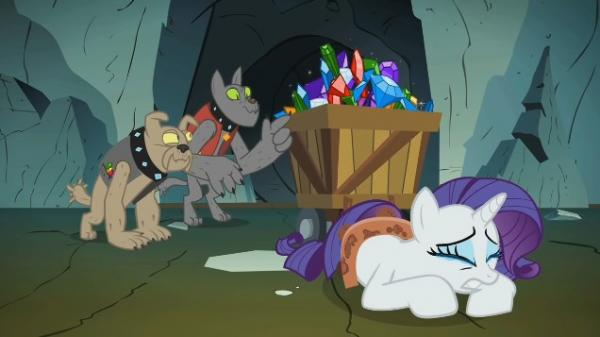 “This is another fine mess you’ve gotten us into…”

As the Mane Six approach, the dig dogs try to capture them, but end up being bucked off. Just then, what sounds like a fight breaking out comes from the next chamber. Spike tries to ride Twilight into battle, to her indignation. She relents, though, and carries Spike through the doorway… only to find the Diamond Dogs running away from Rarity, and begging the Mane Six to rescue them!

Rarity greets her friends and Spike and enlists their help to haul several wagons full of gems that the dogs dug up for her. The Diamond Dogs are just so glad to be rid of Rarity that they let them leave with every single gem. Back on the surface, Rarity reveals that she had control of the situation the entire time, and Twilight congratulates her on teaching her that being ladylike does not make a person weak, and that wit and quick-thinking will triumph over brute force.

Being a Rarity focus episode, particularly one that highlights her intelligence and adaptability, and confounds the expectations of her being weak and helpless, you know I’m contractually obligated to love it!

Some fans focus on Rarity’s whining in this episode as a negative, but here, I found it entirely justified. One needs to realize that it’s all just an act that Rarity put on, specifically in order to get an advantage over her physically stronger captors. That’s why it’s annoying to me when fans decry it and even more so when they act as if it’s typical of Rarity. Heck, there are much better reasons to call her whiney in “Over a Barrel”, which I’ll cover when I review that episode at a later time, so using this particularly scene to find fault with Rarity is rather unfair.

That scene is absolutely hilarious to me, especially the “oh crap, this is going to suck” expressions on the Dogs’ faces. And once whining is no longer effective, she switches to crying, prompting even one of the Dogs to glare at his compatriot for making things even worse.

Of course, the contrast between how the others imagine events are unfolding and what actually happens is funny in its own right.

There are some good references that parents can get, such as the Diamond Dogs being poachers, and even hiding in the trees, which is a nod to the David Bowie song. There’s also the Lone Ranger bit between Spike and Twilight, which almost certainly wouldn’t be noticed by teenagers or preteens.

Spike’s entire rescue fantasy scene, for just being such an over the top “all-conquering hero” daydream, and ending with Spike in real life puckering up to Applejack, of all ponies.
AJ: “Woah, there, lover boy!

Pinkie deciding to go for a ride on Fluttershy.

Rarity’s epic whining, topped off with the following:
Diamond Dog: “STOP WHINING!”
Rarity (even louder): “But I thought you waaanted whiiining!”

Spike (on Twi’s back): “Hi ho, Twilight! Away!”
Twilight: “And what do you think you’re doing?”
Spike: “Please, Twilight. Just give me this?”
Twilight: *sigh* “Fine…” *Rears, neighs and charges*

Pros: Highlights Rarity’s intelligence and wit, as well as her rising prominence in the fashion world. There are some really funny moments, including those wonderful imagination spots. We see some Bowie and Lone Ranger references, unusual in a cartoon.

Cons: Rarity whining is a very hit or miss scene: fans either love it or hate it. The concern of Spike being taken advantage of by Rarity rears its head again, especially when she takes away the gem he was eating at the end, but at least she does reward him earlier in the episode.