The preparations for the Ponyville Foal and Filly Festival are done, and the event is about to start. Pinkie Pie is of course thrilled at the prospect of having a giant party with the young ponies of Ponyville. But Rarity is also looking forward to it as she puts the finishing touches on a puppet theatre she was commissioned to do, with Spike looking on and complimenting her, as is his wont. Unfortunately, Rarity lets her tendency for form over function get the best of her again, and her client ends up with a really beautiful but utterly useless puppet theatre. It neither travels nor has enough room for the performance, and the puppeteer promptly announces his disdain at the offering before storming off. Rarity is naturally devastated, and goes into a funk, curled up on her chaise longue, crying over her failure and gorging on carton after carton of Vanilla Oat Swirl ice cream. Unable to console her, Spike decides to visit the Castle of the Royal Pony Sisters Library, along with Owlowiscious, to find a spell that can help her.

Behind a secret door, Spike finds a spell book bathed in lurid green light on a pedestal. The lock on the gate is no match for his fire breath. He grabs the grimoire, oblivious to the obviously evil exterior and the fact that the stairway is crumbling beneath his feet as he casually walks back to the main room. Owlowiscious is far less sanguine, but his hoots of protests are brushed off by Spike as he reads the title of his acquisition: Inspiration Manifestation (roll credits *ding!*). The subtitle explains more: the spell instantly brings ideas to life.

Returning to Rarity, he succeeds in convincing her to try out the spell despite her lingering depression. Reading the spell, Rarity’s own magic is replaced by the magic of the book. As part of the incantation, we learn the only way to break the spell: speaking words that are true. 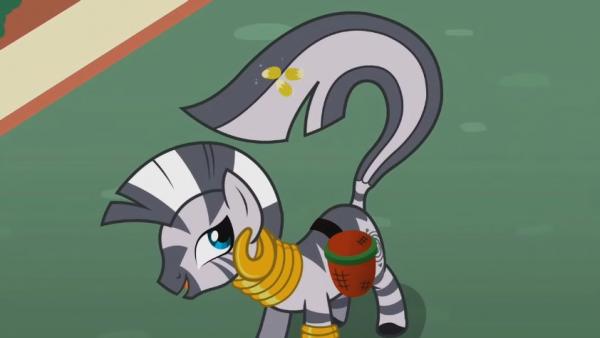 After upgrading first the cover of the book and then her fainting couch to prove the spell works as advertised, Rarity thanks Spike before setting out to adjust the puppet theatre to something more practical. The new design is a hit with the puppeteer, who declares that Rarity has redeemed herself, despite being suspicious as to how exactly she managed it. Rarity quickly silences Spike when he’s about to let Opal out of the bag and claims “trade secrets”.

Having saved the day, Spike decides to return the book to the Castle, but Rarity asks him if she can keep it for just a bit longer. He agrees, and goes home for the night. Returning the next day, Spike goes to the Boutique to get the book, and finds that Rarity has been up all night effortlessly creating design after design. About this point it becomes clear that Rarity’s sanity is slipping under the influence of the spell. She ropes Spike into a new endeavor: secretly (just between the three of them) using the book to provide “beautifying upgrades” to the village.

After a morning of incognito transmutation, Spike is finally realizing that Rarity is going too far. After she runs off alone to do more “improving”, Spike meets up with Twilight. She is of the opinion that some kind of new villain must be responsible. Resolving to steal the book away and end the spell, Spike chases after Rarity, after finding a subtle hint as to where she might have gone. 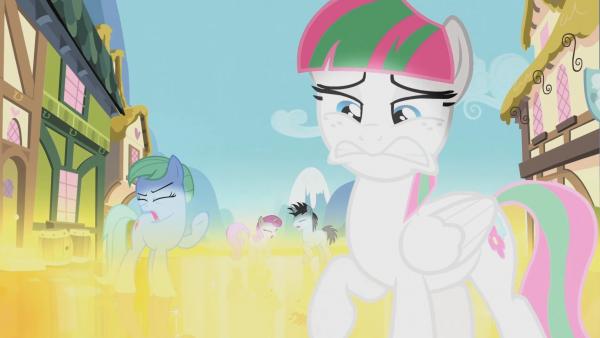 Hey, look, they got Blossomforth right this time. Looking at you, Rainbow Falls.

Finding her on a nearby hill, Spike eventually manages to pickpocket the book away from her, and is forced to swallow the book whole (presumably destroying it with his fiery dragon digestion). Despite this, it seems the spell is still very much in effect. Realizing she doesn't even need the book anymore, Rarity totally loses her perspective, claiming that she is going to entirely transform Equestria itself with her new-found powers. 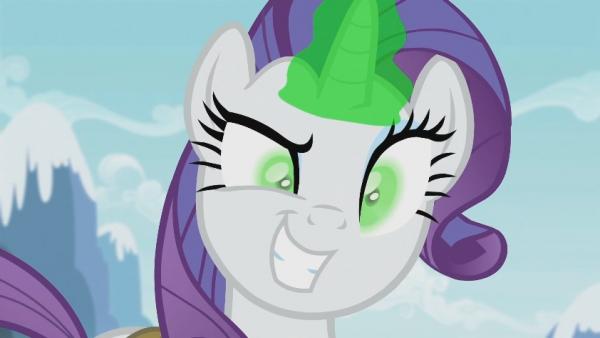 And that’s the right way to turn Rarity into a villain. Looking at you, Nightmare Rarity comic.

Seeing just how far round the bend his friend and crush has gone, Spike flatly refuses to let her continue down this path. He finally tells her what he really thinks of her recent actions: that while she might have the power to change things, that doesn't mean the changes are good, and that he fears he has let Rarity become “something awful”. With these candid words, Spike inadvertently triggers the ending condition for the spell, the magic dissipating and leaving behind a rather disorientated Rarity, who seems surprised to learn that she was the cause of “something quite terrifying” happening to Ponyville. She also tells Spike that he should never be afraid to be honest with his friends.

Spike writes the friendship lesson he learned into the journal, just before Twilight returns home, having spent all day with both Princess Cadance and Princess Luna fixing his mistake. She firmly reprimands him for taking spell books out of the Castle Library without asking. Spike applies his new lesson and tells her that she doesn't look so good right now, making this perhaps the first time Twilight hasn't been happy at the end of a story.

This episode is certainly a much better offering than the previous episode, which I gave a pretty hard time. First and foremost, it was a Spike episode, which is a… I don’t think I need to make that joke, you make it in your head already… while Rarity was in more of a supporting role. Spike actually learns a decent moral, and even the way the secondary moral is brushed aside is very much in line with Spike’s tendency to miss the point. He also deserves praise for being brave enough to tell Rarity "no", despite thinking it would be the end of their friendship. On the negative side, one could say his usual obliviousness was taken to extremes for the sake of the story. Which is, I have to say, one of the less worthy ways to generate a plot.

On the positive side, I feel that this episode was presenting a rather realistic (in terms of the show, of course, not real life) way in which you could turn Rarity into a villain – give her the power to effortlessly realign the world into something more congruent with her own sensibilities, under the belief that she knows better than other ponies how they and the world should be. The scariest demonstration of the power of the spell comes in during the party scene. There, she quite clearly altered the appearance and behaviour of the clown and musician ponies themselves. Although most of the time she seemed to stop short of actually overriding the will of the “benefactors” of her power, that seems more like a decision on Rarity’s part than a limitation of the power of Inspiration Manifestation itself. A frightening thought, indeed. Given that it took three alicorn princesses to undo the damage (with difficulty) that was done by one pony (effortlessly), one wonders whether even Discord could defeat Rarity when she is wielding the power of her. Creative! GENIUS! Oh, and Inspiration Manifestation, of course. 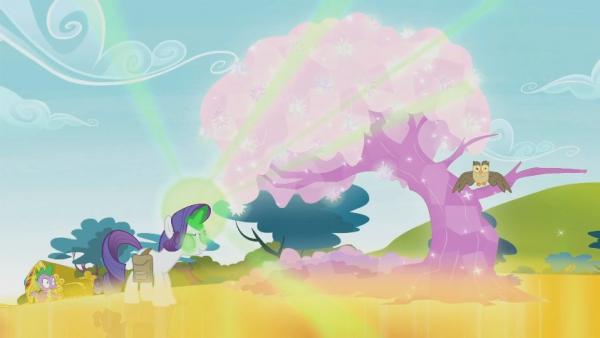 There would be a caption for this picture, only I just got turned into a golden statue of a fox...

Some other random thoughts: it was an interesting inclusion of Sweetie Belle’s parents actually spending time with the filly, and we finally see her dad without a hat to confirm that he is actually a unicorn. I also noticed Dinky was “paired” with a pony who was definitely not Derpy (Amethyst Star, I think), while other known sibling groups were also shown, such as Thunderlane and Rumble. Speaking of Derpy, did she even appear in this episode? I don’t recall seeing her. Not that it’s evidence against the common fanon of Dinky being Derpy's foal, but they could have used that opportunity to confirm the link for certain. (What double standard?)

The other Mane Six all made token appearances, providing a few yuks, especially the bit where the poor robin was trapped in his new birdmansion. Although that was a bit of fridge logic… 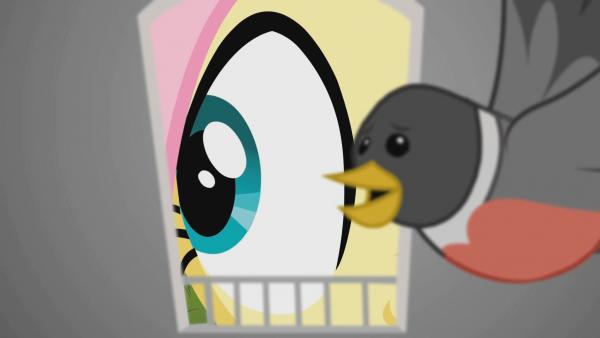 Fly towards the eye of the pony giving you the directions, ya dumb boid!

All in all, an enjoyable episode, focusing on the problem that Spike almost unleashed upon an unsuspecting Equestria.

First...
Rarity: We shouldn't even tell anypony that it's me who's behind all the fabulous changes I'll be making! Won't that be a fun little secret for the three of us to share?
Spike: The... three of us?
Rarity: You, me, and the book, of course.

Then the brick joke:
Spike: *sighs* I can't do it. I promised I'd keep all of this between the three of us!
Owlowiscious: *hoots*
Spike: Of course it's weird she meant her, me and the spell book. But– The spell book! Of course! If I can get it away from her, I bet she won't be able to use its magic anymore! *Owlowiscious rolls his eyes* Oh, come on, it's the perfect plan! I... just have to figure out which way she went.

Cue ponies crying out about the blinding gold-paved streets.

When Spike blames Owlowiscious for taking the book, the hapless owl gets this long-suffering expression on his face as if to say, "Whelp, time to take one for the team..."

Pros: A good day in the limelight for Spike. A believable “start of darkness” story, and rather frightening potential for Rarity to become a true force of evil. Spike learns a good moral about being honest.

Cons: Perhaps he should have learned “don’t take things without permission” moral instead. Stretching Spike's ability to ignore details to an uncomfortable degree.

May you never be improved against your will and stay sunny side up!