OK, good afternoon everypony, and welcome to another edition of "Batbrony Reviews." Sorry for taking so long to get around to this review, just been preoccupied since the episode. This should be a pretty short review anyways overall, not a whole lot to say with this episode since, well, it was a pretty basic and simple episode. Without further ado, let's dive into "28 Pranks Later"!

So let's get this out of the way, this is just an alright episode. It's not outstanding, it might have some stuff that might tick people off, but overall, it's just OK, and sometimes OK is fine. In this case, I certainly think that is so. The lesson is serviceable, and actually has broader applications beyond the episode context. Basically, it's all about when joking in general goes too far. We all probably know a coworker or some friend or family member who doesn't know when enough is enough when it comes to joking (and this doesn't just have to apply to pranking). This is actually a more serious character flaw than one might think at first glance, after all, who doesn't like a good joke? But when you think about it, people who get too hung up on joking and being humorous ALL THE TIME can come off as flippant, frivolous, and not to be taken seriously because they don't seem to take anything seriously. That's what Dash's problem was here; she was making jokes at the expense of others, not taking their reception of her behavior into account. In an attempt to prove she was the best at something (as Dash is want to do when she believes she's been challenged), she actually proved to be the worst in becoming to zealous in her efforts. If nobody besides her was enjoying the pranks, what was the point? Now some of the pranks by themselves might seem harmless enough, but let's keep in mind that the whole town clearly knew what she was up to by the middle of the episode. This is no different than when the town turned on the CMC after they discovered they were the ones running a gossip column. It was a collective anger and annoyance which made perfect sense and was perfectly reasonable and understandable. 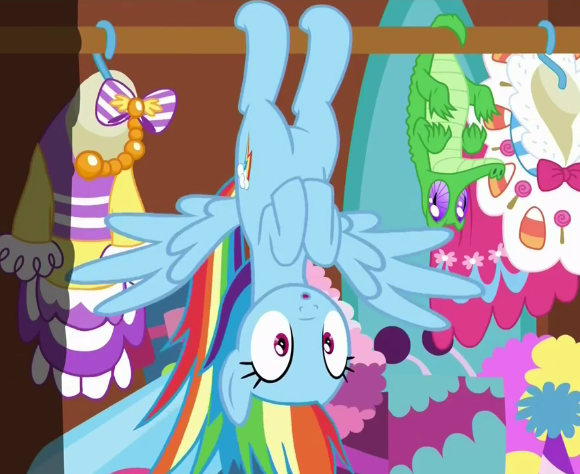 How is this face scarier than ANY of the zom-pony bits were?

As for Dash herself, I didn't think she was out of character. Some people will immediately point to her scaring Fluttershy as the biggest sin of the episode given that she and Pinkie had agreed in the past not to prank her. But consider a few things. First, that was ALL the way back in Season 1; just because she's matured doesn't mean Dash, anymore than the rest of the Mane 6, is any less capable of still screwing up or doing something wrong. No one else was around to tell her otherwise, and she was probably just bored the first time. The second time she was out at that point to prank everyone because, to reiterate, she felt like her pride and prowess had been challenged, and the episode did right by having all her friends point out that it wasn't just mean, but also lazy to prank a pony as easy to scare as Fluttershy, so there was an awareness from the episode itself that it was unusual for her to do so. Overall, Dash was just being a knucklehead, and I don't see why that's hard to believe her doing, even in Season 6; she's still one of the more stubborn characters, plenty liable to making a mistake, certainly not a Mary Sue. I thought she was fine, and she learned her lesson more than enough in the end. It was interesting too that, if you paid attention, she didn't really go after Pinkie Pie in her pranking; she gave her a soft prank, probably for two reasons, (1) she was scared that if she got her too bad that Pinkie would retaliate, and (2) Pinkie didn't really go against her at the beginning. Very interesting to consider both of those points, if you think about it.

Seriously, is RD loaded or something, how much money did she spend on these pranks?!

Finally, the humor, while not gut-busting, worked for the most part. I was slightly disappointed that the zom-pony bit didn't go further, but it worked for the most part. I think the most disappointing aspect of it was the title; being called 28 Pranks Later, I kinda wanted them to spoof 28 Days Later and have the "zom-ponies" be super fast. But no, like we've seen in many, many cartoon zombie spoofs, it was a Night of the Living Dead spoof, and a pretty basic one at that, but it was still pretty funny. Honestly the two biggest laughs came from Harry the Bear (seriously, he just steals the show when he gets decent screen time) and RD's last bit where she pretended like she hadn't learned her lesson. Overall though, like I said earlier, this was just an OK episode, but I'm OK with that. It was pretty clear that a new writer had worked on it (which has been kind of apparent a couple of times this season), but again, not every episode has to be a masterpiece. This did what it wanted to, and I'm fine with it for what it is. That's all I got for ya this week everypony, until next week this is Batbrony signing off. I'm off! *cue dramatic exit*