The oldest and most prestigious motorcycle race in the world, only the best race at the Isle of Man.

​The Isle of Man is a small island located in the Irish Sea surrounded by Northern Ireland and England. Every year in May and June motorcyclists descend on this island for one of the most challenging races in the world.

Overview:​ The Snaefell Mountain Course uses closed public roads for high speed motorcycle racing during the event. The course is very challenging even for expert riders, at 37 miles long it hosts over 200 turns and drastic increases and decreases in elevation. The course is situated around the main roads linking towns and villages to island's capital, Douglas. At its highest point the course is nearly 1,400 feet above sea level. 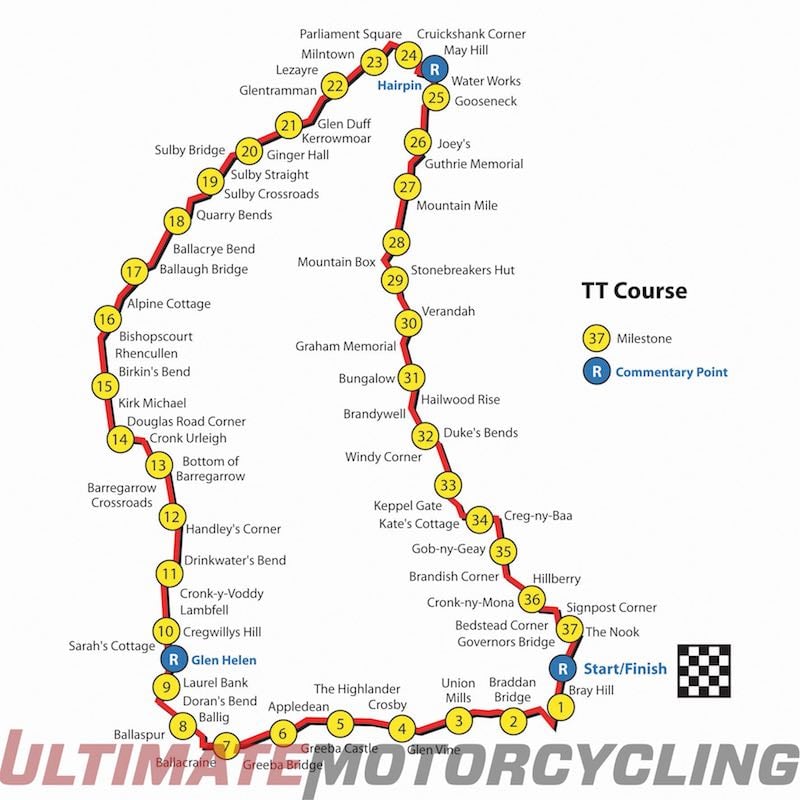 Snaefell Mountain Course Waypoint Sheets are drafted by competing teams to better help riders memorize the course. However because course takes place on closed public roads instead of a racetrack it can be difficult to remember. The best riders on this course are often of Manx, Irish, Scottish or English background due to being able to ride on the course year round.

​Riders can get very close to stone walls, fences and other road hazards at high speeds

The Isle of Man TT is also a time where Motorcycle Manufacturers and Equipment Manufacturers show off new products. Honda Powersports and Dunlop Tires are among the most successful. The Honda CBR 1000 RR is one of the most popular motorcycles at the TT. Others such as BMW, Yamaha, Suzuki, Kawasaki and Ducati also have a presence. Privateer teams receive support from the manufacturers to compete.