And here, at long, long last, we are: the final episode of Samurai Jack. When last we left him, it seemed Jack had finally been beaten by the shapeshifting Master of Darkness… and Daddy’s Little Destroyer. Let’s see how this all pans out…

What Happens
Throughout the land, all the various peoples and groups that Jack had encountered gather around their viewing devices in dread, because Aku is making an announcement. Aku uses the opening from previous seasons to preface his gloating. Then Aku himself appears, showing off the captured Samurai Jack and his sword. In order to break the spirit of his subjects for all time, he is broadcasting live his final victory in finishing off Jack… if only he could decide quite how to do this momentous event just right…

Jack pleads with Akushi to fight, but it seems to have no effect, and Aku finally decides to let her have the honour of killing his defeated enemy. However, before the final blow is struck, the armies of every group still able to put up a fight attack Aku’s tower. In the ensuing battle, Jack is blasted free. He tries to get the sword while Aku is distracted by the others, but Akushi stops him.

While able to inconvenience Aku to a degree, the armies of good are unable to actually do any significant damage, and Aku even starts using his evil to create an army of his own. Things seem to be looking bleak for our heroes, but then the Scotsman’s ghost arrives with the red-haired, reindeer-riding cavalry! 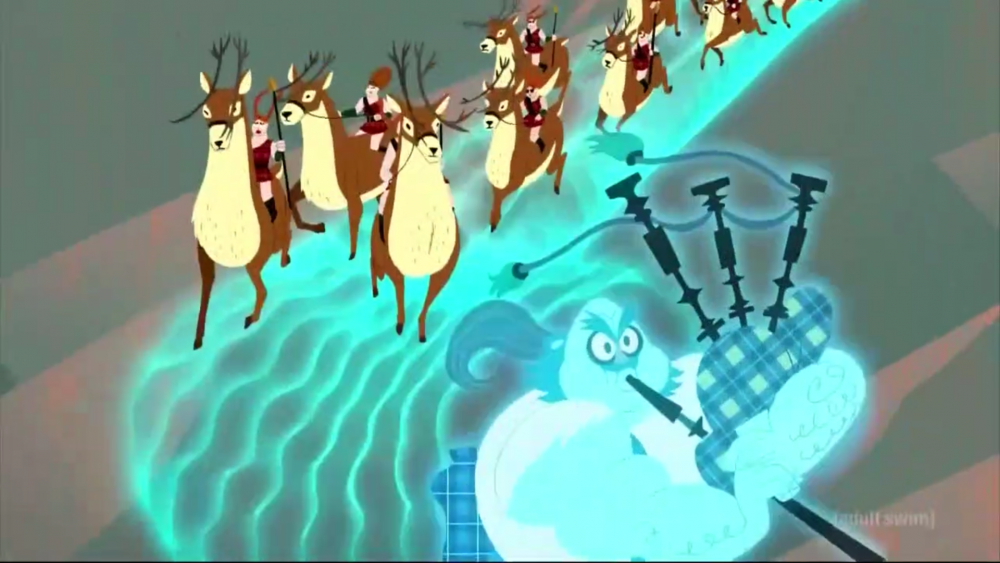 Using a set of mystical ghostly bagpipes to transport his daughters through the sky, and to launch an attack powerful enough to affect Aku himself, the Scotsman reunites with Jack, naming each of his daughters and offering Jack his pick. 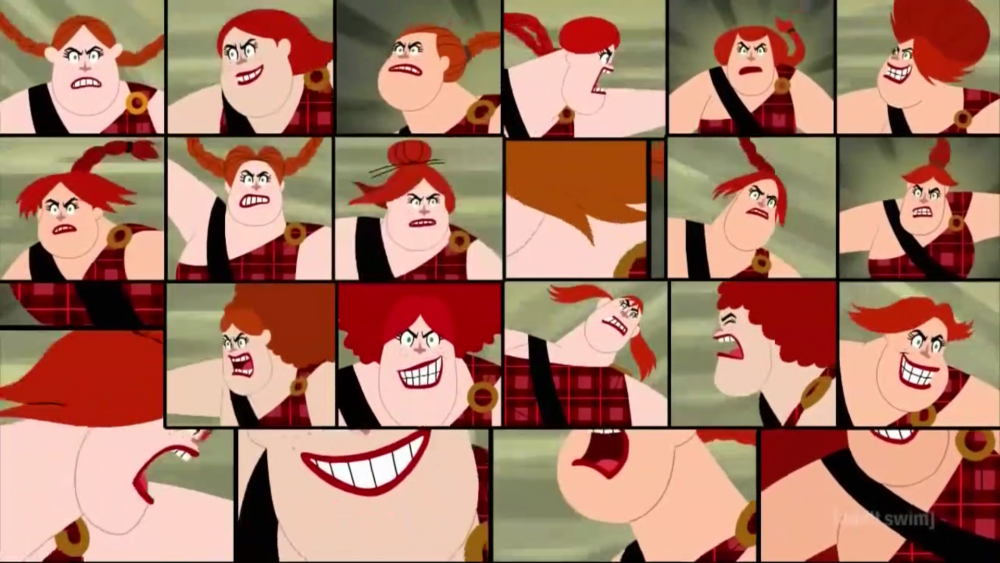 I think the last one’s name is Ovalylongag…

Jack demurs and shows the Scotsman his new girlfriend… but, said girlfriend still being a black blob of Aku’s evil at this point, the Scotsman is less than impressed.

Aku, frustrated by the attacks on him, launches himself into the sky and rains down spears of darkness, to devastating effect. The armies of good are being routed, until the Scotsman uses his bagpipes to create a shield, and even destabilize Akushi. Jack is caught inside Akushi's roiling black blob, and struggles to reach Ashi, who is still fighting the ocean of darkness. It seems like they will lose the struggle, and Jack desperately shouts to Ashi that he loves her.

Ejected from Akushi, Jack lands flat on his back, and Akushi begins to choke him to death. (Now there’s an erotic asphyxiation meme waiting to happen.) Then her hold on his throat loosens as Ashi, empowered by Jack’s confession of love, manages to overcome the evil, reverting to her black catsuit look. Aku orders her to kill Jack again, but this time she is in control and denies Aku as her father. He attacks and she fights back with the same powers that Aku has, like eyebeams and shapeshifting. It seems her victory over Aku’s compulsion hasn’t severed her access to his powers. All his powers… as Jack and Ashi both quickly realize, that includes time travel! Ashi stretches her arm to grab and return Jack’s sword. Then she uses her screech powers to make a portal back to the past and, as Aku realizes with despair, it’s one he can’t interfere with or destroy.

Back in the past, the initial fight between the as-yet-nameless Samurai and Aku plays out as before, with Aku sending him into the future… however, Jack and Ashi arrive back in the following moment. Aku chokes out what will turn out to be his final words, “You’re back already?!” as Jack wastes no time using his sword to cut down, trap and then destroy Aku once and for all.

Soon after, all the people the Samurai trained growing up, as well as all the citizens of the Empire, are gathering for his wedding to Ashi. As she walks down the aisle towards him, she suddenly stumbles and collapses. Jack runs to embrace her, as she tells him what is happening: since Aku was killed in the past, he never donated his evil essence to the Cult in the future and thus Ashi was never born. She fades away, leaving Jack clutching her empty wedding kimono.

The disconsolate Jack rides his horse through a misty gloomy forest. He sits down by a tree and mourns. A ladybug lands on his hand, and he slowly smiles with renewed hope and lets it fly away, as the sun comes out and lights up the same trees that Future!Aku had destroyed. The screen fades to black as the title “Episode CI” lingers. 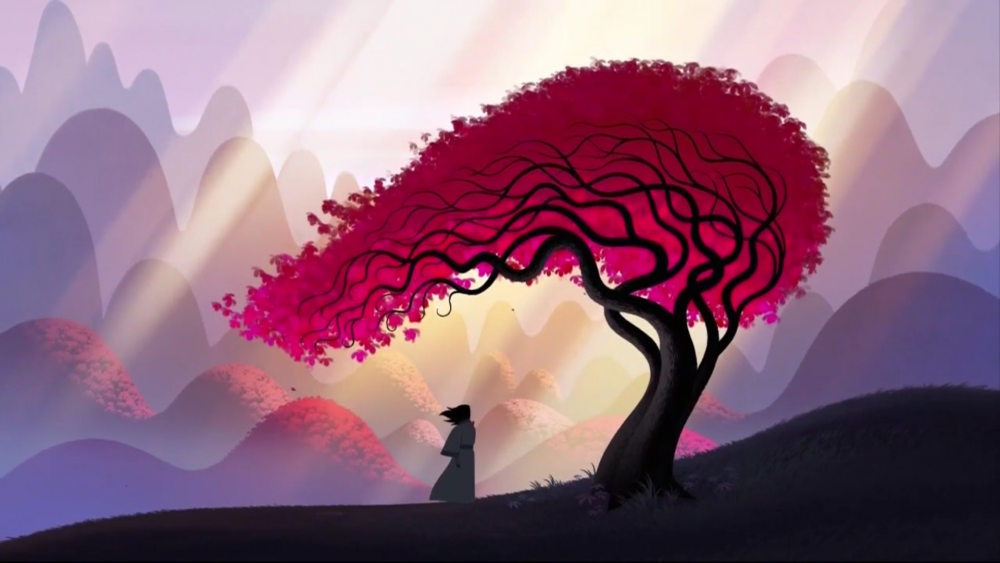 So beautiful, it almost makes me forget the writers tearing my heart out and stomping on it...

Thoughts on the Episode
And thus the curtain falls on Samurai Jack. It’s been a long ride, with many ups and downs. I’m glad that we got this final Season to resolve Jack’s story, but… sob… They killed Kenny ret-goned Ashi! 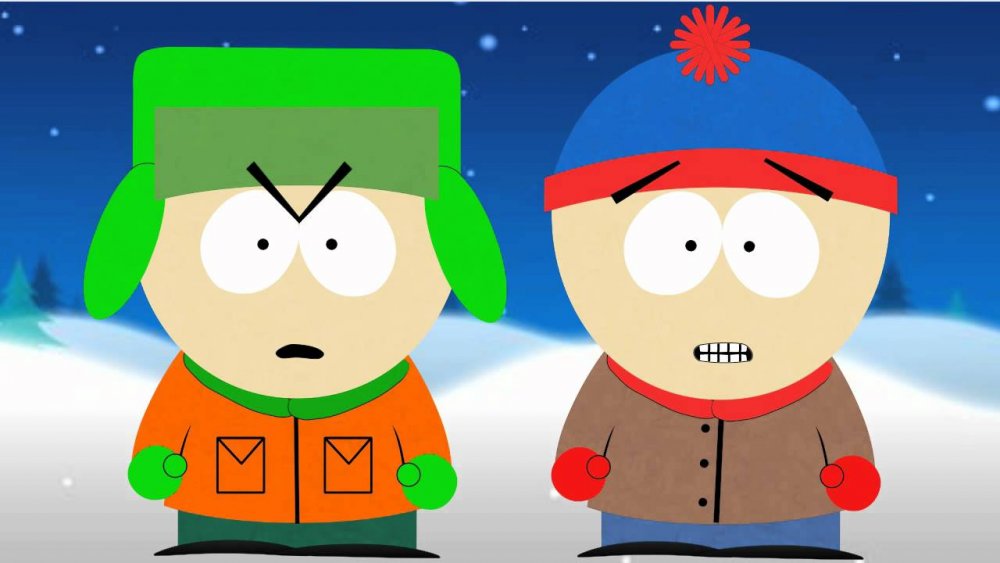 In a way, I admire the sheer brass testicles / ovaries of the writers that led them to go this route, but… why? Why can’t we have nice things?! I didn’t think something like this would happen, really, even given how dark Season 5 could get. This… this was just mean-spirited. And it’s not like it was a necessary consequence of time travel, either. You can’t simply resolve the grandfather paradox by erasing Ashi. If Ashi didn’t exist, Jack would never have gone back to the past, thus wouldn’t have been able to kill Aku and thus make Ashi not exist. (I’m not going to do the cross-eyed joke! I’m not in the mood.) And then there’s the fact that Jack still remembers her… unless the ending scene is meant to imply that the memory of her faded away eventually, just as she did – unlikely with the way the scene was shot and how Jack’s expressions were shown, but still something your mileage could vary on. Speaking of delayed-reaction reordering of timelines, that’s another weird thing… why did it take so long for Ashi to be affected? Just so that the timing could be even more sucky for our poor hero? Dick move, writers, dick move. I mean, I can understand making the artistic choice they did, but I really did want Ashi to get her happy ending with Jack. I'm just really sad I didn't get to see my prediction come true... instead, heartbreak. But I'll live.

If I were able to rewrite the ending, it would go like this… Jack and Ashi arrive in the past the moment BEFORE the Samurai gets sent to the future. Jack and the Samurai team up to take out Aku, and kill him with a super-cool double magical sword strike. As Aku dies, Ashi feels Aku’s evil leave her, as before, but as Jack tries to help her up, their hands go through each other.

Jack and Ashi realize that preventing the Samurai from going to the future in the first place means they, the second copy of the sword, and the future timeline of Aku’s reign (coincidentally, virtually the entire series itself) all will cease to exist. After taking a short time to explain to the Samurai what would have happened, they start to fade away. Jack and Ashi redeclare their love for each other and share a final kiss as they fade out of existence, saddened but consoled by the fact that they are leaving existence together. The Samurai revels in his victory over Aku and the celebrations begin.

Jump ahead a while, the Samurai is married, with a new born heir being held by the new Empress, wife and mother… who just happens to look a lot like Ashi. Bam! Perfect happy ending… Ashi still goes out, but now so does Jack, who now never had to suffer those 50 years of despair. We can still have our victory at a price without leaving the hero to suffer alone. Since the Samurai was never affected by Aku’s time travel, he ages perfectly normally, thus removing the question mark over whether or not Jack is still immortal. The Prophecy of the Guardian’s time portal is also resolved by never actually having happened, so the inconsistency of Jack’s older appearance in that vision vs the events of Season 5 is reconciled. All tied up with a neat bow, thank you very much! It’s such a pity the writers didn’t consult me, I coulda set them straight… sigh.

Other thoughts: So in the end, the Guardian was apparently killed by Aku. I had hoped we might see him one last time… even if it were merely a flashback to witness the battle between them. Seeing the various friends Jack had made reappear en masse makes his absence even more notable. At least the Scotsman got his chance to shine and reunite with Jack.

Oh, the irony… Aku managed to destroy all the time portals, yet still sowed the seeds of his own destruction by “blessing” the Cult of Aku. This lead not only to Ashi being born, meeting Jack and helping him regain his determination to destroy Aku, but also equipped her with the exact necessary power to negate all his efforts at preventing Jack’s return to the past. Add in the fact that he could have won if he had simply done to Jack what he did to the Scotsman a few episodes earlier and the Pie of Irony is complete, ready to throw in Aku’s flaming-eyebrows, fang-mouthed face. Heh.

Overall, Season 5 has been a fun but bumpy ride. I give you my thanks for joining me on this journey. I may or may not write a review of the whole of the season/series at a later time, and I think I should probably start on FiM Season 7 like I’ve been saying I’ll do for the past couple of months. Please look forward to it, and join me again in the future. In the meantime, feel free to give your own perspectives in the comments. How did you feel about how the season wrapped up? Do you think my ending would have been better? (Because I do.) What did you enjoy most about the season? What did you enjoy least? Share your thoughts. And until the next time we meet, stay sunny side up!